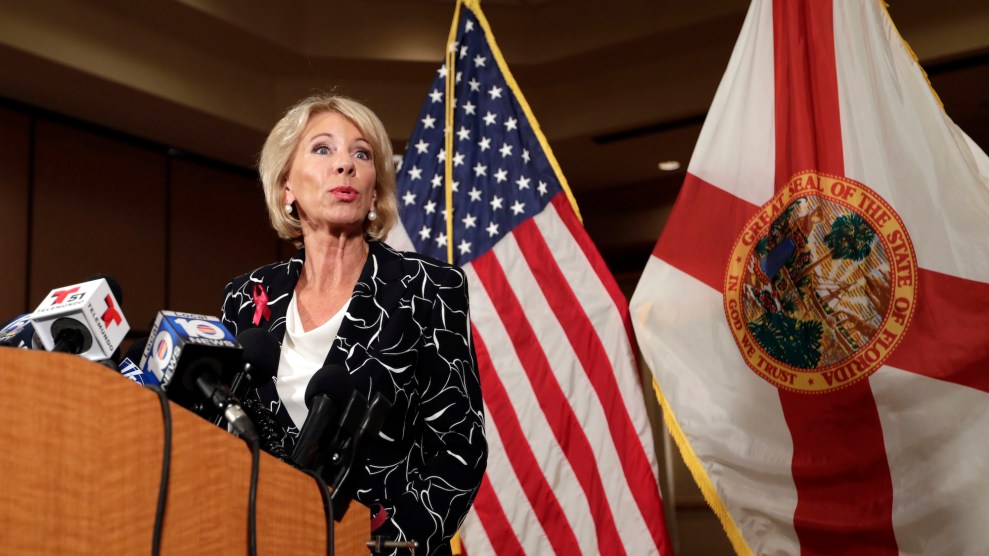 As students across the nation walked out of class Wednesday to demand gun control, Ryan Petty, the father of one of the 17 people killed in the Parkland massacre, proposed an alternative course of action. “I would encourage the students to not only walk out, but walk up,” he said to lawmakers during a Senate hearing on gun violence and school safety, a sentiment he echoed on Twitter later that day.

#WalkUpNotOut—the idea that students should “walk up” to their peers in order foster a friendlier, more inclusive school environment—gained momentum in the days leading up to Wednesday’s national school walkout. It’s premised on the notion that reducing the amount of bullying and ostracism that occurs in school can also lower the potential for violence. Some have criticized the idea as an oversimplification of the factors that lead to gun violence, but research indicates that it’s an effective means for improving schools safety—more than 4,000 mental health experts endorsed guidance to that effect late last month. What’s more, the idea has found an ally in Secretary of Education Betsy DeVos, at least when it comes to her rhetoric. “We must acknowledge issues of loneliness and isolation,” she said to the PTA Legislative Conference on Monday. She added, “We must find meaningful ways to help them reconnect, and we must address social-emotional learning.”

But when it comes to actually running her department, DeVos seems to have a very different set of priorities. Two days before the Parkland shooting, the Trump administration released its 2019 budget proposal, which outlined DeVos’ plan to scrap funding that could be used to promote the very “walk up” movement that DeVos has so enthusiastically endorsed.

DeVos’ budget, if approved by Congress, would eliminate Student Support and Academic Enrichment Grants, funds given directly to local school districts that can currently be used for, among other things, promoting “safe and healthy students.” The Education Department’s October 2016 guidance lists examples of the types of programs the grants could support, including “promoting supportive school climates,” “implementing systems and practices to prevent bullying and harassment,” and “developing relationship building skills to help improve safety through recognition and prevention of coercion, violence and abuse.” In other words: the very sort of preventative activities DeVos says she would like to see more of.

The grants, made available under the 2015 Every Student Succeeds Act—legislation that governs the nation’s primary and secondary education—have been lauded by experts in social and emotional learning, a school of thought that promotes teaching skills such as cooperation, self-management, and empathy alongside traditional academics. States received $400 million in federal funding through the program in 2017. While states have broad discretion in how to allocate those funds, some, like Nevada, have prioritized social and emotional learning initiatives. This is actually DeVos’ second attempt to eliminate the program. The omnibus 2018 spending bill, which Congress is expected to vote on next week, provides $500 million for the grants, despite DeVos’ efforts to dismantle them.

The #March4OurLives supporters will accomplish only two things. 1. They'll exercise their 1st Amendment right. 2. They'll get a little exercise. If you really want to stop the next school shooter #walkupnotout pic.twitter.com/9kY3k53xcr

DeVos’ budget would also eliminate funding for a program that helps schools pay for counseling and conflict resolution for students exposed to pervasive violence, as well grants for student programming during non-school hours, which can be directed toward school safely initiatives.

According to the Education Department’s budget proposal, the programs slated to be eliminated “have achieved their original purpose, duplicate other programs, are narrowly focused, or are unable to demonstrate effectiveness.” Speaking specifically about the Student Support and Academic Enrichment grants, the department has stated that other federal, state, and local resources can cover these activities, and that the amounts awarded under existing formulas “would be too small to have a meaningful impact.” But the funds that remain in the proposed budget mostly support such initiatives only tangentially. For example, while the Education Department would devote $42 million to School Climate Transformation grants—which provide funds that could also be used to address bullying and violence—it would prioritize schools that would use the funds to address the opioid epidemic.

The good news for “walk up” proponents is that the budget proposal is more indicative of the Trump administration’s priorities than actual future spending levels. Trump’s 2018 wishlist bears little resemblance to the appropriations bill Congress will vote on next week. Lawmakers will also have the opportunity to grill DeVos about her spending plans on Tuesday, when she appears before a House committee to discuss her department’s 2019 budget.