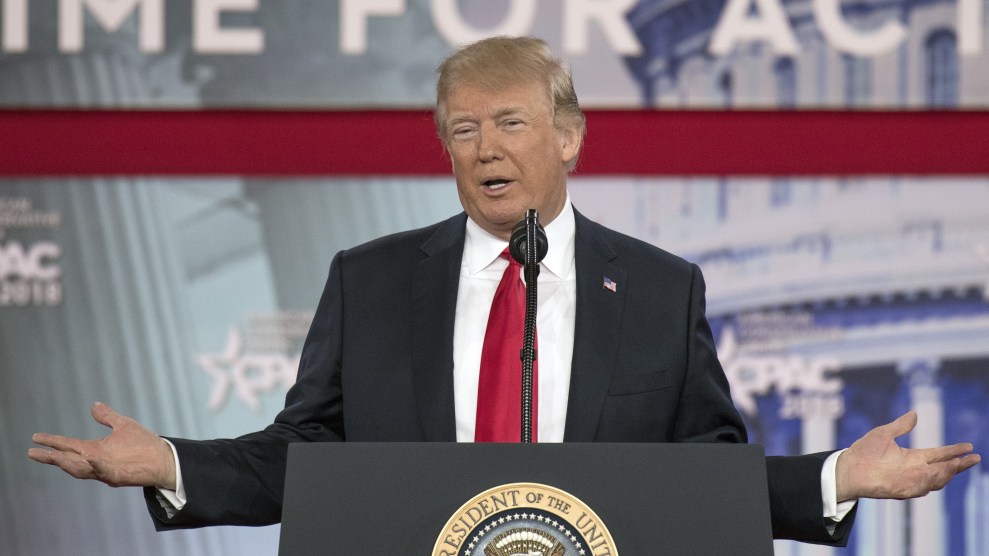 On Friday morning, President Donald Trump delivered an often-improvised speech at the Conservative Political Action Conference that ran about 30 minutes longer than scheduled. Trump told the crowd that he believes his administration has had the best first year of any presidency in US history.

Following the Parkland, Florida, school shooting that left 17 people dead, Trump asked the crowd whether they’d prefer to keep the tax cuts Republicans passed last year or the Second Amendment rights that he said Democrats would eliminate. After gun rights received far more applause, Trump said, “I’m gonna leave it at the Second Amendment. I don’t want to get into that battle.”

WATCH: President Trump poses questions to CPAC crowd: “If you only had a choice of one, what would you rather have? The Second Amendment or tax cuts?” https://t.co/LfZRkoMely pic.twitter.com/RT8UecJXoX

Trump also attacked the “crooked media,” adding that “we had a crooked candidate, too.” Attendees responded by chanting, “Lock her up.” Trump followed up to say, “Boy, have they committed a lot of atrocities.” He did not specify which atrocities he was talking about.

The CPAC audience chant ‘lock her up’ as Trump refers to Clinton pic.twitter.com/QVGHRGNwJj

It was not the only old battle Trump returned to. The president also went after his frequent adversary Sen. John McCain (R-Ariz.) for voting against an Obamacare repeal bill last year.

President Trump appears to slam Sen. John McCain over 2017 health care vote: “I don’t want to be controversial so I won’t use his name. What a mess.” https://t.co/LfZRkoMely pic.twitter.com/rlpcIeLSra

After attacking an armed sheriff’s deputy who took cover outside during the Parkland shooting, Trump called for arming teachers with concealed weapons. “The beauty is it’s concealed—nobody would ever see it,” Trump said before adding that a “teacher would have shot the hell out of him before he knew what happened.”

Trump at CPAC: If teachers carried concealed guns in Florida, “a teacher would’ve shot the hell of out him before he knew what happened” pic.twitter.com/nzbLg52eBZ

Trump accused Democrats of abandoning Dreamers—young undocumented immigrants who came to the country as children. In September, Trump moved to end protections from deportation for nearly 700,000 Dreamers. Earlier this month, Democrats overwhelmingly voted to fund Trump’s border wall in exchange for providing a path to citizenship for more than a million Dreamers. The proposal failed after the White House demanded steep cuts to legal immigration along with the wall.

Trump at CPAC: The Democrats “don’t want to do anything about DACA” pic.twitter.com/IGDWfCfjpx

Trump also read the lyrics of “The Snake” to warn Americans about what he sees as the dangers of immigration. The song describes a woman who takes in a snake that gives her a “vicious bite” instead of “saying thanks.” The “reptile” tells her “You knew damn well I was a snake before you took me in.” After reading the line, Trump threw up his arms and said, “That’s what we’re doing with our country, folks.” He reportedly received a standing ovation.

Uplifting stuff from Trump, who’s out here reading a race-baiting poem about “a vicious snake” who repays “a tender woman” for her hospitality with a deadly bite. pic.twitter.com/5CYZylUKOv

Trump’s speech was billed as a chance to unveil new North Korea sanctions. But he only briefly mentioned the country at the end of his more than hour-long speech. As Trump left the stage, the Rolling Stones’ “You Can’t Always Get What You Want” played in the background.