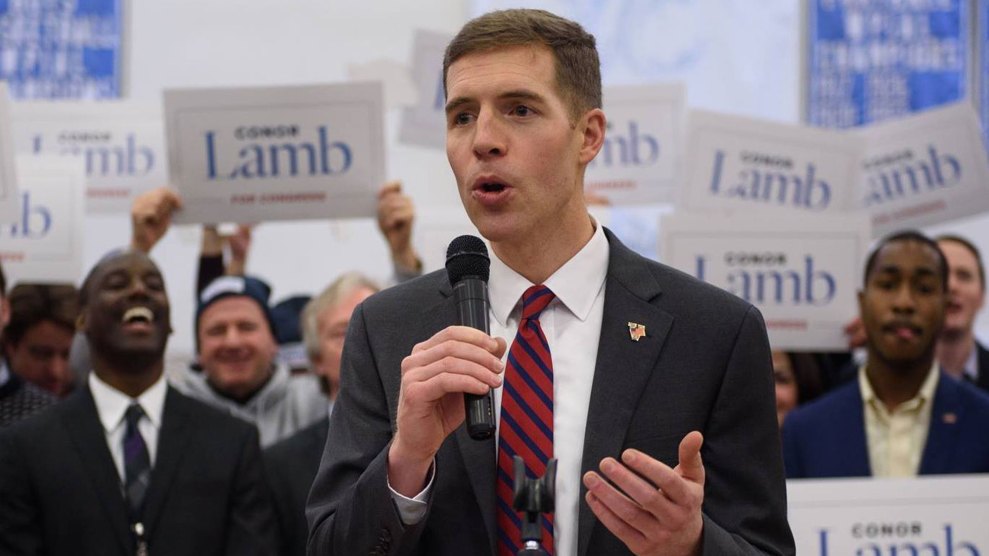 In January, Stephen Sherman started a new weekly routine. Sherman, a retired business analyst who dabbles in street photography, coordinates phone-banking for his local Indivisible chapter, one of thousands of similar “Resistance” organizations that popped up in the aftermath of Donald Trump’s election. Every Monday night, from 6 p.m. to 9 p.m., up to a dozen Indivisible members gather in the living room of his Scarsdale, New York, home to make phone calls, send text messages, and write postcards to registered voters in Pennsylvania’s 18th Congressional District—urging them to support Democrat Conor Lamb in next month’s special election.

Sherman has company. Hannah Laurison, the Philadelphia-based co-founder of Pennsylvania Together, a coalition of 500 Resistance-style groups from across the state, has received hundreds of inquiries from volunteers and grassroots groups in 11 states who are interested in helping put Lamb over the top. Responding to the growing interest in the race, Laurison’s group has launched its own “Blue B&B” program to find free couches and guest rooms for out-of-state-volunteers making weekend canvassing trips to the district. The group has also helped line up volunteers to write postcards to registered voters and phone-bank from their living rooms.

The activities of newly minted organizers like Sherman and Laurison come while outside Democratic groups have been slow to get involved in the race for the seat, which opened up last fall when Republican Rep. Tim Murphy (no relation) resigned following revelations that the pro-life congressman had pressured a woman he was having an affair with to get an abortion. On paper, the 18th District, which includes parts of the suburbs of Pittsburgh along with more rural areas of southwestern Pennsylvania, seems to be trending away from Democrats—Trump carried it by 20 points in 2016. It may not even exist in a few months, if a court order to redraw unconstitutionally gerrymandered lines is upheld.

In comparison to last year’s marquee House special election, in Georgia’s 6th District, the Pennsylvania front has been quiet. In the Georgia race, the Democratic Congressional Campaign Committee dispatched nine staffers to the district in support of Democrat Jon Ossoff and convened three focus groups, while pouring $5 million into independent expenditures. Planned Parenthood Action Fund spent $800,000 and had a team of 100 staffers and volunteers on the ground in the Atlanta area, including some from the national office, over a period of several months. Readers of the liberal blog Daily Kos raised $1.6 million for Ossoff through the fundraising site ActBlue. Ossoff, whose $24 million fundraising haul was the highest for a House race ever, bused in volunteers from DC, Michigan, and New York. (Despite the fundraising and organizing momentum, he ultimately lost the race.)

By comparison, the DCCC made its first ad buy in the Pittsburgh area on Tuesday, for $224,000 over two weeks. Planned Parenthood has yet to announce any election efforts on Lamb’s behalf. And Lamb’s fundraising has stayed firmly in the realm of the terrestrial. Daily Kos readers have so far raised $51,000 for the first-time candidate—a notable boost in a normal race but a little more than one-tenth of what it raised for Ossoff in a seven-day period last winter.

The different approach to the Pennsylvania special election reflects the growth of local progressive organizing of the last eight months, as well as the increasingly cluttered electoral calendar.

“Comparing the Pennsylvania special to the GA-06 race is a little apple-and-orangey, since the Georgia special was just about the only game in town at the time,” Carolyn Fiddler, Daily Kos’ political editor, said in an email. “We’re in an election year, and we have TONS of viable Democratic candidates running in so many races. Lamb will still get plenty of attention, but circumstances prevent him from standing apart in the same way Ossoff could.”

Last year, for instance, Democrats in Harris County, Texas, one of the largest county Democratic organizations in the country, hosted a phone-bank for Ossoff. But this February their attentions are somewhere else—Texas’ Democratic primaries will take place one week before Lamb squares off against Republican state Rep. Rick Saccone, a former Abu Ghraib interrogation consultant. “If the 18th gets flipped in Pennsylvania, this will bode well for the movement sweeping across the country,” says Lillie Schechter, the Harris County Democratic chair. “We will do our best to support from Harris County, but we believe Harris County is ground zero and we have to focus our energies here.” One week after the special election, Illinois voters will settle a tight gubernatorial primary and competitive congressional primaries in Chicago and downstate. Eleven more states have primaries in May.

But Democrats just might win in Pennsylvania anyway, in part because of the foundation that was laid in the frenzied special elections of last year. A recent poll found Lamb, a Marine captain and former federal prosecutor, just 3 points behind Saccone. While Ossoff’s narrow loss helped demonstrate Democratic potential in the suburbs, the party actually overperformed the most in special elections, such as South Carolina’s 5th District, that flew largely under the radar. Lamb hasn’t come close to Ossoff’s fundraising numbers—no one else ever has—but his $500,000 is double what Saccone has raised and an impressive figure for a special election.

Many of the local grassroots activists who donated free labor for Ossoff—hours and hours of phone-banking in small meetup groups—are back in the game this time, with a year of organizing experience under their belts and a fresh head of steam. They have helped elect governors and a senator and have won a string of special election victories in state legislature races from central Oklahoma to Long Island, New York. One year later, the Resistance is a little less frantic but a lot more organized.

Laurison’s group is a good example. After Trump’s inauguration she got involved through an Indivisible-inspired “accountability action” effort called Tuesdays with Toomey, in which activists across the state would show up weekly at the district offices of the state’s junior Republican senator to protest whatever was going on in Washington that week—health care, tax cuts, the Muslim ban. (In the 18th District, locals launched a similar program, Mondays with Murphy.) But over the last year, those groups have matured into a larger statewide network capable of coordinating with like-minded organizations from California to Massachusetts to wrangle out-of-state volunteers. Pennsylvania Together is volunteer-run but increasingly professional in its work—it has incorporated as 501(c)4 and now has access to the voter rolls to track its voter contacts.

The campaigns themselves have also made it easier for outside volunteers to get involved. “Plugging into the Ossoff campaign was hard; helping Conor Lamb, whether through the campaign or grassroots, is easy,” says Aram Fischer, whose Indivisible group in San Francisco can point to a January state Senate election in Wisconsin as the most recent feather in its cap. Indivisible SF members get together every Sunday to make phone calls, send texts, or write postcards for whatever races might be coming up, and they’ve started partnering with another local group, Democracy Action SF, to work on Saturdays, too.

“A lot of the groups that are contacting us are like, ‘Oh, we’ve done texting for Doug Jones in Alabama,’ or, ‘We went canvassing in Virginia for a candidate,’ or, ‘We’ve done phone-banks,'” Laurison says. “It’s not their first ride on the pony. I think winning Alabama and Virginia gave us a lot of wind in the sails of the Resistance. They’re not making calls for the first time—they’ve seen it work.”

The Ossoff campaign was just one of the stages of the grief that defined Democratic efforts in the first year of the Trump era. “I think people spent a lot of the last time being depressed,” says Monica Burke, an Indivisible organizer in Acton, Massachusetts, who has been coordinating with Laurison. Now they’re starting to let themselves hope.