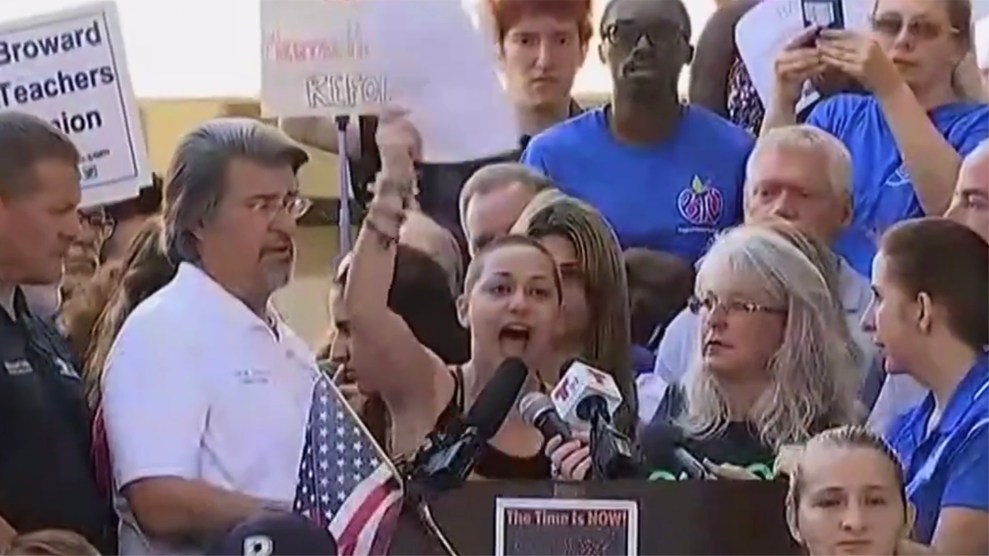 Students across the country are speaking out and demanding action against gun violence following the mass shooting Wednesday at Marjory Stoneman Douglas High School in Parkland, Florida that left 17 people dead and at least 14 others injured. In a rally Saturday at the federal courthouse in Fort Lauderdale, students from Marjory Stoneman Douglas went off: “To every politician who is taking money from the NRA: Shame on you,” said Emma Gonzalez, her speech backed by the crowd repeatedly chanting “We call BS!”

“Every single person who is up here today should be at home grieving,” Gonzales said, “but instead we are up here, standing together because if all our government and president can do is send thoughts and prayers, then it’s time for victims to be the change that we need to see.”

On Friday, about 100 students at South Broward High School, located a couple of miles from Marjory Stoneman Douglas, staged a walkout to pressure community leaders and politicians to take real action. And on social media, calls have been growing for a nationwide walkout by students to take place soon.

“I want to end gun violence,” Sara Rodriguez, 16, told the Huffington Post. “They don’t pay attention to our voice and we’re really tired of staying silent,” she said. “We are the future. We’re trying to make it but we can’t do it if they’re not listening.”

“We are angry! We want safety!” students shouted in one video posted by Florida news station CBS-12.

Since the mass shooting in Parkland, many students have expressed outrage, criticizing pundits and lawmakers who have tried to shift the debate from gun control to mental health—including President Donald Trump.

A gun has killed 17 of my fellow classmates. A gun has traumatized my friends. My entire school, traumatized from this tragedy. This could have been prevented. Please stfu tomi https://t.co/qNo03ZE3Ev

I was hiding in a closet for 2 hours. It was about guns. You weren't there, you don't know how it felt. Guns give these disgusting people the ability to kill other human beings. This IS about guns and this is about all the people who had their life abruptly ended because of guns. https://t.co/XnzhvuN1zd

Dear Donald Trump,
I’m the 16 year old girl who tweeted you and told you i didn’t want your condolences, I wanted gun control, and went viral because of it. I heard you’re coming to my community soon and I would like to express my opinions on gun control to you face to face.

Several groups, including a Twitter account launched earlier this week identifying itself as Student Walkout Against Gun Violence, have called for a national protest, with a specific date to be announced on Monday. Students at Marjory Stoneman Douglas are planning a walkout of their own on February 21st. Across the country, many students blasted the cliché talk of “thoughts and prayers” and demanded action.

we have a voice and we will be heard. nothing will ever be the same again. not douglas, not broward, not florida, not the USA.

Demands for change began literally during the attack itself on Wednesday. In a video recorded on a smartphone and later posted online, student reporter David Hogg interviewed his fellow students as they hid in a closet, their school under siege. “If you looked around this closet and saw everyone just hiding together, you would know that this shouldn’t be happening anymore, and it doesn’t deserve to be happening to anyone,” said one student. “No amount of money should make it more easily accessible to get guns.”

Student reporter David Hogg at Marjory Stoneman Douglas High School spoke with his classmates while hiding from the deadly shooting: "I wanted to be a junior NRA member … now I can't even fathom the idea of a gun in my house." https://t.co/X550dpgA88 pic.twitter.com/T7s1uEieOk