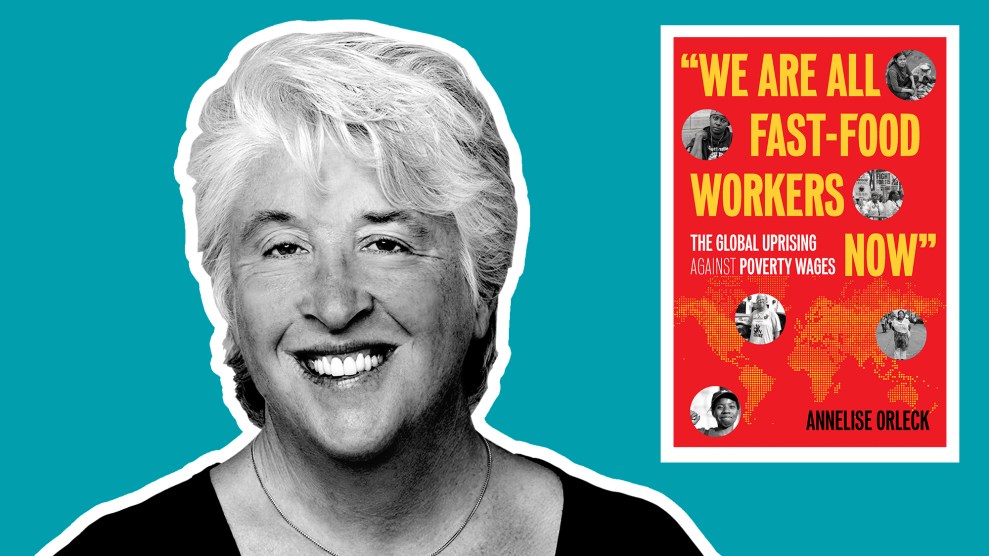 The problems workers face in the 21st century are global. Secure jobs are vanishing, income inequality is pervasive, and wage theft goes unchecked. The reaction? “A new global labor movement is awakening,” writes Annelise Orleck, a Dartmouth College history professor, the author of five books on US women’s history, politics, immigration, activism, and most recently of “We Are All Fast-Food Workers Now”: The Global Uprising Against Poverty Wages.

Orleck interviewed more than 140 small farmers, fast-food servers, retail workers, hotel housekeepers, home health care aides, airport workers, adjunct professors, and other laborers from around the world organizing for respect and a living wage. Often, the injustices they faced—whether in Bangladesh, South Africa, the Philippines, the United States, or Mexico—were strikingly similar. Orleck believes their stories of struggle and triumph help catalyze a growing movement among low-wage workers to unionize. “The global uprisings chronicled in this book, and the broad coalitions they have generated,” she writes, “have chipped and cracked the gospel of free trade.”

Mother Jones spoke with Orleck about the evolution of poverty wages, the growing global movement of workers fighting for fair wages, and why we are all fast-food workers now.

Mother Jones: One overarching theme of your book is how similar the experiences of low-wage workers are all over over the world. Did the extent of this global solidarity surprise you?

Annelise Orleck: One of my first interviews was with Bleu Rainer, a fast-food worker from Tampa. He’s now on the national board of Fight for $15. Bleu talked about one of the first times that he met workers from abroad. In the summer of 2015, after doing interviews with workers for Arcos Durados (Golden Arches)—Brazil’s McDonald’s affiliate and the second largest employer in the country—the Brazil Senate’s Human Right Commission decided that they wanted to see if the kinds of conditions and abuses that were being described to them by the workers were the same elsewhere in the world.

So they brought in workers from more than 20 countries and asked about working conditions and how they had deteriorated. They asked legislators from other countries to come in and talk about whether wages had been driven down in other industries. They asked low-wage workers in other industries to comment on the rising routinization and mechanization of work, and how these companies are turning workers into the new assembly line.

The book opens with a story that Bleu told me of being there and putting out his arm next to a worker from Japan. They saw that they had burns in exactly the same places—I call them the brands of wage slavery. Because this work is so routinized, they have to turn around the orders in 90 seconds. They have work stations where they’re constantly reaching over these vats of boiling oil. They each had situations where they weren’t paid what they were owed and had to drop out of school. And so, I think what’s happened is they realized that global corporations had to create global solidarity.

MJ: The book’s title is a quote from Keegan Shepard, a graduate student and activist with the Fight for $15 movement in Tampa Bay, Florida. Why are we all fast-food workers now?

AO: Keegan Shepard talked about the fact that, I think, 75 percent of college professors are adjuncts—not on full-time tenure track jobs. And many do not even have any kind of long term contract. They teach course to course and year to year. And he said, “They try to tell us that because of our advanced degrees we’re something special. And if we just wait, we’ll get the full-time job, and we’ll get job security, and we’ll get paid for all the work we do outside the classroom for advising and grading and preparing.” He said that’s a lie meant to keep us quiet because the truth is, “We’re all fast-food workers now.”

A quarter of these adjuncts are actually on some kind of public assistance to make ends meet, whether it’s Medicaid or food stamps or children’s health insurance programs. And so, they figured out when they paid themselves by the hour for all the work they did, they made about $8.05 an hour, which was the same as the fast-food workers were making. They said they have a lot to learn from the fast-food workers.

I realized this is the new working class solidarity, and it embraces everyone.  So it’s not an accident that the Fight for $15 movement, which started with fast-food workers, has come to embrace airport workers, school crossing guards, retail workers like the Walmart workers, and adjunct professors, right? Because as Keegan Shepard says, we’re all fast-food workers now.

MJ: Many of the workers you spoke with say this is not just a fight for fair wages, but a fight for respect. Could you talk about what that means?

AO:  It’s not accidental that the fast-food workers movement in Manila calls itself RESPECT. The Walmart organization calls themselves OUR Walmart, Organization United for Respect at Walmart. The slogan for the berry pickers in Baja, California, and up the West Coast who went on strike in 2013, ’14, and ’15, was Somos trabajadores no esclavos. “We’re workers not slaves.” For all of them there’s a desire to have recognition of their work and also protection from abuse.

I interviewed Evelin Cruz at Walmart, and she said she was moved to action by just witnessing again and again the cruelty of managers to workers on the floor. The way they would break them, abuse them, and try to embarrass them in front of customers. They engaged in something called “predatory hiring,” where they would hire people who couldn’t afford to fight back. Sister Nice, a fast-food worker organizer in Manila, talked about how in that kind of environment customers absorbed the message that you should be abusive towards these workers. When customers would hear the way managers spoke to workers, they would start addressing them in the same way. Denise Barlage at Walmart said, “We don’t need to be rich, the first step is we need to be treated like human beings.”

MJ: The fight for fair wages overlaps with many other social justice issues, including women’s rights. In what ways are these two struggles intertwined?

AO: The majority of low-wage workers worldwide are women. The average fast-food worker in the US is a 29-year-old mom with two kids. Women’s and children’s issues have really motivated this fight around the world. Part of it is an uprising against sexual assault and violence. Hotel workers and women workers in the fields have been particularly subject to sexual assault and sexual violence. The Chicago hotel workers’ union has had hands-off, pants-on campaigns where they’re calling for zero tolerance from hotel management for hotel guests, or for hotel supervisors who sexually harass the hotel workers. The Coalition of Immokalee Workers is coming to New York right now for a hunger strike and a boycott of Wendy’s to get Wendy’s to sign on to only buying tomatoes from growers who have zero tolerance for sexual assault and sexual violence.

Everywhere I went people talked about parity in wages because women workers are still paid less. They talked about an end to pregnancy discrimination and accommodations for pregnant workers in the workplace. This is from Walmart, where there’s a group called Respect the Bump. Girshriela Green is an African American mother of seven from LA, and one of the founders of Respect the Bump. They did win workplace accommodations for pregnant workers in Walmart.

Remember, Walmart and McDonald’s are the first and second-largest private employers in the world. The only ones larger are the US and Chinese militaries. Any victory from Walmart or McDonald’s ripples throughout the entire world in terms of workplace safety and accommodation. So pregnancy discrimination and accommodation for pregnant workers has been huge.

MJ: Why is this global uprising “not your grandmother’s revolution”?

AO: That was a line from Lei Catamin, a young musical theater student turned labor organizer who I interviewed in Quezon City, a suburb of Manila. He had just graduated from college where he studied musical theater and wanted to try to put his choreography to something better. The emerging movement of fast-food workers was being organized by this amazing young woman, Joanna Bernice Coronacion, who goes by Sister Nice. The Philippines love American music—American 70s R&B is blasting everywhere in Manila. And so they created the RESPECT Fast Food Workers Alliance. Their theme was the 1969 Aretha Franklin mega hit, “Respect.” Lei choreographed movements for flash mobs singing these songs, blocking traffic in Manila, to demand a living wage, and decent working conditions.

Flash mobs have become a major form of protest in many parts of the world, where there is singing and dancing and use of popular culture. Obviously, cell phones are huge. As Kalpona Akter, the leader of Bangladesh garment workers told me, even very poor workers have cellphones. Smartphones have also enabled workers to communicate with others around the world.

The final piece that’s new is this recognition that the boss isn’t necessarily the dairy farmer on the farm you work, or even the guy who owns the garment shop. The boss is the big global corporation that buys the product. And these movements are beginning to target those global corporations.

MJ: Do you believe low-wage workers around the globe are making strides in the fight for fair wages?

AO:  I think they’re making remarkable strides, and I don’t want to sound like a Pollyanna. It’s one of the reasons early in the book, I write about the many who’ve been martyred in the struggle. Not to mention the thousands who’ve been killed in workplace accidents. I think the murder of Berta Caceres in Honduras made visible something that’s been happening all over the “developing world,” which is that as these international corporations have come in to do dam projects, palm oil plantations, or are eating up rainforests, indigenous activists have paid with their lives. So this a battle that people know that they might have to die for.

One of the things that sparked the book was something Kalpona Akter said when she came to New York for a commemoration of the 100th anniversary of the Triangle Shirtwaist Factory fire. She said in Bangladesh, it’s not 2011—it’s 1911. I realized that’s true all over the world. Workers have slipped back a hundred years.

Could we end poverty in our time? To paraphrase President Lyndon Johnson, no. Are these dark times? Absolutely. Have there been real successes? Yes. They have been won by these workers, most of them women, many of them young people. And they inspire me. And they give me hope in dark times, they do.

This interview has been edited for length and clarity. Top image credit: Joel Benjamin; Beacon Press