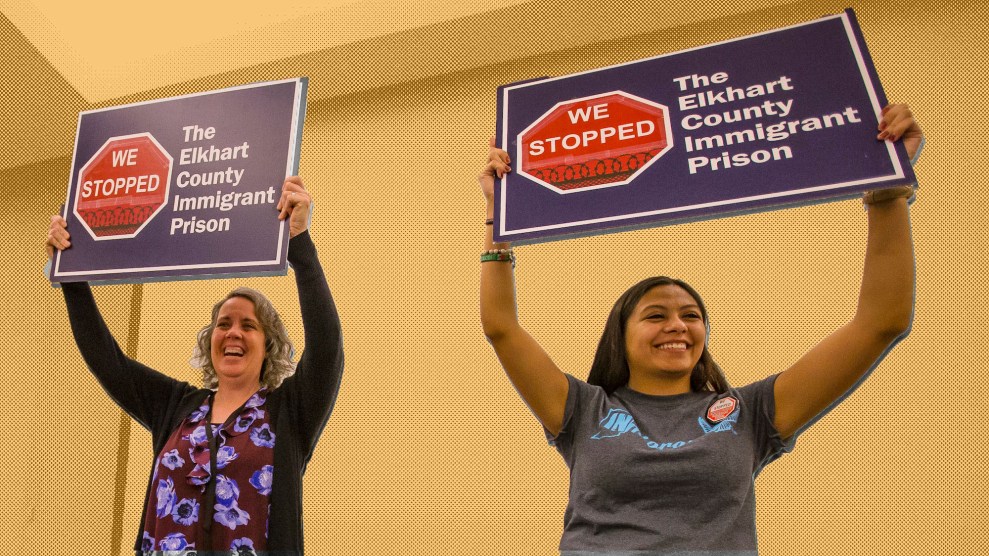 Elkhart County, Indiana, is proud of its recreational vehicles. The county—90 percent white, 41 percent factory workers, and located along the state’s northern border with Michigan—hosts RV rallies at its 4-H fairgrounds, houses an RV hall of fame, and is the heart of a region that manufactures 80 percent of the world’s RVs. It’s also a deeply conservative area, voting about 2-to-1 for Donald Trump in the 2016 election.

And yet, over the last two weeks, an improbable alliance of pro-immigrant activists, county officials, and RV manufacturing executives came together to defeat a local proposal that would have helped carry out Trump’s hardline deportation plans: a privately run $100 million immigration detention facility just outside Goshen, the county seat.

It all started in mid-November, when local activists including Richard Aguirre, director of corporate and foundation relations at Goshen College, learned that the private prison company CoreCivic (formerly Corrections Corporation of America) was eyeing a location near the landfill and county jail. Within weeks, CoreCivic filed a proposal to build an immigration detention center that could hold up to 1,240 people awaiting immigration court decisions or deportation.

ICE deportations in the first eight months of Trump’s presidency ticked up 37 percent compared to the same period in 2016.

The company was seeking to fill Immigrations and Customs Enforcement’s need for detention space to hold the increasing numbers of undocumented immigrants its agents were picking up in the Midwest. ICE interior deportations in the first eight months of Trump’s presidency had ticked up 37 percent compared to the same period in 2016, and the agency wanted beds within a 180-mile radius of four cities, including Chicago and Detroit. Elkhart County, Indiana, was in range of both cities, and CoreCivic, which gets more than a quarter of its $1.8 billion annual revenue from incarcerating ICE detainees, spotted the opportunity.

At one time—at the height of the recession, when Elkhart County’s unemployment rate hit 20 percent—the county looked like the type of depressed region often targeted for prison construction. But thanks to a strong Obama-era recovery that saw RV manufacturing once again take off, Elkhart’s unemployment rate has plummeted to about 2.5 percent. In fact, the county is facing a worker shortage so severe that it has started recruiting laid-off coal miners and Texans and Floridians displaced by hurricanes to fill an estimated 9,500 job openings.

Meanwhile, Elkhart’s turnaround has corresponded with the rise of a small but growing immigrant population, largely from Latin America. By one estimate, 9,400 undocumented people live there, and more than two-thirds of its undocumented workers are reportedly employed in factory or production jobs. “Many of the factories here employed Latinos for years [and were] not scrupulous about checking their IDs,” Aguirre says. “They have a real interest in keeping [ICE] out of Elkhart County.” (Local RV makers and their suppliers—who account for around half of all 69,500 manufacturing jobs in the county—have stated that they don’t hire undocumented workers or pay immigrants less.)

All this contributed to the economic case against the detention center, which would have created about 300 new jobs. Meanwhile, Aguirre and co-organizers Marbella Chavez and Marilyn Torres had put together a coalition to make a moral argument against a for-profit immigration jail. They researched a long history of complaints against CoreCivic, arranged for protests and prayer services, and marshaled an active 3,600-plus member Facebook group to contact local officials with specific concerns about the proposal.

“Many factories here employed Latinos for years [and were] not scrupulous about checking IDs. They have a real interest in keeping [ICE] out of Elkhart County.”

According to Mark Dobson, the president and CEO of the Economic Development Corporation of Elkhart County, a public relations firm hired by CoreCivic suggested that the EDC host a meeting “for CoreCivic to tell their story and why they fit there.” Six CoreCivic representatives, including spokesman Steve Owen and chief development officer Tony Grande, traveled to Elkhart and took questions on January 17. “It might seem indiscriminate that we landed on Elkhart County when there are other sites to consider, but you start to put in all these requirements, the geography that ICE put around it, the land, the property itself, what kind of neighborhood is it in, and then you have considerations like utilities, road infrastructure and everything else,” Grande told the Associated Press. “Once you start layering in all these requirements, you kind of come down to a smaller universe of possibilities.”

The next day, Goshen’s mayor released a letter opposing the detention center. Executives of the top three employers in the area—Thor Industries, Forest River, and Lippert Components—as well as dozens of other community leaders signed on. “If the facility gets built, it would be harder to attract new workers and residents, which we very much need,” the letter said. “CoreCivic, on the other hand, would create jobs we don’t need at wages we don’t want. Any tax dollars generated by the project wouldn’t be enough to offset the long-lasting damage such a facility would do to our county—both in terms of perception and in terms of creating an unwanted unwelcoming reputation.”

The letter was the tipping point for CoreCivic. Within days, other local officials had made clear their opposition to the detention center, and on January 22, less than three weeks before its proposal was set to be considered by the county commissioners, the company withdrew its plan. “Throughout this process, we have been assessing whether the Elkhart community would be a good fit for this project, just as local officials have been assessing the potential impact to the community,” Owen told the South Bend Tribune. “Our assessment has led us to this decision.”

“This victory should give hope to other communities that they also can defeat a private prison when good people band together.”

“We made it safer for the GOP-dominated business and industry leaders to go on record in opposition despite fears from local Trump supporters,” Aguirre said. His coalition plans to share lessons from its activism with other communities and refocus on other immigration advocacy. “This victory should give hope to other communities that they also can defeat a private prison when good people band together and put together an effective campaign.”

ICE’s request for more immigration detention in the Midwest still stands. CoreCivic, for its part, likely isn’t sweating the outcome in Elkhart. Two days after the company withdrew its proposal, it announced a separate deal with the Kansas Department of Corrections for a 2,432-bed, custom-designed state prison—worth at least $350 million over a 20-year lease.