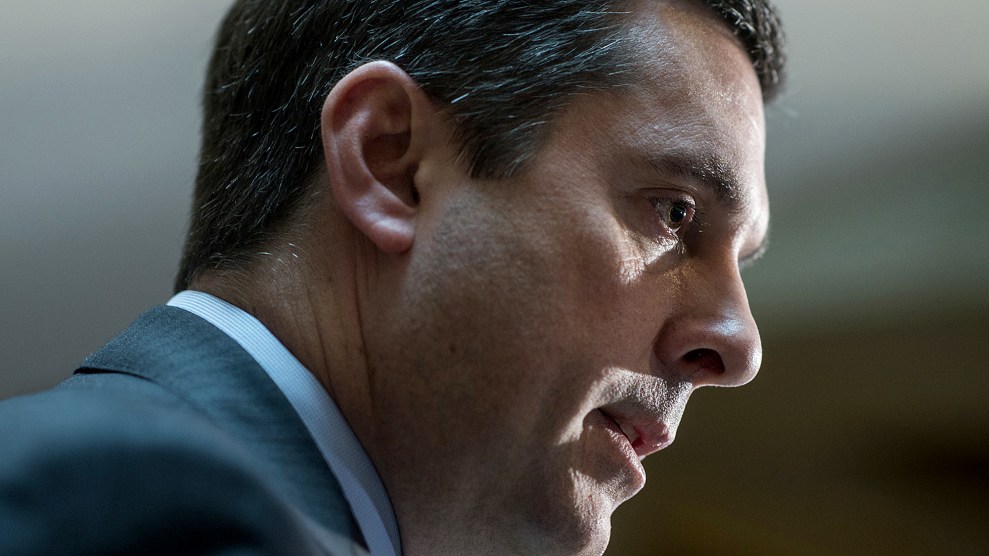 Rep. Devin Nunes (R-Calif.) represents one of the safest Republican congressional districts in California: In seven of his eight elections, he has captured more than two-thirds of the vote without breaking a sweat. Yet for the first time since he was first sent to the House in 2002, Nunes is at risk in his home district—and it’s his own fault.

“If you had asked me six months ago if it was possible to get rid of him, I would have said, ‘No,’” Tom Chamberlain of the Visalia Democratic Club recently told Mother Jones. “But now—so much has happened. People are getting fired up.”

Even before the much-hyped Nunes memo landed with a thud last week, the congressman was getting a reputation for using his position as chairman of the House Intelligence Committee to run defense for President Donald Trump, often clumsily. Nunes’s hometown newspaper, the Fresno Bee, dubbed him “Trump’s stooge.” One associate called him “an overeager goofball” and Sen. Lindsay Graham (R-S.C.) compared him to the bumbling Inspector Clouseau.

Nunes’s emergence as the public face of Republican efforts to undermine Special Counsel Robert Mueller’s investigation has energized a groundswell of Democratic opposition in his district. A recent Public Policy Polling survey found that Nunes was only five points ahead of “a generic Democratic opponent” and was losing ground with independents. With the release of the memo, money has started to pour into the campaign of his leading challenger, Andrew Janz, a prosecutor with the Fresno County District Attorney’s Office. The day that Nunes released the memo, Janz raised more than $100,000. A brutal anti-Nunes campaign ad Janz released last Thursday has more than 600,000 views on Twitter.

With your help I’m going to beat Devin Nunes in November. Unless Mueller gets to him first. #removenunes pic.twitter.com/RL1h2S8Wxf

In the past, says Tom Holyoke, a professor of political science at Fresno State University, “The Democrats usually manage to put somebody up, but more of the sacrificial lamb variety.” But Janz, a moderate Democrat with crossover appeal, “actually could potentially give Nunes a run for his money.”

“It’s been a very long time since we actually had a serious candidate against Mr. Nunes,” says Joseph Altschule, the former chair of the Tulare County Democratic Central Committee. “Usually it’s a place holder, somebody who steps up at the last minute. No organization, no money, no national backing—but Andrew’s got all of that.”

Ousting Nunes may seem an unlikely prospect. His district, a section of the southeast San Joaquin Valley dominated by expanses of farmland, has an 11-point GOP registration advantage and is rated “Safe Republican” by several polling outfits. Its voters gave Trump a nearly 10-point margin over Clinton in 2016, and Nunes himself was reelected with 68 percent of the vote. Republicans in the area see him as strong on the issues they care about, notably water and public safety.

“A lot of the Republicans in Nunes’ district are pretty conservative and a lot are very pro-Trump,” Holyoke says. They’ll either shrug off the memo, or they will see it “as Devin doing his constitutionally charged job of leading an oversight panel that is exposing corruption, abuse, and apparently secret cabals within the FBI that are trying to undermine Donald Trump.”

Indeed, Fred Vanderhoof, the chair of the Fresno County Republican Party Central Committee, is sticking by Nunes’ interpretation of the memo. “The shocking thing is that we got what looks like collusion—but it’s between the DNC, the Hillary Clinton campaign, the FBI and the DOJ, colluding to support one candidate, Hillary Clinton, over Trump,” he says. “As we unravel this whole problem, we’ll probably see some people go to jail.” He’s not referring to members of the Trump administration.

Yet there are signs that Nunes’s advantage is weakening. He hasn’t held a town hall meeting since 2010, instead communicating with his constituents by calling into friendly radio stations. Though Nunes has been an advocate for big agriculture and its water needs, he hasn’t delivered many tangible results. “He’s been putting out bills, they pass the House and go nowhere in the Senate,” Holyoke says. (In 2017, none of the bills he authored passed.) His district’s demographics increasingly favor Democrats, too: Nearly 45 percent of its residents are Hispanic, and its white population is getting older.

And Nunes’s awkward behavior in Washington—like telling Fox & Friends that indicted former Trump campaign aide George Papadopoulos had never met Trump despite a photo of them at the same table—may contribute to the perception that he’s distracted. “Focusing on the national issues does help Janz,” Holyoke says. “He can paint Nunes as an out-of-touch politician, one who is more interested in raising his own profile and more interested in defending an ethically questionable president than representing his constituents.”

Of course, to really make the November election competitive, says Holyoke, Democrats will have to galvanize a local movement, carry Janz’s message to undecided voters, and raise a lot more money. Though Janz’s campaign has raked in more than $340,000 since the Nunes memo dropped, it’s nothing compared to the $3.8 million Nunes has socked away.

Republicans “are going to be working hard” to reelect Nunes, Vanderhoof says. But, for once, “We’re not taking his race for granted.”