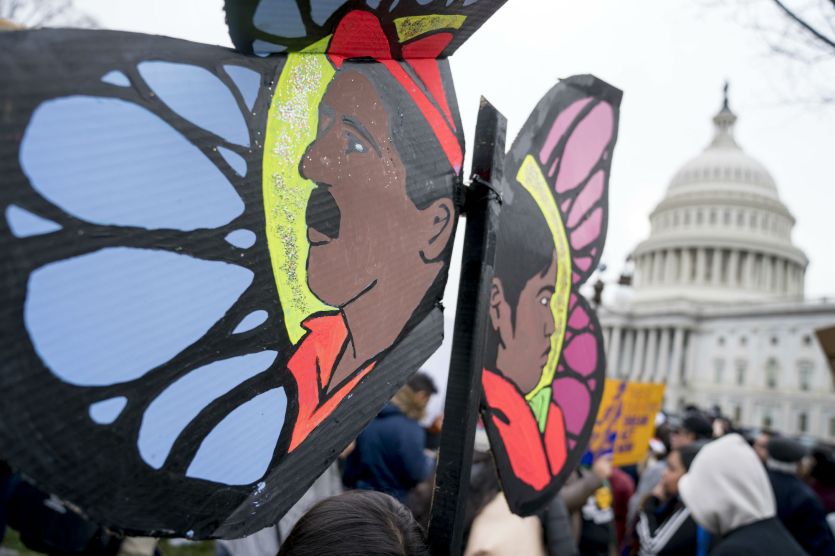 The same day the Senate rejected three measures that could have given young, undocumented immigrants a pathway to citizenship, Eduardo Samaniego started a trek on foot from New York to Washington, DC.

Frustrated by inaction in Congress, Samaniego and 10 other Dreamer activists are walking 250 miles over the course of 15 days to call on legislators to pass a bill that would protect young immigrants who came to the United States illegally when they were minors.

A handful of the marchers, affiliated with different immigrant-rights groups, met earlier this year in DC, where they were advocating a DREAM Act they believed would pass. Instead, the government shut down.

“We realized there was going to be a longer fight than we thought,” the 25-year-old Samaniego told Mother Jones from a church in Newark, New Jersey, where the marchers spent their first night on the road.

“We realized there was going to be a longer fight than we thought.”

The march, called the Walk to Stay Home, kicked off Thursday. The activists plan to reach the nation’s capital on March 1, days before the March 5 expiration date of the Obama-era Deferred Action for Childhood Arrivals program, which now shields about 700,000 Dreamers from deportation.

The walk is inspired by a 2010 march, during which four demonstrators traveled from Miami to DC to pressure Congress to pass the DREAM Act. The 11 activists represent the 11 million immigrants living in the United States without documentation, and they started their journey by taking a ferry past the Statue of Liberty.

Most of the marchers are DACA recipients. Samaniego, who arrived in Georgia as a 16-year-old from rural Mexico in 2009 and overstayed his tourist visa, just missed the cutoff date to qualify for DACA. (DACA recipients must have been 15 or younger when they came to the United States.)

The goal of getting a good education lured Samaniego to the United States. After a string of disappointments—including a policy that forbade students living illegally in the country from applying to the University of Georgia, his top choice—and two years of working two jobs to save up for college tuition, he got a full-ride scholarship for undocumented students to Hampshire College. He says he had taken a year off from school to deal with an injury but then decided he had to fight the growing anti-immigrant sentiment under the Trump administration.

Although Texas Republican John Cornyn told the New York Times he didn’t see the immigration debate resurfacing in the Senate anytime soon, Samaniego says his trek is a way for him to take his fate into his own hands.

“I go to bed fearing that a DREAM Act will be passed,” Samaniego says, “and I won’t be included.”