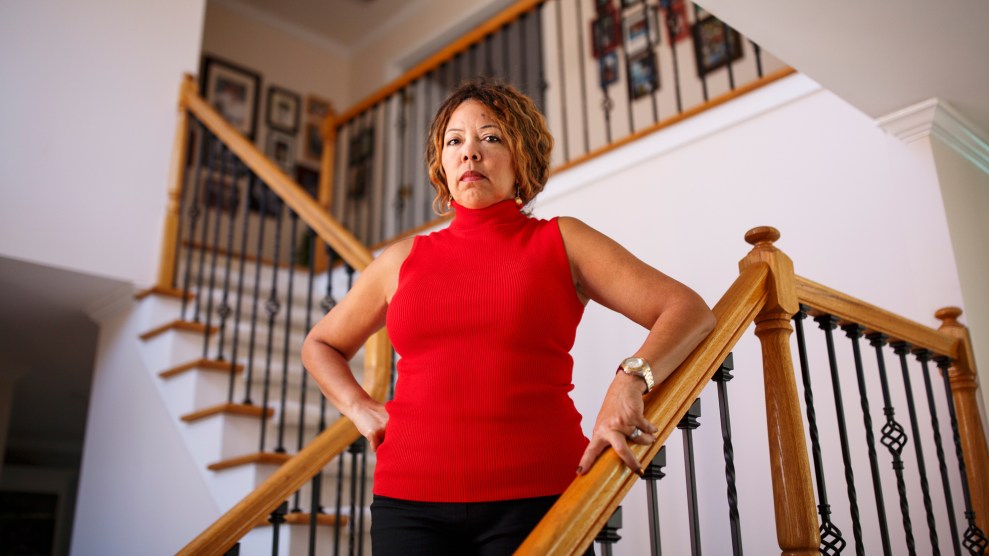 On a Friday morning in December, a freak storm has sent snow billowing down the wide streets of Marietta, Georgia. But despite icy roads and an accident-related traffic jam near her house, Lucy McBath comes walking through the ’50s-style double doors of the Marietta Diner, a smile spread across her face.

As she settles into a booth beneath Christmas decorations hanging from the ceiling, it’s clear no storm will stop her. “I have 100 percent security in the fact that God will lead me where I need to be,” she tells me. “I will continue to go through any door that he opens for me because that will allow me to make the best and the most important impact for serving people.”

Activism, Lucy McBath says, “is in my DNA.”

The past five years of McBath’s life have been a series of doors opened by a terrible tragedy. The day after Thanksgiving in 2012, her 17-year-old son was shot while sitting in a car with a group of friends at a gas station following a dispute with another driver over the volume of the teens’ music. The gunman, a 45-year-old white man named Michael Dunn, fired 10 shots at the teenagers. Jordan Davis was hit three times. His best friend tried to pull him away from the gunfire, but Jordan’s body just fell into his lap. He died at the scene.

The teens were black, and the shooting happened nine months after another black teen, Trayvon Martin, was gunned down by neighborhood vigilante George Zimmerman, causing national outrage. The week after Jordan’s death, McBath’s ex-husband got a text from Trayvon’s father: “I just want to welcome you to a club that none of us want to be in.”

A deeply religious woman, McBath spent the next year seeking justice for the son she had named for a biblical crossing of the Jordan River. But even before Dunn was sentenced to life without parole, she had started to feel adrift, no longer anticipating the joy she once felt traveling the world as a Delta flight attendant for 30 years. Then her phone rang. On the other end was a woman named Shannon Watts, calling from Indiana. Three weeks after Jordan had been killed, 20 children and six adults had been massacred at Sandy Hook Elementary in Connecticut. The next day Watts had launched Moms Demand Action for Gun Sense in America, a grassroots group pushing for gun safety legislation. Now she was calling with one hell of an ask: Would McBath be willing to help her end gun violence?

McBath has been critical in getting the gun control movement to take seriously the concerns of the black communities most affected by gun violence.

McBath remembers being overcome by a sense of certainty. “The work was calling me,” she says. “I wanted to be speaking about violence prevention. I wanted to be challenging our legislators and our civil leaders.”

Moms Demand Action would eventually come under the umbrella of Everytown for Gun Safety, the nonprofit bankrolled by Michael Bloomberg, and through its work McBath would find a mission and a national profile. She has testified in Congress and spoken before five state legislatures. She stood behind President Barack Obama during a White House address on gun violence. She was a surrogate for the Clinton campaign and spoke during prime time at the Democratic National Convention. But now she’s taking on her biggest challenge yet: running for a seat in Georgia’s House of Representatives. To say the odds are stacked against her is an understatement. She’s a black woman made famous by a white man shooting her child. She has never run for office and is doing so on a gun control platform in a traditionally conservative district.

Heading to the Statehouse might seem a heavy lift for a political novice, but McBath isn’t exactly that. She attended civil rights marches as a child with her father, then the president of the Illinois branch of the NAACP. On her phone she keeps a grainy photo of him sitting in the White House with Lyndon Johnson as the president signed the Civil Rights Act of 1964. McBath graduated from Virginia State University in 1982 with a degree in political science and interned for Douglas Wilder, who would become the state’s first black governor. Activism, McBath says, “is in my DNA.”

Early on, Watts was struck by McBath’s willingness to share her grief so publicly—and moved by the way McBath spoke, a call-and-response method that makes people feel personally invested in her message. “There’s just something about Lucy that transcends a normal human interaction,” Watts says. Cobb County Democratic Committee Chairman Michael Owens recounts a town hall where McBath moved people to tears. She has, he says, “the ability to pull people into [her] story.”

McBath has been critical in getting the gun control movement to look beyond mass shootings and high-profile white victims and take seriously the concerns of the black communities most affected by everyday gun violence. And she’s become particularly important in helping reach white evangelical constituencies traditionally hostile to gun control. In the 2015 documentary The Armor of Light, she is magnetic, at turns heartbroken and crusading. In one particularly powerful scene, tears stream down her face as she pleads with evangelical minister Rob Schenck, a well-known anti-abortion activist but also a believer in stricter gun control, to help spread their shared message to the Christian community: “I know it’s going to be hard for you, and I know that there may be people who don’t follow you anymore because of the stand that you take, but isn’t it far better to stand before God and know that you’ve done everything in your power to do what you know in your heart is right?”

McBath was on the road promoting the film when LaDavia Drane, the director of African American outreach for the Clinton campaign, called to ask if she would meet with the candidate, along with a handful of other black mothers who had lost their children to gun violence or police abuse. McBath couldn’t quite wrap her head around what Hillary Clinton might want from her. “How did you get my number?” she recalls thinking. “Is this a joke?”

If the gathering was a strategic move by the Clinton campaign to align itself with black communities under siege, it was also an opportunity for these black women, dubbed the “Mothers of the Movement,” to grow their political clout. Soon they were everywhere, from center stage at the Democratic convention to side by side with Beyoncé at MTV’s Video Music Awards. The experience of bonding in the national spotlight with the “mother-sisters,” as they call themselves, prompted McBath to run. “Serving my community, saving people’s lives—that’s my life,” McBath says. “I never looked back.”

Emily’s List strategic communications director Vanessa Cardenas notes that McBath is part of a surge of women who have become interested in running for office since Donald Trump was elected. In 2016, 920 women participated in the group’s trainings; since Trump won, some 2,400 have. More than 300 of them are women of color, including McBath, according to Cardenas. “Lucy really just embodies [women] of color that are stepping up,” she says.

McBath, though, stands out in that she’s also part of a wave of first-time candidates directly affected by gun violence. In November, Chris Hurst, the boyfriend of a journalist who was shot and killed on camera in 2015, won a seat in Virginia’s House of Delegates. Moms Demand Action trained 13 candidates last year; nine won. The group is rolling out a program that verifies candidates as having “gun sense.” McBath is one of its highest-profile test cases.

“Lucy really just embodies [women] of color that are stepping up.”

She faces an incumbent, Republican Sam Teasley, and has the distinct challenge of boasting a national platform that could overshadow her local bona fides. The district, spanning Marietta and unincorporated parts of Cobb County, has historically trended to the right. And it’s home to Kennesaw, where a 1982 law—not enforced but still on the books—requires the head of each household to own at least one firearm.

The county, though, is changing. While still mostly white, it is expected to be a majority-minority area by 2021. Trump won Georgia but lost Cobb County by 2 percentage points. “People have a perception of what Cobb County is,” says Owens. “What we’re now having to do is force our political leadership to look more like the actual demographics that we have.”

McBath is optimistic. Convincing people to vote for her, she says, is similar to “making an ask of evangelical white gun owners.” She’s confident her experience as a single mother will appeal to families who want to protect their children, particularly by keeping guns off school grounds. (Last year, Georgia started allowing concealed weapons on college campuses.)

Back at the diner, I can see it. McBath is authentic but has mastered the subtle mannerisms of a politician—the way she leans in to make a point, her tendency to nod and smile at the end of her sentences. “All of the preparations and the battles that I’m having to fight now to save people’s lives, to take this work to a whole other level, is tough.” But, she adds, “what else could you do to hurt me? Bring it on.”