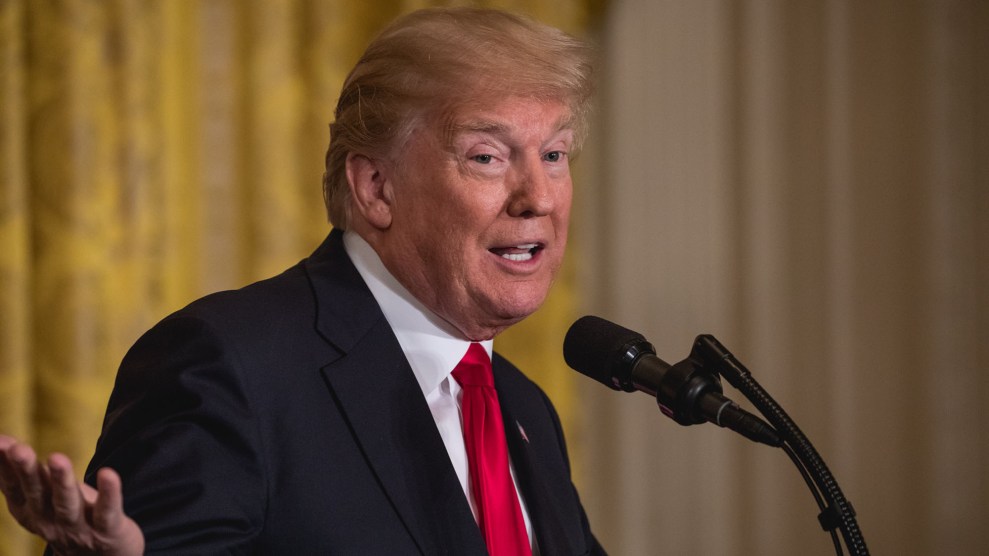 On Friday morning, President Donald Trump denied calling Haiti a “shithole” country, tweeting that “I have a wonderful relationship with Haitians.” Trump did not explain how that fits with his administration’s decision to end temporary legal status for nearly 60,000 Haitian immigrants.

Never said anything derogatory about Haitians other than Haiti is, obviously, a very poor and troubled country. Never said “take them out.” Made up by Dems. I have a wonderful relationship with Haitians. Probably should record future meetings – unfortunately, no trust!

In November, the Trump administration announced it was ending the Temporary Protected Status (TPS) that has allowed 59,000 Haitians to legally work in the United States since 2010 when an earthquake killed an estimated 300,000 people, leaving millions homeless. Haitians with TPS will now be subject to possible deportation if they don’t leave the United States by July 2019 or find another path to legal residency.

As Mother Jones has reported:

Haitians’ TPS had been continually renewed since then, but in May, then-DHS head and now Trump chief of staff John Kelly announced that their status, which was coming up again for renewal in July, would only be renewed for six months and reevaluated in November…

Immigration activists and even members of Congress have cautioned the Trump administration against sending Haitian immigrants back. Since the earthquake, Haiti has been dealing with an ongoing cholera epidemic, chronic poverty, and underemployment, exacerbated by the ongoing recovery from Hurricane Matthew which killed hundreds in 2016.

As he campaigned for president in 2016, Trump told Haitian-Americans in Miami that they were “amazing people” who add “so much to our country.” Trump told the group that “together we will build a relationship based on mutual respect,” adding that they had a lot of “commonly shared values—maybe full shared values.”

In stark contrast to his administration’s decision to end protected status for Haiti, Trump said “the truth is Haiti is still suffering very badly, maybe as badly.”