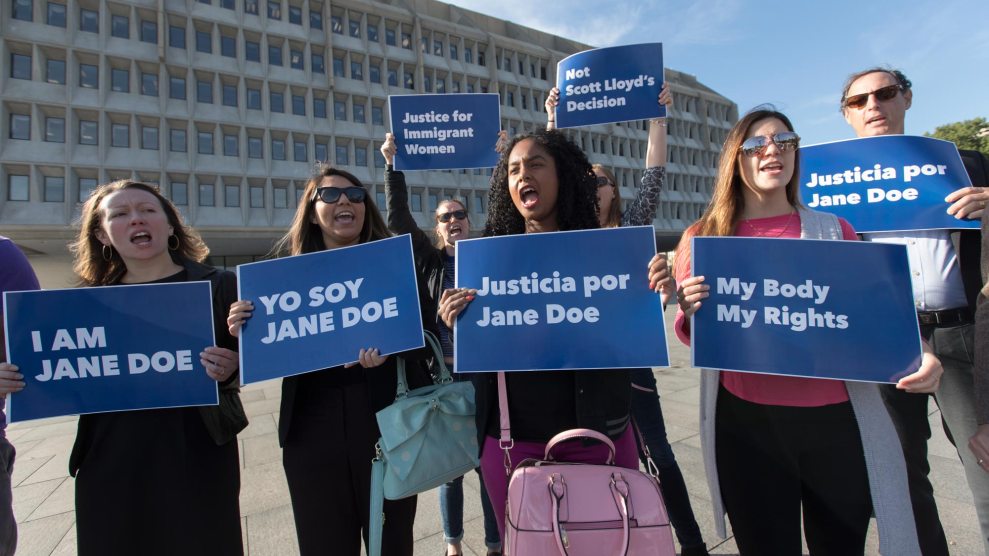 Since early this fall, the Trump administration has repeatedly sought to prevent migrant teens in its custody from obtaining abortions, under a new policy issued by the Office of Refugee and Resettlement (ORR). Three different pregnant teens—Jane Doe, Jane Roe, and Jane Poe (all pseudonyms)—have sued over this policy, and all three have won eventual permission to terminate their pregnancies.

“If the Court does not intervene, Ms. Moe will be forced to carry to term against her will.”

Moe is 17 years old and being held in a private shelter that contracts with ORR to house and care for unaccompanied migrant teens. According to the ACLU’s request to the court, Moe, who is already in the second trimester of her pregnancy, first requested an abortion two weeks ago. She has yet to receive one, but has been required to visit an anti-abortion crisis pregnancy center to discuss her pregnancy. ORR also wants her parents to be notified of her pregnancy and her decision to seek an abortion, while Moe has said she fears retaliation if they found out. Moe has secured private funds for her abortion, and the shelter where she is housed is prepared to transport her to a provider, but ORR is withholding the permission for them to move forward.

In its court filing, the ACLU warns that without a restraining order allowing Moe to get an abortion, she “will be pushed further into her pregnancy, increasing the risks associated with the abortion procedure, and, if the Court does not intervene, Ms. Moe will be forced to carry to term against her will.”

The ACLU also notes that this particular court has dealt with this question multiple times in the last few months—”this Court is now extremely familiar with the issues presented,” they write. They ask the judge to skip oral arguments and immediately issue an order that would permit Moe to quickly move forward with the procedure. “Time is of the essence,” write the teen’s lawyers. “Any further delay increases the risks to her health as well as the risk that she will ultimately be stripped of her constitutional right to abortion entirely.”

Late last year, Trump’s justice department requested the Supreme Court consider the case of Jane Doe—the first migrant teen who sued the administration for abortion access—after a federal appeals court issued a ruling allowing her abortion. In addition to defending the ORR’s policy impeding abortions, the department is asking the high court to sanction the ACLU’s lawyers for allegedly lying to the government about the timing of Doe’s abortion after she received permission to move ahead with the procedure. A number of legal experts view the DOJ’s filing as a sign of inappropriate politicization of the government’s legal work. The high court is scheduled to discuss taking the case later this week in conference.