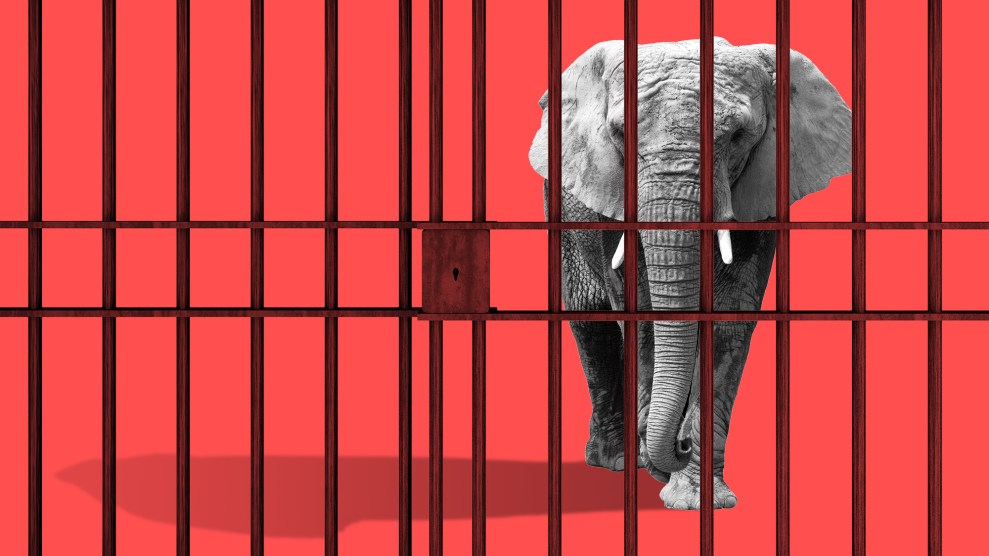 Four years ago this week, Rep. Michael Grimm (R-N.Y.) threatened to throw a reporter off a balcony. Grimm, a former FBI agent from Staten Island, took offense at being asked by NY1 reporter Michael Scotto about criminal charges facing one of his campaign fundraisers. “You ever do that to me again I’ll throw you off this fucking balcony,” Grimm said, adding, “I’ll break you in half, like a boy.”

He didn’t, but Scotto’s line of questioning proved prescient. Grimm pleaded guilty to tax fraud later that year and served eight months in federal prison. Now that he’s out—and running for his old job again—Grimm has come up with a uniquely Trump-era excuse for his legal woes: The Deep State did it.

On Monday, Andrew McCabe resigned as deputy director of the FBI following intense criticism from the president and conservative media over the bureau’s Hillary Clinton email investigation and the Russia probe. Per the New York Daily News, Grimm weighed in on McCabe’s departure by seeking to connect the Trump administration’s war on the FBI to his own 2014 prosecution:

He blamed them for everything “from sabotaging President Trump with the Russiagate conspiracy theory, to letting Hillary Clinton off the hook in 2016, and as far back as leveraging a civil business violation to drive me out of office in 2014.”

Grimm is not alone in hoping to use Trump-era conservative paranoia about federal investigations to elide his past transgressions. In West Virginia, another ex-con running in a Republican primary, former Massey Energy CEO Don Blankenship, is doing something similar in his bid to unseat Democratic Sen. Joe Manchin. Blankenship left federal prison last May after serving a one-year sentence for conspiring to commit mine safety violations in the run-up to the nation’s deadliest mine disaster in decades. Since getting out of prison, though, Blankenship has saturated the state’s airwaves with ads presenting his own theory of the case—that he was railroaded by the Obama administration, which wanted to cover up the federal Mine Safety and Health Administration’s complicity in the Upper Big Branch mine explosion. (Blankenship contends that MSHA’s safety regulations actually made the mine more dangerous.)

Blankenship’s argument doesn’t pass muster—state and federal investigations both found a persistent and calculating disregard for workplace safety at his mine that created the conditions that led to the disaster. But in a state where national Democratic figures are politically toxic, he’s hoping that the Trump-style frame of a good conservative businessman persecuted by the liberal elites will carry him through.

Meanwhile in Arizona, former Maricopa County sheriff Joe Arpaio has thrown his hat into the GOP primary to replace retiring Republican Sen. Jeff Flake. Arpaio was convicted of criminal contempt in 2017 for refusing to comply with a federal court order to stop racially profiling Hispanics, but he was pardoned by Trump before serving any prison time. After the pardon, Arpaio thanked Trump for recognizing that he had been victimized by “a political witch hunt by holdovers in the Obama justice department.” (The injunction Arpaio refused to comply with was in fact issued by a George W. Bush appointee.)

Their individual circumstances differ, but Blankenship, Arpaio, and Grimm are all making the same wager: They’re shorting the integrity of government institutions, because they’re betting that the president’s followers will, too.