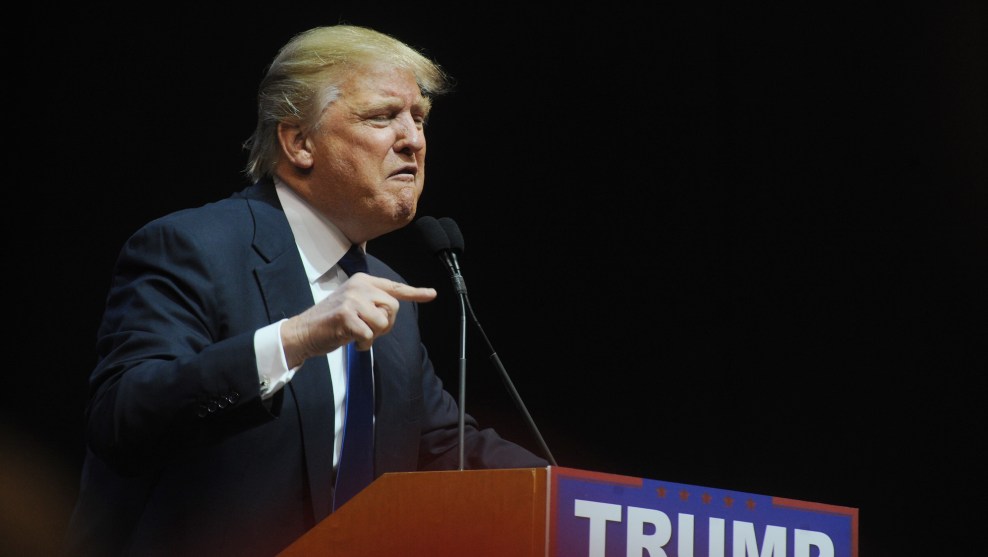 With the recent developments in the Tale of the Mad King—the revelations that President Donald Trump tried to fire special counsel Robert Mueller last year, that Trump was enraged that former FBI director James Comey was allowed to fly back to Washington on an FBI plane after he canned him, that Trump told FBI deputy director Andrew McCabe he should ask his wife what it was like to be a loser, that Trump has supported the release of a dodgy classified memo drawn up by Republican aides that supposedly questions a super-secret surveillance order approved by the Justice Department—there has been much speculation that Trump’s master plan is to remove any institutional obstacle that might impede his ability to give Mueller the boot. That may well be true. Mueller, with his 16 prosecutors highly experienced in money-laundering, organized-crime, white-collar crime, and cybercrime prosecutions, has demonstrated a seriousness of purpose that ought to scare any sentient person on the special counsel’s radar screen. But there could be a more basic motive propelling Trump: his obsession for revenge.

I wrote about this prior to the election (for all the good it did), noting that one constant in Trump’s life was his profound desire to get even and smite any of his detractors. Often he follows this impulse when a reasonable person might conclude it was self-defeating. As I noted back then:

Revenge—it’s a big part of Trump’s life. Following the first presidential debate, he spent days of valuable campaign time (and hours of valuable sleep time) slamming Alicia Machado, the former Miss Universe. At other times during this contest, he could not let go of his feud with Rosie O’Donnell. He tried to smear Judge Gonzalo Curiel, the American-born federal judge hearing a fraud case against Trump University, as a “Mexican” unqualified to preside over this litigation. For days, he derided Khizr and Ghazala Khan, the parents of an Army captain killed in Iraq, after Khizr criticized him during a speech at the Democratic convention. He launched misogynistic attacks against Carly Fiorina and Megyn Kelly. Rather than attempt to unify his party after a divisive primary fight, he threatened to finance future campaigns against GOP rivals, most notably Ohio Gov. John Kasich. He encouraged violence against protesters at his rallies. And there were the mean and nasty nicknames: Lyin’ Ted, Little Marco.

Trump seems to live to settle grudges. For him, retaliation is a religion. But don’t take my word for it. Take his. In speeches and public talks Trump gave in the years before he ran for president, he hailed retribution as an essential element of a success. One example:

In 2011, he addressed the National Achievers Congress in Sydney, Australia, to explain how he had achieved his success. He noted there were a couple of lessons not taught in business school that successful people must know. At the top of the list was this piece of advice: “Get even with people. If they screw you, screw them back 10 times as hard. I really believe it.”

In that article, I cited multiple instances of Trump expressing this sentiment. In an 2007 speech, he shared his first rule of business:

It’s called “Get Even.” Get even. This isn’t your typical business speech. Get even. What this is a real business speech. You know in all fairness to Wharton, I love ’em, but they teach you some stuff that’s a lot of bullshit. When you’re in business, you get even with people that screw you. And you screw them 15 times harder. And the reason is, the reason is, the reason is, not only, not only, because of the person that you’re after, but other people watch what’s happening. Other people see you or see you or see and they see how you react.

These are not the sentences of a well-balanced, gracious human being who can rationally assess costs and benefits. He has, of course, tweeted this notion:

“Always get even. When you are in business, you need to get even with people who screw you.” – Think Big

Others have noted Trump’s love affair with payback, including former House Speaker New Gingrich. In an interview before the election, he pointed out that Trump often loses his cool in response to “anything which attacks his own sense of integrity or his own sense of respectability, and he reacts very intensely, almost uncontrollably, to those kinds of situations.” He opined that “there’s a big Trump and a little Trump,” And, too frequently, Little Trump is in control—or out of control. (Richard Branson wrote of an unnerving revenge-drenched encounter with Trump several years before the 2016 campaign.)

This is a serious matter. With President Little Trump in charge, norms and the rule of law are at risk. During the transition, Trump noted in several tweets that he believed the US intelligence community was out to get him. Since then, he has waged war on the FBI and the Justice Department—and ignored the intelligence community’s assessment that Vladimir Putin mounted a covert information warfare campaign to subvert the 2016 election to help elect Trump.

Now Trump is out to get them—whoever the them is in his feverish paranoia. He settled the score with Comey. He nailed McCabe, who was forced out this week. Now, it seems, Trump’s new target is Rod Rosenstein, the number two in the Justice Department, who Trump actually appointed. (With Attorney General Jeff Sessions recused from overseeing the Mueller investigation, that responsibility sits on Rosenstein’s desk.) Trump is like Michael Corleone bumping off his self-perceived enemies one at a time.

The flip-side of Trump’s revenge-obsession is almost as bad: Trump has a profound yearning for acceptance, recognition, and compliments. How many times has Trump said that Putin is a good guy because he said something positive about Trump? Trump’s highly personalized—you might say, narcissistic—view of the world can undermine national security. As Trump has sought revenge against his foes in the FBI and the Justice Department, he has this week eased up on sanctions applied on Putin’s regime for its meddling in the election. In short, for Trump, McCabe is a problem, Putin is just fine.

The fundamental and inescapable reality is that a man driven by revenge is in charge of the federal government (and its nuclear arsenal). He has already demonstrated that this passion of his is a threat to the traditions and institutions of the Republic. As long as he remains at the helm, the state of the union will be unstable.