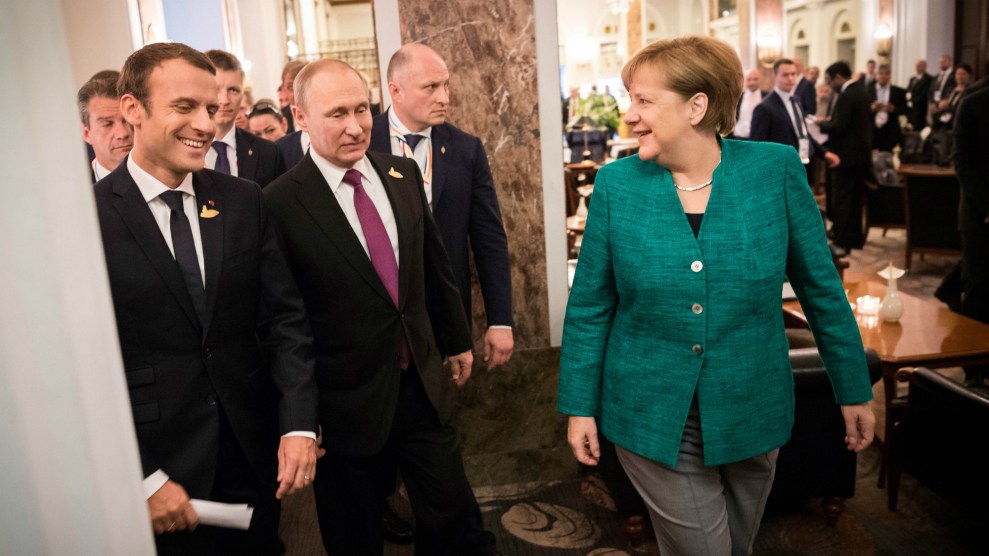 The 2016 US election wasn’t an anomaly. Russia targeted American democracy, but has also has ramped up cyberattacks and influence campaigns in recent years in Europe as well, making the continent a testing ground for Kremlin efforts to sway democratic elections—and for how democracies can fight back. On Wednesday, Democrats from the Senate Foreign Relations Committee working under Sen. Ben Cardin (D-Md.), the panel’s top Democrat, released a report that details what it calls “malign influence campaigns” by Russia in 19 European states in recent years. The report documents acts of war in Ukraine, a coup plot in Montenegro, hacked emails and social media bots, and it makes 10 sets of recommendations on how the US can stop similar attacks in the future. While the report’s top recommendation is also an admission of a major hurdle—”Assert Presidential Leadership and Launch a National Response”—the authors offer several lessons that US lawmakers can actually act on, even if the president continues to call Russian interference a hoax.

Call out or confront Russia on its attacks

The report lauds British Prime Minister Theresa May for publicly denouncing Russian efforts to influence the country’s 2016 Brexit vote, as well as others. ‘‘We know what you are doing,” May warned Russian President Vladimir Putin in a November 2017 speech. “And you will not succeed.” May also announced that an intelligence and security parliamentary committee would be convened to investigate Russian meddling in the country. The authors suggest May’s actions raised British awareness of the problem and provided a strong warning against future adventurism in British affairs.

In May, German Chancellor Angela Merkel also confronted Putin in a reportedly tense meeting. Worried about Kremlin efforts to release documents hacked from the lower house of the Bundestag and her Christian Democratic Union party, she bluntly cautioned Putin that Germany would take ‘‘decisive measures” against interference in the German election through cyberattacks or disinformation. The report credits Merkel’s warning with successfully preventing Russia from aggressive interference in the country’s election last fall.

Crack down on Russia-based crime

Spain has worked aggressively to prosecute Russia-based organized crime groups that use the country for money laundering and other crimes, the report notes. And Spanish money laundering operations have specifically targeted officials close to Putin. In just one example, Spanish police gathered a case against Alexander Torshin—a Russian banker who met with Donald Trump Jr. last year in what was reportedly part of Russian outreach to Trump campaign officials—for alleged ties to a Russian organized crime and money-laundering ring. (Torshin, though, narrowly averted arrest in 2013, perhaps due to a tip off, when he failed to board a flight to Mallorca where police planned to arrest him.) Spain’s investigation appears to have helped stop a planned meeting between the Torshin and President Trump early last year, as White House aides scrubbed Torshin from an event guest list at the last minute after learning of his alleged ties. The report also suggests Spain’s efforts helped squeeze financing otherwise used to support Russian influence efforts.

Latvia, Lithuania, and Estonia, all former Soviet states with sizable Russian-speaking minorities, have been aggressively targeted by what the report calls “supercharged” Kremlin “disinformation operations” for years. Citizens in the three countries have joined an informal network of citizens who work to “expose the bullshit,” as the group’s Lithuanian founder put it, of Kremlin-linked internet trolls by countering Russian messaging online. These communities have been successful not just in cyberspace, but also in person by organizing counter-demonstrations at pro-Kremlin rallies in their respective countries. Their governments also employ state-level efforts to inform citizens of the malicious activities of Russia’s security services.

Get tough on spies

Estonia’s intelligence service, which has a reputation for success, practices a ‘‘zero tolerance’’ approach to illegal activities by Russian intelligence operatives within its country’s borders. Where many counterintelligence agencies downplay the arrest of intelligence agents or trade them back to Russia, the Estonians prosecute them to the maximum extent of the law. The agency also works to expose Russian skullduggery, publishing an annual report that reveals major counterintelligences cases and names organizations and people suspected of working with Russian intelligence services. “Exposing and publicizing the nature of the threat of Russian malign influence activities can be an action-forcing event that not only boosts public awareness, but also drives effective responses from the private sector, especially social media platforms, as well as civil society and independent media, who can use the information to pursue their own investigations,” the report explains.

Nordic states have adopted what the report calls an innovative “whole of society” approach to fighting Russian influence efforts, meaning that their schools teach critical thinking and “digital competence,” or how to differentiate between reliable and unreliable news sources online. The Swedish government has even deployed “Bamse the Bear, a popular cartoon character,” the report notes, “to teach children about fake news and the need to cross check sources of information.”

Work with the media to counter disinformation

While European states can respond to false stories with methods less likely to fly in the United States, some steps they take to work with the press and social media companies could succeed here, the report suggests. In the run-up to France’s 2017 presidential election, local media companies—in addition to complying with a government instruction not to publish the contents of material hacked from the campaign of then-candidate Emmanuel Macron—collectively worked to factcheck articles of websites that appeared unreliable. And nudged by French authorities, Facebook said in April 2017 that it had suspended 30,000 accounts for promoting propaganda or spam related to the French election. Meanwhile, in June 2017, Germany’s parliament passed controversial legislation that enabled large fines against social media companies that failed to quickly remove content considered illegal under the country’s stringent defamation and hate speech laws. Facebook then said it removed tens of thousands of fake accounts working to influence the election, gave German candidates cybersecurity training, and cooperated with the country’s security office. These efforts likely helped reduce Russian influence in both countries’ elections last year.

All these examples come from governments that did not benefit from, ignore, or encourage Russian interference in their elections. Briefing reporters Tuesday on the report, a foreign relations staffer said that while many of their recommendations could be addressed through legislation, President Trump’s refusal to “even acknowledge the threat” remains a big obstacle to boosting American defenses. “President Trump is squandering an opportunity to lead America’s allies and partners,” the report says. But the authors argue that despite the president’s resistance, the US can still find ways to “deter and defend against the Kremlin’s use of its asymmetric arsenal.”