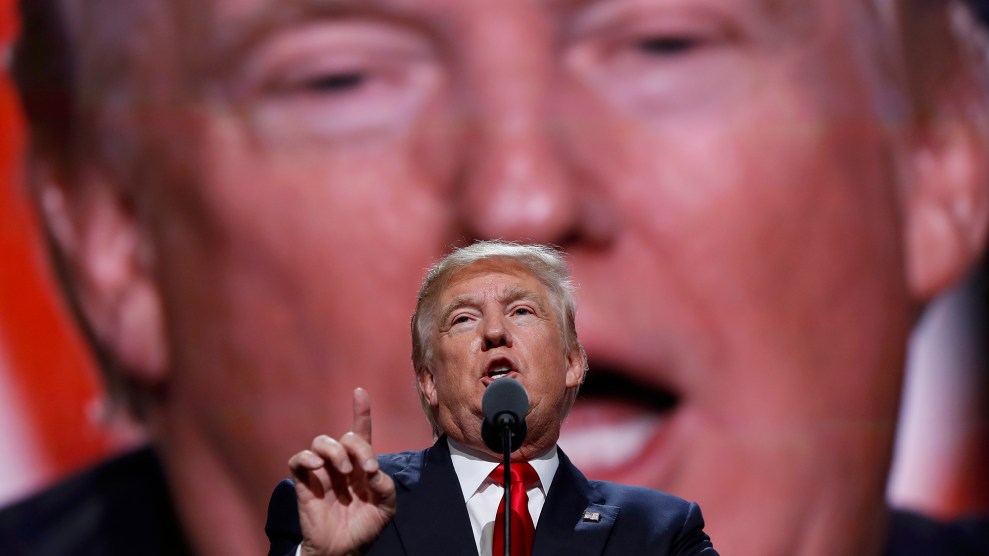 It began the day he was sworn in, with his vow to end “American carnage”—a direct echo of his autocratic pronouncement when accepting the Republican nomination that “I alone can fix it.” Donald Trump has chipped away at the pillars of democracy ever since. According to a new report from Freedom House, an independent watchdog group that has monitored democracy globally for decades, “The past year brought further, faster erosion of America’s own democratic standards than at any other time in memory.” The nation’s core institutions, the report says, have been “attacked by an administration that rejects established norms of ethical conduct across many fields of activity.”

In his first year as president, Trump often appeared driven by his urges for self-aggrandizement, self-enrichment, and revenge against anyone and everyone he perceived to be his political enemies—targets to be punched 10 times harder or screwed 15 times harder than they’ve punched or screwed him. He has used the presidential platform to taunt and threaten, going after federal judges, members of Congress, law enforcement leaders, celebrities, professional athletes, private citizens, and, of course, his greatest bête noire: the “Fake News” media, which he has blasted hundreds of times since taking office.

Trump had already shown America who he was during the 2016 campaign, and at Mother Jones we took Maya Angelou’s advice and believed him. A few weeks into his presidency, as some entertained the illusion of Trump “pivoting” to being more presidential, we began tracking his authoritarian behavior with our “Trumpocracy” project. Sure enough, his demagoguery, lying, and disdain for the rule of law continued without fail.

To what degree that has been by design or chaotic ineptitude is up for debate. But the ominous “firehose” effect it can have on the public is well understood by scholars of modern propaganda-driven dictatorships: a process that includes distraction, confusion, further polarization, and ultimately, complacency.

Another new report assessing Trump’s first year in the White House, “The Republic at Risk,” reaffirms the importance of documenting the daily absurdities: “The turn away from democracy need not be premeditated; an incompetent leader with authoritarian tendencies can pose as much of a threat as one with a systematic plan to dismantle checks and balances.” The bipartisan joint report from Protect Democracy and Stand Up Ideas, two groups comprised of government and legal experts, further warns that if Trump were to follow the path of other emerging authoritarians, “he would first erode the norms and ideals integral to a democratic society, then move into actual institutional changes once the public is sufficiently distracted, exhausted, and cynical.”

Following long-running calls for his 2016 political opponents to be prosecuted and jailed, Trump made a particularly disturbing statement in December, declaring in a New York Times interview that he has an “absolute right” to do whatever he wants with the federal law enforcement system. As special counsel Robert Mueller’s Russia investigation has accelerated, Trump has openly trashed the reputations of the FBI and Justice Department, even accusing a senior FBI agent of “treason.” Since June, he has repeatedly joined partisan supporters in denouncing an alleged “deep state” conspiracy against him, including his belief that “very bad and evil people” in Washington are trying to sabotage his presidency.

Endless war on the media

Where to begin? Beyond his farcical tweets about “fake news trophies” and “fake news awards,” Trump’s campaign against the free press is quite serious. He and his aides have singled out and threatened multiple journalists personally, including author Michael Wolff (“mentally deranged”), CNN’s Don Lemon (“the dumbest man on television!”), ABC News’ Brian Ross (“fraudster”), CNN’s Jim Acosta (a target of bullying tactics), ESPN’s Jemele Hill and the Washington Post’s Dave Weigel (both fingered to be fired), and others. On more than one occasion Trump has promoted social-media imagery depicting violence against CNN, including the network’s logo amid splattered blood on the sole of his shoe. And Trump’s Stalin-esque declaration just weeks into office that the media is “the enemy of the American people” has resonated with brutal regimes worldwide, which have seized the opportunity to pile on Trump’s weaponization of “fake news.”

Corrupt use of the office

On social media and in public remarks, the president has not hesitated to promote the personal financial interests of his family and partisan supporters. Beneficiaries have included Fox News’ Sean Hannity—Trump twice endorsed a film Hannity produced—and “Fox and Friends” host Brian Kilmeade, Sheriff David Clarke, Dr. Robert Jeffress, and former Trump campaign officials Corey Lewandowski and David Bossie, all of whose new books Trump specifically touted on Twitter. At an August 2017 press conference in the aftermath of neo-Nazi violence in Virginia, Trump plugged his winery in Charlottesville. And we haven’t begun to plumb the full scope of his potential ethical and financial conflicts of interest.

A great book by a great guy, highly recommended! https://t.co/3jbDDN8YmJ

Long before his “shithole” comments made his racism the subject of worldwide headlines, Trump established a clear pattern of singling out African American critics. When three UCLA basketball players were detained and then released by the Chinese government over a shoplifting incident, Trump declared he should’ve left them in jail, slamming one young man’s outspoken father as an “ungrateful fool.” Other targets have included the widow of a US soldier killed in Niger, a Florida congresswoman who defended the widow, the ESPN sportscaster Hill, and various NFL and NBA players who have criticized and peacefully protested against the president.

While @NFL ratings continue to plummet📉…

Not So Thankful: @Giants @OlivierVernon54 Kneels During the National Anthem on Thanksgiving Day (while a Master Sergeant of the United States Army sings) at FedEx Field…https://t.co/wWvkUMiIzc

Contrary to the unanimous assessment of US intelligence agencies, Trump has called Russian interference in the 2016 elections a “witch hunt” and a “hoax” so often and in such hyperbolic terms that Americans may well have grown used to the idea (which of course is the point). His wildly false claims that three to five million people voted illegally in 2016 began on Day Four of his presidency and continued into this January, when he reiterated that “the system is rigged” and blamed “Democrat States” for the demise of his so-called voter fraud commission.

Trump has displayed other autocratic impulses that have drawn less attention. He and his administration have urged at least five private businesses to fire employees whose politics enraged Trump (apparently with success in the case of Steve Bannon). Not only has Trump praised and sought closer ties with authoritarian leaders from countries around the world, he has joined several of them in specifically mocking and undermining the free press, including the Philippines’ Rodrigo Duterte, Poland’s Andrzej Duda, Kuwait’s Emir Sabah bin Ahmed al-Sabah, Kazakhstan’s Nursultan Nazarbayev, and Russia’s Vladimir Putin.

President Trump pointing the press corps to the door: "Out." https://t.co/6U4CHKHuea

The compilation of transgressions is long, surreal, and chilling. There is no indication that any of it will stop. The authors of “The Republic at Risk” suggest there is ample cause for hope: “Even under threat,” they write, “the United States has strong and durable democratic institutions.” But they also warn that a riven, inwardly focused Congress “has largely recoiled” from the danger, an assessment that clearly rests at the feet of the party controlling both chambers. Unless and until that condition changes, Trump will no doubt continue to push the boundaries of the American presidency in dark and disturbing ways.