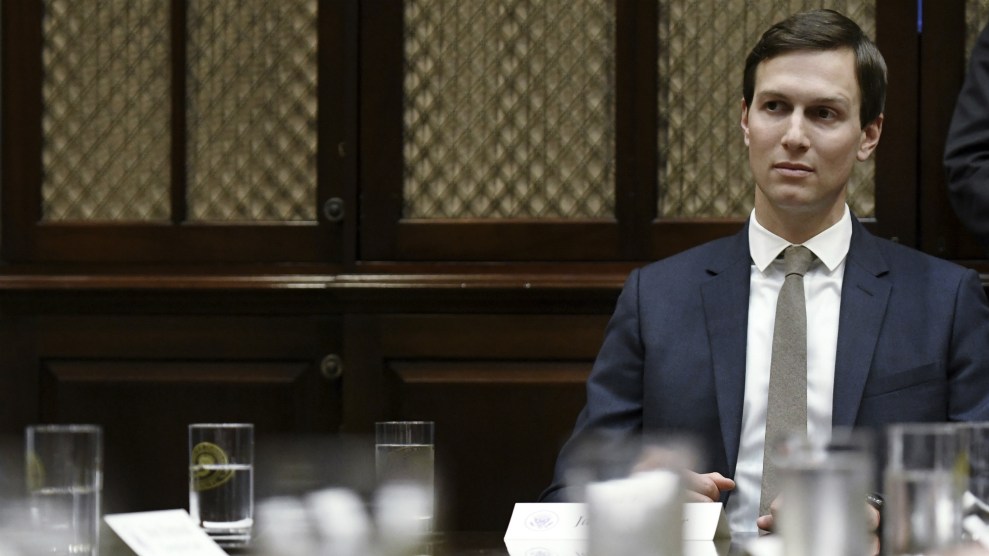 Update, Jan. 22, 2017: On Monday, Deutsche Bank released the following statement pushing back against the Manager Magazin report: “It is wrong to assert that Deutsche Bank supplied the German financial supervisory authority BaFin with a report stating that the real estate investor Jared Kushner or companies or persons associated with him may have channelled suspect funds via Deutsche Bank when executing their transactions. We are taking legal action regarding this reporting.”

Update, Jan. 23, 2017: A spokesperson for the Kushner Companies provided this statement to Mother Jones: “Kushner Companies has done nothing wrong with its relationship with Deutsche Bank. The Office of Special Counsel has not contacted us. There is no money laundering. There is no Russian connection. There are no improper loans. There are no misrepresentations. Everything has been handled in a normal, professional and commercial manner. Our transactions with Deutsche Bank were bid out on a competitive market rate basis. Any story claiming that we have done anything wrong in our dealings with Deutsche Bank is made-up and completely baseless. Importantly, not one news agency even called us before running these crazy allegations.” Manager Magazin has not retracted its original story.

A German business magazine is reporting that Deutsche Bank, the German financial giant which is a major lender to both President Donald Trump and his son-in-law Jared Kushner, identified “suspicious transactions” related to Kushner family accounts, and has reported them to German banking regulators. The bank is reportedly willing to provide the information to special prosecutor Robert Mueller’s team of investigators.

Manager Magazin, a respected German business magazine, reported in its latest print edition, which hit German newsstands on Friday, that Paul Achleitner, chairman of Deutsche Bank’s board, had the bank conduct an internal investigation and the results were troubling. Those results have been turned over to the Federal Financial Supervisory Authority—Germany’s bank regulatory agency, which is commonly known as BaFin.

“Achleitner’s internal detectives were embarrassed to deliver their interim report regarding real estate tycoon [Jared] Kushner to the financial regulator BaFin,” the Manager Magazin article, translated from German, reports. “Their finding: There are indications that Donald Trump’s son-in-law or persons or companies close to him could have channeled suspicious monies through Deutsche Bank as part of their business dealings.”

The magazine did not provide additional details about the “suspicious monies”, but Manager Magazin reports that Deutsche Bank’s leadership is worried about the public relations hit the bank might take when—not if—the results of the investigation are turned over to Mueller. “But what BaFin will do about [the bank’s findings] is not the bank’s greatest concern,” the article states. “Rather, it’s the noise that US special counsel Robert Mueller (73) will make in his pursuit of Trump. For he will likely obtain this information—a giant risk to [the bank’s] reputation.”

The article also claims that the investigation into Kushner and his family business is not over, and that internal technical issues are complicating the search, adding that “Achleitner simply doesn’t have a view of the whole picture.” Deutsche Bank did not respond to a request for comment, nor did Abbe Lowell, Kushner’s personal attorney.

If the report is true, it joins a flurry of efforts to unravel the Kushners’ financial dealings with the bank. In December, a German newspaper reported that Mueller had subpoenaed documents from Deutsche Bank —a report that Trump’s attorneys pushed back on. The bank is, by far, Trump’s largest creditor, having lent him more than $300 million in recent years through its private bank—a division that caters to wealthy clients and is sometimes willing to make loans that the commercial banking division won’t. The Trumps and Kushners relationship to Deutsche Bank is a particularly large conflict of interest, given the bank’s history of clashing with regulators—it has made several multi-billion dollar settlements with regulators in the US and Europe for its role in the LIBOR-rigging scandal and the 2008 mortgage crisis. It continues to be under investigation for its role in a possible money-laundering scheme that helped Russians evade sanctions and move money out of that country.

In late December, the New York Times reported that the US attorney in Brooklyn had subpoenaed the German bank for information relating to Kushner, though there was no word on exactly what the attorney was seeking.

Additionally, the bank loaned Kushner’s real estate company $285 million to refinance a planned renovation of a building it owns on Times Square in New York City. The building has struggled, and on Friday Bloomberg News reported that a large retail space previously occupied by celebrity chef Guy Fieri’s much-maligned theme restaurant has been sitting empty for weeks. Fellow celebrity chef Todd English was slated to move into the space with a new restaurant, but Bloomberg reports there seems to be no sign of that happening. Another tenant, a museum which features a miniature model of New York City, has also struggled to pay its rent on time. Deutsche Bank has sold the Kushner loan, but Bloomberg reports that the trouble with the retail tenants has triggered concerns with the new owners. In addition to the loan for the building, on his personal financial disclosure, filed last spring, Kushner reported a line of credit from Deutsche worth between $5 million and $25 million. Kushner holds that line of credit jointly with his mother.