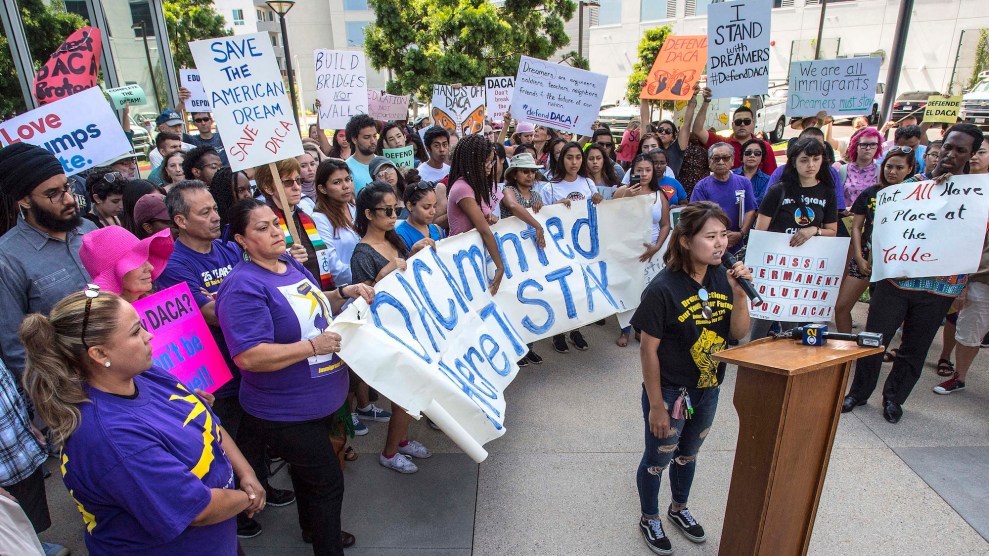 On Wednesday afternoon, after House Democrats met with White House Chief of Staff John Kelly, the spirit in Washington was one of stalemate. There was little progress toward a bipartisan deal to protect the Obama-era Deferred Action for Childhood Arrivals (DACA) program, which prevents the deportation of undocumented immigrants who came to the United States as children, in exchange for Democrats’ votes to prevent a government shutdown by January 19.

But across the country in Sacramento, at a press conference held by University of California system president Janet Napolitano, the mood was one of urgency. Flanked by California Attorney General Xavier Becerra and two other UC system officials, she urged the system’s 4,000 undocumented students to hurry to take advantage of the recent court ruling that reinstated DACA renewals after the Trump administration ended them last fall—a ruling the Trump administration has already asked the Supreme Court to review. The University of California is waging its own court battle to protect DACA: In September, Napolitano—who carried out the initial implementation of DACA as President Barack Obama’s homeland security secretary—filed a lawsuit against the Trump administration after the administration announced the program’s repeal.

“It’s important now to get your registration in,” she told students on Wendesday. “Reenroll now, reapply now for DACA, and know that we will continue this litigation.”

California is home to nearly a quarter of all DACA recipients, but colleges across the country have undertaken similar efforts to fight for the program, which protects an estimated 350,000 students from deportation. Higher education lobbyists spent more time on DACA than any other issue in the past year, according to Politico, even as colleges faced a barrage of policy changes, from a new tax on endowment earnings to the rollback of Obama-era Title IX recommendations.

“We see how higher education provides a great opportunity for these students, and perhaps more importantly, what they would bring to our campuses, enriching the educational experiences of students,” says Steven Bloom, the director of government relations for the American Council on Education, the nation’s leading higher education lobbying group. There’s ample opportunity to extend the benefits of higher education to the DACA population: 43.7 percent of DACA recipients are between the ages of 18 and 24.

Besides protection from deportation, DACA offers undocumented students a set of credentials to help them access higher education. Though undocumented immigrants cannot receive federal financial aid, DACA gives them Social Security numbers, which allow them to apply for grants at some schools and in-state tuition benefits in 21 states. They also receive work authorization, making them eligible for degree programs that require work experience, like medical residencies, and helping them save money to put toward their education. UC schools admitted undocumented students long before DACA, but the work authorization has increased their matriculation and retention numbers, according to Maria Blanco, the executive director of the UC Immigrant Legal Services Center. “These students don’t like to take out the loans,” she says, “because how are they going to pay them back if they can’t work?”

When DACA was rescinded in September, the UC system hurried to help students renew their status before the door closed a month later, says Blanco. Last week’s reinstatement sparked a new rush as students try to get their status renewed before the Supreme Court takes up the case and possibly reverses the lower court’s order. Every UC campus is holding workshops to help students with their paperwork and inform them of their rights.

“They’re almost numb, and it’s very hard for them to focus on school,” Blanco says of students she works with. “We say: Stay in school, don’t drop out, focus on what you can control, other people are trying to take care of other pieces of this.”

The uncertainty of the legal process is why colleges are advocating so strongly for a legislative fix, says the American Council on Education’s Bloom. “I don’t think anybody believes that [the court decision to reinstate renewals] is going to hold, particularly when it gets to the Supreme Court,” he says. The court ruling also offers no recourse for students who have do not yet have DACA status, since no new applications are being accepted. Colleges and advocacy organizations have sent letters—including two signed by more than 800 colleges—to members of Congress urging them to find a solution, while lobbyists like Bloom have worked with congressional staffers on potential legislation. Should the DACA court ruling be overturned without a legislative solution to preserve DACA, schools will need to decide for themselves how they want to help undocumented students finance their education, while students will have to attend college without the hope of work authorization or protection from deportation.

For now, there’s little indication that a DACA deal is imminent in Congress; Republicans may not even need such a deal to get the votes required to avert a government shutdown. That leaves higher education advocates like Bloom nervous, since DACA’s prospects are much weaker if it’s not pegged to critical legislation like this spending bill. “The best chance for fixing DACA must be part of a must-pass bill,” he says.