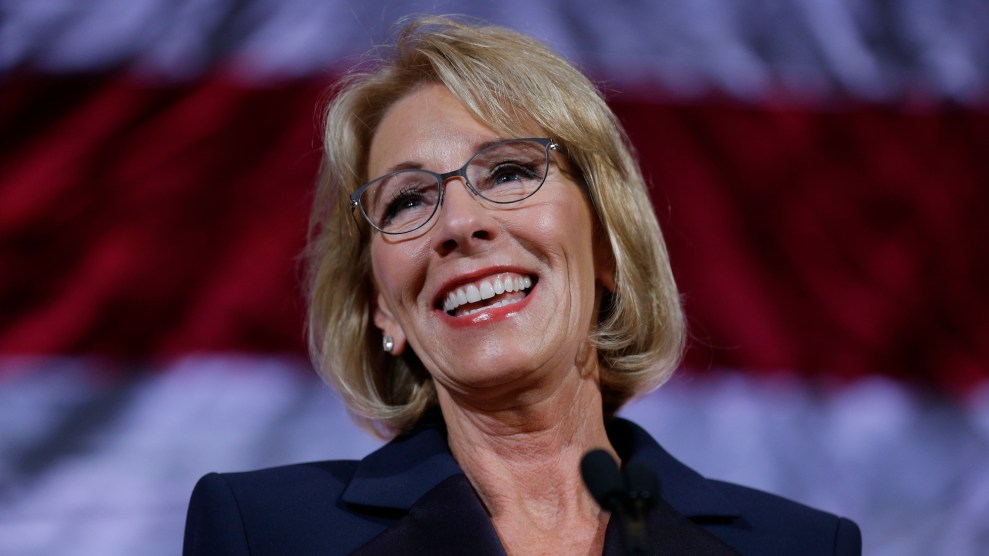 Three civil rights organizations that represent survivors of sexual violence are suing the Education Department, saying that a Title IX guidelines announced by Secretary Betsy DeVos last fall are having a “chilling effect” on sexual assault reporting. According to the federal lawsuit, filed Thursday, students who once planned to report campus rapes and other types of sexual violence and harassment to university authorities are now more hesitant to come forward.

For those who do come forward, the lawsuit alleges, the new guidelines make it harder for survivors to receive temporary protective measures and ultimately win a campus sexual misconduct case.

The groups—SurvJustice, Equal Rights Advocates, and the Victim Rights Law Center—are seeking to reverse an Education Department decision in September to roll back Obama-era guidance on how colleges should handle campus sexual assault cases and replace it with new guidelines that provide more protections for accused students. In particular, DeVos’ policy allowed colleges to apply a higher standard of evidence to sexual assault victims’ claims than that used in virtually all civil rights litigation. The policy also gave universities the option to block accusers—but not accused students—from appealing a college’s decision in a sexual misconduct case. The move was cheered by critics of the Obama-era guidance, some of whom who argued that the old policies discriminated against men. In a speech at George Mason University in September, DeVos trumpeted that her new guidelines would promote “fundamental fairness.”

But Thursday’s lawsuit claims that the real effect of the policies has been to discourage student victims from reporting incidents to their college administrations. Filing such a report is often the first step toward accommodations like counseling, new housing assignments, and access to student disciplinary proceedings. Fewer survivors have been approaching groups like SurvJustice to represent them, and more students are expressing doubts that any complaint they filed would be dealt with fairly. “Sexual violence and assault victims have expressed an unwillingness to report harassment and assault to campus authorities,” the complaint says.

The victim advocacy groups claim that the new guidelines were motivated by discriminatory beliefs about women held by DeVos and her acting civil rights chief, Candice Jackson, “that many girls and women who report sexual harassment misunderstood a harmless romantic advance and that those who report sexual violence often are either lying or have regret about a consensual sexual encounter.” As evidence, the lawsuit points to DeVos’s choice to meet with representatives of the National Coalition for Men, which has doxxed rape accusers, and with Georgia lawmaker Earl Ehrhart, who has claimed that universities that address sexual assault according to the Obama-era guidance “micromanage student sex lives.” It also cites a statement Jackson made to the New York Times, for which she later apologized, saying that “accusations—90 percent of them—fall into the category of ‘we were both drunk,’ ‘we broke up, and six months later I found myself under a Title IX investigation because she just decided that our last sleeping together was not quite right.'”

“This discriminatory mindset not only motivated decisionmakers at the Department, it flows from the top of the Executive Branch,” the complaint adds, in reference to President Donald Trump’s comments dismissing the long list of women—now more than 20—who have accused him of inappropriate sexual behavior, including sexual assault.

You can read the lawsuit, filed in federal district court in San Francisco, below: