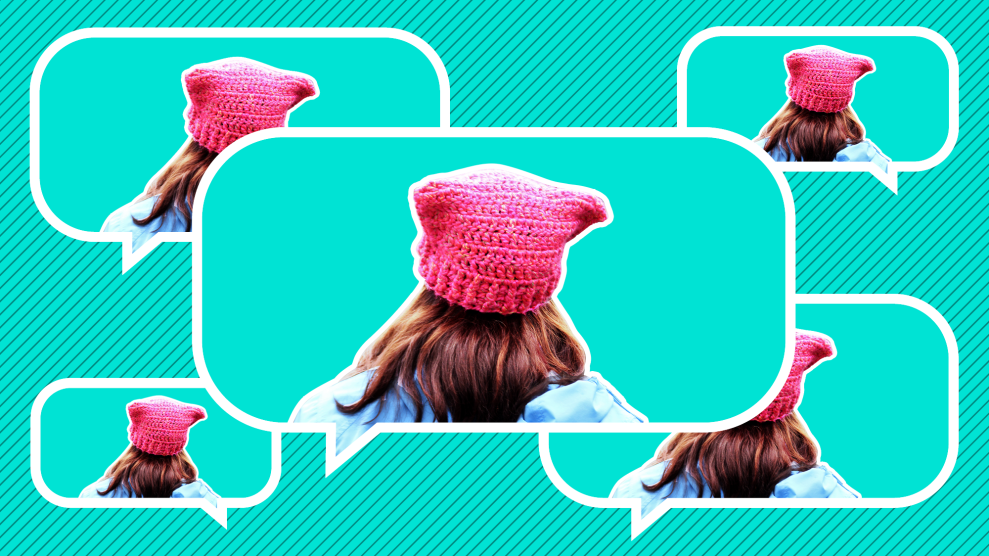 Janet Habib had always considered herself a “quiet activist.” A retired teacher in Mobile, Alabama, she had protested the Vietnam War in college, volunteered with Amnesty International for many years, and long kept up with political issues. But she had never worked on a political campaign—until last year, when she supported Doug Jones’s run for Senate.

At 71, Habib says she learned a whole new set of skills, from registering voters and phone banking to using social media to get out the vote. With a group of other organizers, she canvassed door-to-door in black neighborhoods she rarely went to. “It was so great, I can’t tell you,” Habib says. “If you live in the South and you’re a Democrat or Progressive, a lot of times you felt yourself so in the closet. You had to be careful what you said and who you talked to. And suddenly, we were out there not afraid to wear a button and a T-shirt. We were a small group against the majority.”

Habib attributes much of her involvement to attending the Women’s March last year, and joining a small group of men and women who wanted to continue their activism after the march. When Jones won, defeating Roy Moore in a race that became one of the most watched of the year, Habib says it gave her hope. The next step, she says, will be to keep pushing for other Democratic candidates in Alabama, and to turn more red states blue.

Earlier this month, we reached out to our readers about how the Women’s March changed them. Women across the country told us that the march inspired them to join political groups, attend town halls, and even start podcasts. Others began giving monthly donations to non-profit organizations or to local candidates. For many of the readers who responded to us, the momentum to remain active continued long after the initial march.

“I was afraid it would all go away, and that people would go back to their lives, and it really hasn’t,” says Linda Coleman, who is a Democratic party precinct chair in Dallas, Texas. “We’ve seen a lot of people come out and decide to run for office, and in Dallas county, we’re challenging Texas House seats we haven’t before. It’s really exciting seeing so many new people come forward.”

“I was afraid it would all go away, and that people would go back to their lives, and it really hasn’t.”

For Kerri Shaw, a social worker living in Athens, Ohio, a rural Appalachian town, the Women’s March inspired her to get more involved in local politics, where she knew she could make a difference. Since coordinating buses to the Women’s March in DC a year ago, she’s organized a self-care retreat for activists in her community, worked with a city council member to pass a resolution that makes Athens a “Welcoming Community” for immigrants and refugees, and helped pass a ban on conversion therapy. She’ll also be organizing the 2018 Women’s March in Athens.

“I didn’t see myself as political, even though other people probably did,” Shaw, who is 34 and a social worker, tells me. “I never would have imagined this level of engagement in politics two years ago. Now, it’s just daily.”

Kathy Ellis, a clinical social worker and addictions counselor, actually decided to run for the Democratic seat in Missouri’s 8th Congressional District, even though she knows it’s a long-shot campaign in a traditionally Republican state. “I tell people all the time—and in my work—that you have to get into action, you have to do something. So I decided to follow my own advice,” she says. “It has been a highlight of my entire life. I have enjoyed every minute of it, even though I have to drive four hours to the other side of the district—even when, sometimes, only ten people show up.”

“I tell people all the time that you have to get into action, you have to do something. So I decided to follow my own advice.”

Finally, just seeing other people get more involved was enough for Lia Russell, who is 23 and based in San Francisco, California. “I got more involved in anti-racism and political groups, but I had been doing that since before the election,” Russell writes. “What most heartened me was seeing older people—people older than my parents—and previously “nonpolitical” people realizing how pressing this moment was and getting more involved in efforts to combat the current administration’s efforts to roll back basic civil liberties.”

And for some women, the Women’s March led to much more personal changes. Vanessa, who wanted to use only her first name, says that marching in Seattle was “one of the most inspiring events” of her life—and helped serve as a catalyst in deciding she wanted to leave her now ex-husband. “Participating in the march was a really powerful experience, and it was really important to me, to find some outlet, to find support in that. He didn’t offer that at all, and that was kind of the final straw,” she says. “In the last year I have grown more independent and outspoken. I think the Women’s March, as well as the insanity of 2017 as a whole, greatly impacted who I am and how I approach life.”

One of the lasting effects of the Women’s March, many women noted, was knowing that there are now hundreds, even thousands of people, working on similar issues and willing to show up.

“It’s the unity and the solidarity that we brought back with us,” says Shaw, in Ohio. “The message is clear that we come back to our home communities and we get busy. And we haven’t stopped.”

Habib, in Alabama, says that one of the best things about the group she joined is the strength of its leaders—and that they have a great time. “We meet once a month in the evening, and we have a couple bottles of wine, some good snacks, and we work. We make these friendships,” she says. “It’s created a lot of power here, especially for women.”

Read some other comments from our readers, which have been lightly edited for length and clarity.

“It took me awhile to find my groove. Having found so much of the Trump agenda against my core values I was in overload. I found I was reactive rather than active. I now focus on my signature issues: healthcare, voting rights and money in politics. I am active with Indivisible, ACLU people power, Swing Left, American Promise. I have attended the Women’s Convention in Detroit and will attend The Progressive Women’s Caucus. I routinely call, email my representatives on the state and national level. I use tools like Resistbot and 5 Calls, I am more informed and engaged (at age 62) than ever in my lifetime. I fully intend to become active in the campaigns of candidates I support—time and money.”– Gayle Groshko, 62, Redford, Michigan

“Like so many, I’ve never been really involved in politics. Sure, I always voted. Never missed a Presidential election. Frankly, I thought Hillary had it, had it in the bag. Thought about putting a yard sign up in my little GA town, but mostly to piss off the neighbors. Then, the shock. And the shame. I should have, could have done more. So, I marched. I could write you an epic about the Women’s March but I bet you’ve already heard many stories about that transformative event. Back home… I went down to City Hall and met the manager. Started going to Indivisible meetings. Held my own small town March for Climate Change. And after Charlottesville, gathered the flock and stood up for ‘No Hate Here’ on the town square—and made the cover of the local paper. No, I’ll never be on the sidelines again.” – Frankie Hardin, 59, Newnan, Georgia

“I volunteered for the Hillary for America campaign and was devastated when she lost. I knew that the 2017 Women’s March was a moment in history and as a young women and avid progressive and feminist, there was literally nowhere else I’d rather be. [The experience] spurred me to intern on Capitol Hill over the summer for Congressman Jamie Raskin and run for—and get elected to!—the board of the University of Chicago College Democrats, as well as getting appointed to be Co-Chair of the Women’s Caucus of College Democrats of America. As a freshman at UChicago, I have taken every opportunity to get involved in my new community and fight for my progressive values. I live by the motto “well-behaved women seldom make history” and to me, that means making my voice heard, which I plan on doing at the 2018 Women’s March.” – Celia Hoffman, 18, Chicago, Illinois

“I’m an art director. March on Texas grew out of the Women’s March and I’ve been volunteering behind the scenes with them creating graphic design standards, producing social media templates and posts and basically using my work skills to assist the org’s goals of pushing progressive candidates in Texas. In addition to that, I’ve also joined up with a PAC creating billboards around the country focusing on flipping the house in 2018. Lastly, I’ve also linked up with national orgs like the Drug Policy Alliance producing materials and assisting with the opioid crisis and other DPA agenda items. Basically, since last year, I’ve focused my work skill sets into volunteering my time and working with organizations that fight this administration. I would describe it as “I make the boots on the ground look good.” – Carol Ann Lee, 32, Austin, TX

“Before the Women’s March last year I was at a loss regarding working against DT, Republicans and their racist tactics. The March, where I pledged, pointed me towards things I could and still do. I call, I write, I use Resistbot, and I try to attend rallies, which is tough when you don’t drive and live somewhere where driving is necessary. The March gave me direction which I needed to keep me from just being angry; to doing something with that anger.” – Lillian Santiago, 64, Atlanta, Georgia

“I marched. Then I marched again, and again, and again. I sent money to campaigns. I joined NAACP. I send daily emails to NC senators. I send a penny everyday to Corker. I have offered to volunteer for NC democratic party. They are useless. I talk to my children. I try to be a little kinder…I read that the Women’s March will have no lasting effect. It will blow over. The “ladies” will get tired and distracted. They forget one thing. I am a mother. I know what commitment, day in and day out, year after year, really means. When it comes to my children, there is only a fierce commitment to them. Thank you for asking.” – Dorothy Verkerk, 58, Chapel Hill, North Carolina