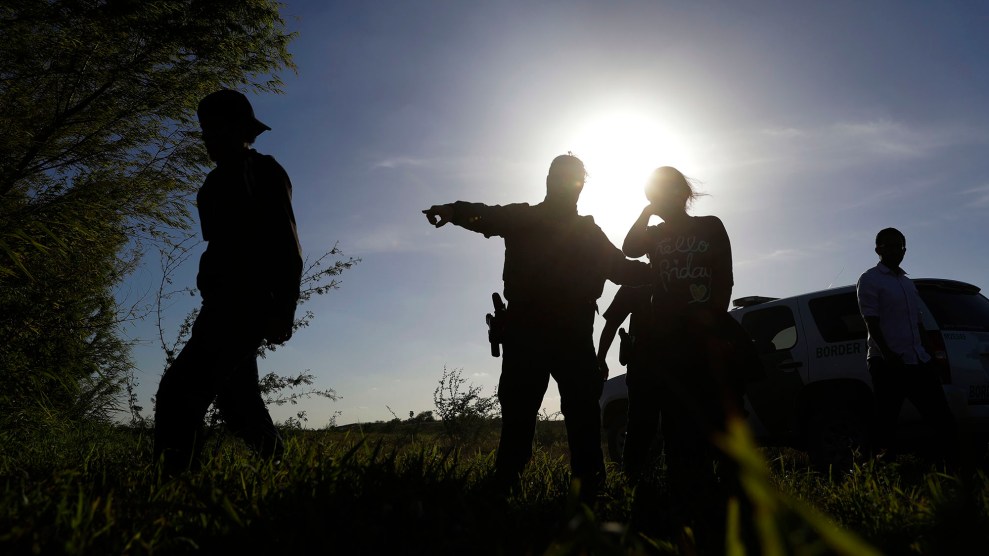 Customs and Border Patrol agents pick up immigrants suspected of crossing into the United States illegally along the Rio Grande near Granjeno, Texas, in August 2017. Eric Gay/AP

When President Trump issued an executive order last January to make the criminal prosecution of immigration offenses a “high priority,” those cases already accounted for more than half of all federal prosecutions. Now, a year later, a damning new report released on Thursday from Human Rights First, an international human rights advocacy organization, reveals that the Trump Administration is targeting not just illegal immigrants, but also refugees who are legally seeking asylum in the United States. Rather than sending them to an immigration judge to hear their claims, it is, in come cases, referring them for criminal prosecution and deportation—regardless of the dangers they face in their home countries.

The tactic “is a clear violation of US treaty obligations, and places asylum seekers at heightened risk of return to countries where they may face persecution,” said Olga Byrne, one of the authors of the report, in a statement. “Seeking asylum is a legal act, but this administration is committed to criminalizing asylum seekers—like all immigrants—in its efforts to sell its harmful, xenophobic policies.”

A Honduran woman who claimed to be fleeing death threats after witnessing a murder, a Pakistani man who had been tortured and whose wife and young daughter had been murdered by government officers, and a Mexican man who faced severe persecution for his sexual orientation were but a few among those that HRF found seeking asylum but were referred for criminal prosecution.

The report, replete with tales of border officials forcibly separating children from their parents and plea agreements that force asylum seekers to forego their claims for refugee status, is based on 10 months of in-the-field investigation, spanning from April 2017—when Attorney General Jeff Sessions, acting on the president’s order, instructed federal prosecutors to make “immigration offenses higher priorities” and to target “first-time improper entrants”—to early January 2018. The authors focused on the southern border, visiting eight federal courts spread throughout Arizona, New Mexico, and Texas, and met with judges, prosecutors, defense attorneys, and current and former border patrol agents.

In all, they observed more than 700 prosecutions of migrants charged with illegal entry or reentry in what are commonly referred to as “Operation Streamline” (OSL) courts—which house fast-tracked group hearings where people are processed en masse. In OSL courts—both those officially recognized as such and those that function in the same way but lack the title—a person’s initial appearance, preliminary hearing, plea, and sentencing can all take place in less than a minute. HRF discovered that the portion of those cases involving asylum seekers is not insignificant: The authors surveyed 39 defense attorneys who practice along the southern border and almost half said that a majority of the migrant clients they represent in criminal court are asylum seekers. HRF also uncovered dozens of cases of migrants who entered the United States seeking humanitarian protection and instead found themselves placed in these fast-tracked court proceedings.

Last June, Mother Jones spent a day in one such “assembly-line” court in Tucson, Arizona, alongside Natasha Arnpriester, one of the report’s authors, and witnessed nearly 50 immigrant detainees who were shackled at the waist, feet, and wrists shuffle into the courthouse and leave with fresh prosecutions, all within the span of a few hours.

None of the courts visited by HRF had policies in place to exempt asylum seekers from criminal entry or reentry charges, and only one had at times dismissed such cases, but “on an ad hoc basis, not as policy,” the report states. One defense attorney told the authors, “Most of the time, the prosecutors don’t seem to believe or care that a client came to seek asylum.”

“The Trump administration is vilifying asylum seekers and migrants by labeling them ‘criminals,'” says Arnpriester. “Subjecting those fleeing persecution to a dehumanizing system that punishes them for seeking protection, and in some cases returns them to persecution, creates a system where asylum seekers are deemed criminals, regardless of whether they are otherwise law-abiding members of society.”