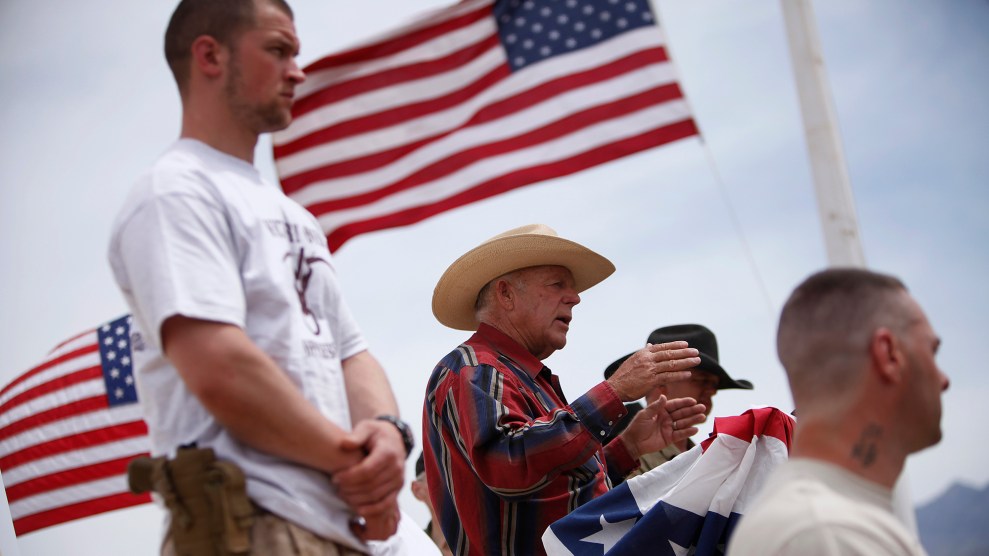 A federal judge in Las Vegas has dismissed the case against Cliven Bundy, the Nevada rancher who led an armed stand-off with law enforcement in 2014 after the Bureau of Land Management tried to seize cattle that, it said, he was illegally grazing on federal land. The episode turned Bundy into a folk hero of the right. On Monday, Judge Gloria Navarro threw out the conspiracy charges against Bundy, his two sons, and another man, citing “flagrant prosecutorial misconduct” on the part of US government lawyers.

As Mother Jones previously reported, the government failed to turn over critical information in the case, causing the judge to declare a mistrial last month:

At the heart of the case against the Bundys is a conspiracy charge alleging that the Bundys and other defendants lied about their situation when they sent out urgent national requests for militia members and other armed protesters to come to Bunkerville to face off against the BLM. The indictment alleges that the family used “deceit and deception” to recruit followers and gunmen, falsely claiming that the BLM had surrounded the Bundy ranch with snipers and that federal officers had used excessive force against Cliven’s son Dave Bundy, who was arrested a few days before the armed standoff while taking photos and protesting along a state highway.

But those claims, dismissed by the government as fiction by paranoid anti-government activists, have largely turned out to be true. And it’s taken the government nearly two years, and three trials, to admit as much in court.

The first disclosure came during an evidentiary hearing in October, just days before jury selection was set to begin. Ryan Bundy, representing himself, questioned a National Park Service employee about the surveillance cameras he alleged were set up near the ranch. The government had denied that they existed, but the Park Service employee acknowledged the presence of at least one camera trained on the ranch that was operated by the FBI. She said she had viewed some of the footage from it. In the same hearing, the defense was able for the first time to question Dan Love, the special agent in charge of the BLM’s law enforcement operation at the Bundy ranch. He disclosed during his testimony that there were indeed snipers around the ranch and that the government had commissioned a number of threat assessment reports on the Bundys. Those reports had not been turned over to the defense lawyers, despite their requests for them.

On Monday, Navarro ruled that the government’s conduct had been so egregious that a new trial could not go forward.

Bundy’s critics fear the outcome will embolden Bundy and his allies to continue to buck federal laws. “Federal prosecutors clearly bungled this case and let the Bundys get away with breaking the law,” said Kieran Suckling, executive director of the Center for Biological Diversity, in a statement. “The Bundys rallied a militia to mount an armed insurrection against the government. The failure of this case will only embolden this violent and racist anti-government movement that wants to take over our public lands.”

Now that the charges have been thrown out, Bundy’s supporters can end their quest to get him a presidential pardon from Donald Trump.