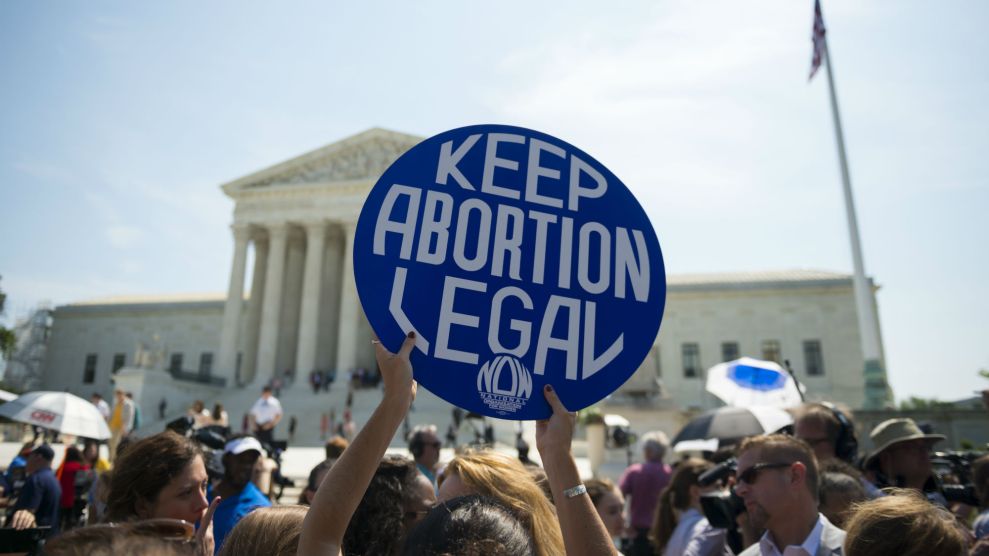 Editor’s note: Today, on the 47th anniversary of the case, it appears more likely than ever that women’s reproductive rights are at risk, so we’re re-promoting this look at the history of Roe v. Wade and the continued challenges ahead under Trump. This article was originally published in 2018.

In 1969, 22-year-old Norma McCorvey was living in Dallas, Texas, when she discovered she was pregnant with her third child. As a poor, single mother struggling with alcohol addiction, McCorvey felt she wasn’t prepared to take on raising another child.

She told her doctor she wanted an abortion, but under Texas law, abortion was prohibited except in the rare circumstance that a pregnancy threatened a woman’s life. McCorvey didn’t have many options: she could have a child, attempt an illegal abortion (which often led to infection or death), or sue for her right to safely end her unwanted pregnancy.

It was a huge gamble, but she chose the third option. At five months pregnant, she was referred to lawyers Sarah Weddington and Linda Coffee, who were looking for a plaintiff to fight Texas’ abortion law. McCorvey took on the pseudonym “Jane Roe” and filed a lawsuit against the district attorney of Dallas County, Henry Wade, in 1970. As we all now know, her case—Roe v. Wade—would rise all the way up to the Supreme Court and would be the turning point for abortion access in America.

“You have the Trump administration taking every opportunity to advance an extreme anti-choice agenda…I mean, this is the worst administration we have dealt with.”

It was 45 years ago today, on January 22, 1973, that the (all-male) Supreme Court ruled 7-to-2 in McCorvey’s favor. Although she had already given birth by then, the ruling legalized abortion in all 50 states—and the result rocked the country. At the time, Philadelphia’s Cardinal John Krol called the ruling “an unspeakable tragedy,” while Alan Guttmacher, the president of the Planned Parenthood Federation, said it was “an extraordinary event.” He predicted January 22, 1973 “will be a historic day.”

It indeed was. Although McCorvey, who died just last year, later renounced her stance on abortion, became a born-again Christian, and devoted her life to “undoing the law that bears [her] name,” the ruling has triumphed for decades and considerably improved reproductive safety, not to mention the freedom it has granted women to go to school, pursue careers, and find financial security.

But now, under President Donald Trump, the right to a safe abortion, along with a slew of other civil liberties, is in jeopardy.

Aside from allegedly grabbing pussies, Trump has interfered with women’s bodies in other far-reaching ways. He has, for example, cut the Obamacare contraception mandate requiring businesses to cover birth control in employee health insurance plans, removed protections for victims of workplace sexual harassment, threatened repeatedly to de-fund Planned Parenthood, and, most recently, made it a lot easier for doctors to deny medical care to women seeking abortions.

“You have the Trump administration taking every opportunity to advance an extreme anti-choice agenda,” Vicki Saporta, the president and CEO of the National Abortion Federation tells Mother Jones. “He has been a champion for those who oppose abortion care—and even those who oppose contraception—and does so at the expense of women’s life and health. I mean, this is the worst administration we have dealt with.”

Just last week, Trump became the first sitting president to address the March for Life, an annual anti-choice march, live via satellite, according to Press Secretary Sarah Huckabee Sanders. “Most important of all, it is the gift of life itself,” he said. “That is why we march and that is why we pray.” Vice President Pence said Trump was the “most pro-life president in American history.” He added, “With God’s help, we will restore the sanctity of life to the center of American law.”

Aside from allegedly grabbing pussies, Trump has interfered with women’s bodies in other far-reaching ways.

Although Trump had been pro-choice earlier in his life, he came out in staunch opposition to abortion during his presidential campaign. In March 2016, Trump infamously said that women deserve “some form of punishment” for abortion. He later clarified, saying he meant doctors, not women, should be “held legally responsible.” In October of the same year, Trump vowed, if elected, to appoint judges who’d overturn the Roe v. Wade decision.

“If we put another two or perhaps three justices on, that’s really what’s going to be—that will happen. And that’ll happen automatically, in my opinion, because I am putting pro-life justices on the court,” he said at an October debate after being asked if he wanted to see Roe v. Wade overturned. “I will say this: It will go back to the states, and the states will then make a determination.”

Despite the recent confirmation of conservative judge Neil Gorsuch (whose legal views have proven unfavorable to reproductive rights), legal experts say the chance of the Supreme Court overturning Roe v. Wade is still slim. It’s much more likely the court rules in favor of states’ authority to place excessive requirements on getting an abortion—like mandating that women have funerals for their aborted fetuses or receive approval from men first.

Restrictions like these, experts argue, could so severely limit access to abortion, it’d be as if Roe v. Wade never happened at all. “Some states have protected abortion access, while others have made it very difficult to access services,” Heather Boonstra, the director of public policy at the Guttmacher Institute, tells Mother Jones via email. Ironically, she says, this creates conditions “similar to the picture of abortion access pre-Roe,” when low-income women, like McCorvey, didn’t have the means to travel to other states to receive a safe abortion.

“Abortion may be legal in all 50 states, but if you can’t access the care, then it’s really an empty right,” Saporta says.