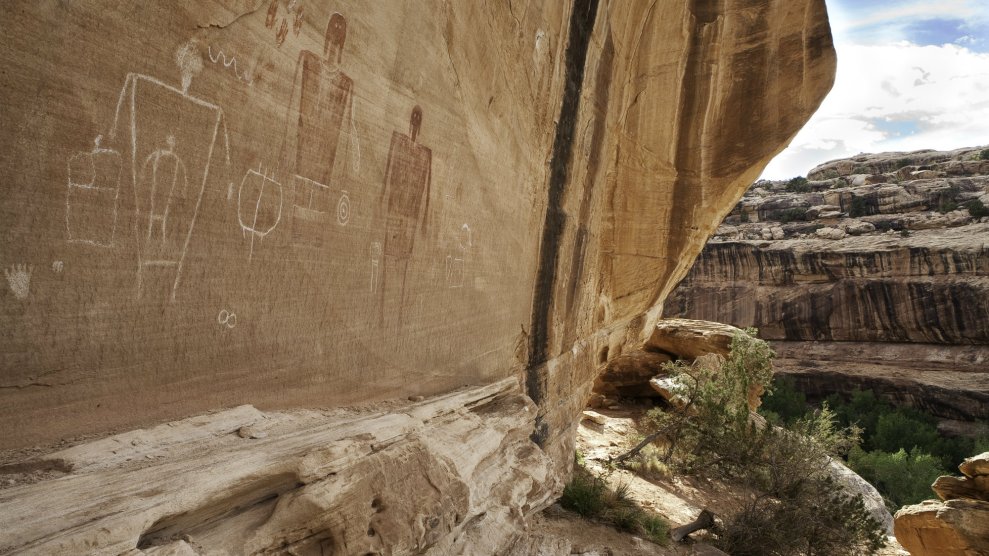 In a signing ceremony in Salt Lake City on Monday the president officially reduced the 1.9 million acres of Grand Staircase-Escalante National Monument by nearly half and Bears Ears by 85 percent. Before a crowd of supporters in front of the Capitol building, Trump said that by doing this he would “reverse federal overreach and restore the rights of this land to your citizens.”

On Tuesday, the Hopi tribe, the Navajo Nation, the Ute Indian tribe, the Ute Mountain Ute tribe, and the Zuni tribe filed a federal lawsuit against Trump, Interior Secretary Ryan Zinke, and several other officials alleging that Trump’s order that shrinks Bears Ears is in violation of the Antiquities Act—a law enacted in 1906 to prevent people from looting Native American artifacts from archaeological sites. Since then, the law has been mostly used by presidents to create national monuments in order to protect land from being developed. “[T]he president was plainly aware that he lacked the authority to revoke a monument,” the lawsuit states.

After years of lobbying from the five tribes that make up the Bears Ears Inter-Tribal Coalition, President Barack Obama designated Bears Ears as a national monument last December. The federally protected land contains thousands of Native American cultural, archeological, and sacred sites. The tribes still use Bears Ears to collect plants, objects, minerals, and waters for religious and cultural ceremonies. The suit describes Bears Ears “as so culturally and spiritually significant that some ceremonies use items that can only be harvested from Bears Ears.”

Trump supporters are heralding the executive order as a win for states rights. They say that shrinking the monuments will open up the land for hunting, fishing, and other recreation, and that the backlash has come from individuals and interests not directly tied to the issue. “No one loves public land more than I do,” Zinke said on a Tuesday press call, “what I do love is public land being available for the benefit of the people. Public lands are for public use not for special interests.”

The tribes are worried that if the radical shrinking of Bears Ears is allowed to stand, it “will immediately be subject to the devastating damage of oil and gas drilling…widespread vandalism and looting.” The lawsuit also warns about the future of the United States’ monuments if Trump’s action isn’t revoked. “If this unprecedented and unlawful action is allowed to stand,” they write, “the 129 national monuments across the United States will be at risk.”