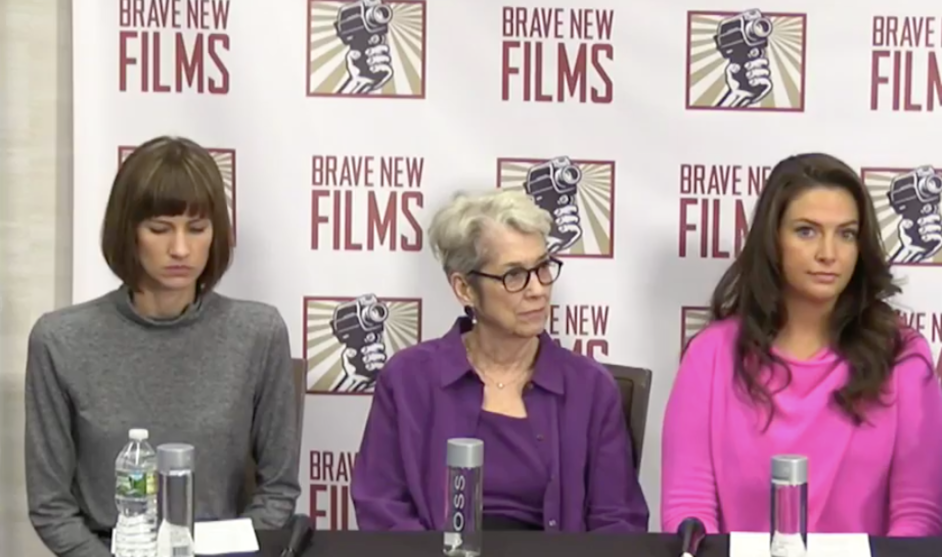 Three women who came forward last year to accuse then-candidate Donald Trump of sexual misconduct are renewing their stories in hopes that Congress will open an investigation into their allegations. The women—Jessica Leeds, Samantha Holvey, and Rachel Crooks—recounted their stories during two media events Monday and asked why it was acceptable for the president to escape the kind of scrutiny other politicians and high-profile figures have experienced in light of the national conversation around sexual harassment in recent months. “Let’s try this again,” Holvey said.

“If they were willing to investigate Sen. [Al] Franken, it’s only fair that they do the same for Trump,” Crooks said during a press conference hosted by Brave New Films, a liberal documentary production company that released 16 Women and Trump, which focuses on Trump’s accusers and sexual misconduct allegations.

In October 2016, Leeds and Crooks told the New York Times that Trump inappropriately touched them—Leeds during an incident decades before as she sat in a plane seat next to Trump, Crooks while she worked as a receptionist for a real estate company located in Trump Tower in Manhattan. That same month, Holvey described to CNN how Trump would gawk at her and other beauty pageant contestants while they prepared backstage for events.

“We’re private citizens, and for us to put ourselves out there to try to show America who this man is, especially how he views women, and for them to say, ‘We don’t care,’ it hurt,” Holvey said in a separate appearance on Megyn Kelly Today. “Now it’s just like, all right, let’s try round two. The environment’s different. Let’s try again.”

The women on Monday also condemned Trump’s recent endorsement of Roy Moore, the Alabama Senate candidate who has been accused of sexually molesting teenage girls. “The endorsement is disgusting,” Holvey said. “Absolutely disgusting.” Crooks described Trump’s support as the president “passing the torch” to Moore.

The White House dismissed the allegations as politically motivated. “These false claims, totally disputed in most cases by eyewitness accounts, were addressed at length during last year’s campaign, and the American people voiced their judgment by delivering a decisive victory,” the White House said in a statement released Monday. “The timing and absurdity of these false claims speaks volumes, and the publicity tour that has begun only further confirms the political motives behind them.”