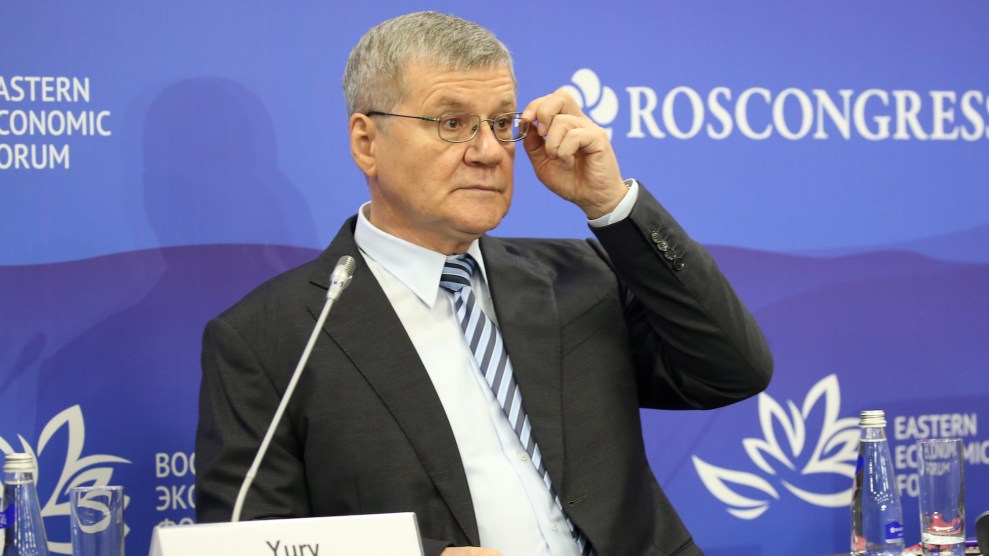 The Treasury Department has slapped sanctions on Artem Chaika, the son of Russian prosecutor general Yuri Chaika. A June 2016 email to Donald Trump Jr. described the Russian prosecutor as a participant in an effort by Moscow to aid the Trump presidential campaign by sharing material damaging to Hillary Clinton.

Artem Chaika, who has been accused of profiting from corrupt ties to the Russian government, is among 20 people and dozens of businesses that Treasury’s Office of Foreign Assets Control has sanctioned in the last two days under laws targeting human rights abuses and corrupt officials around the world. Chaika and 14 others were sanctioned Thursday under an expanded version of the 2012 Magnitsky Act, which targeted certain Russian officials with sanctions. Individuals listed under the Magnitsky laws are barred from access to property and interests under American jurisdiction. That includes a ban on accessing money held in US-based banks.

“Artem Chaika has used his position of familial privilege as the son of Russia’s Prosecutor General to steer government-contracting funds to his associates and punish competitors, fueling Russia’s widespread corruption.”

“Artem Chaika has used his position of familial privilege as the son of Russia’s Prosecutor General to steer government-contracting funds to his associates and punish competitors, fueling Russia’s widespread corruption,” Sens. John McCain (R-Ariz.) and Ben Cardin, (D-Md.), the main sponsors of the Magnitsky Act, said in a statement Thursday.

The new sanctions were imposed after President Donald Trump on Thursday issued an executive order that declares that “serious human rights abuse and corruption around the world constitute an unusual and extraordinary threat to the national security, foreign policy, and economy of the United States.” The order is required under the Global Magnitsky Act, enacted in late 2016 under President Barack Obama. It is not clear if Trump knew that his order would lead Treasury to sanction Chaika and others. Trump “followed the recommendation of the Treasury and State Departments and will continue to hold human rights violators accountable,” a White House spokesman said in an email.

Cardin told Mother Jones that he and other members of Congress worked on the list with the State and Treasury departments. “We didn’t see any hesitation on the Russia-specific list,” he said. Cardin said he was not aware of White House involvement in the process. “This is our policy,” Cardin said. “We passed the law.”

The sanctions are the latest complication for Trump’s bid to improve relations with Russia. Early this year, Trump reportedly pressed the State Department to look into a unilateral repeal of sanctions on Russia. He later opposed a new Russia sanctions bill that Congress passed this summer in retaliation for Russia’s interference in the 2016 election. Trump reluctantly signed the measure after it became clear Congress would override a veto. The president has reportedly complained that the ongoing investigations into his campaign’s contacts with Russia have hindered his ability to pursue his preferred policy toward Moscow. But Trump’s efforts to ease relations with Russia have also drawn pushback from within his administration.

In an additional step that appears to buck the president’s policy goals, the State Department this month approved the largest sale of arms to Ukraine since 2014. The transaction, which Trump reportedly okayed after a few months of delay, would cut against the Trump campaign’s move at the 2016 Republican convention to remove from the party’s platform a provision that called for providing weapons to Ukraine. Putin—who unilaterally annexed Crimea from Ukraine in 2014 and backs separatists in eastern Ukraine—vociferously opposes such sales.

The Magnitsky Act, along with Russia’s retaliatory ban on adoptions by US parents, was a nominal topic at the June 9, 2016, meeting at Trump Tower between a Russian attorney, Natalia Veselnitskaya, and Donald Trump Jr., Trump campaign chairman Paul Manafort, and Jared Kushner, President Trump’s son-in-law. The meeting was arranged in part by Aras Agalarov, a Russian developer, and his son Emin, a pop singer. The senior Agalarov, who in 2013 partnered with Trump on the Miss Universe pageant in Moscow, is reportedly close with Yuri Chaika and friendly with Putin.

Emin Agalarov’s publicist, Rob Goldstone, appeared to reference Chaika in an email to Trump Jr. arranging the Trump Tower sit down. Goldstone said Russia’s “crown prosecutor” had “offered to provide the Trump campaign with some official documents and information that would incriminate Hillary and her dealings with Russia and would be very useful to your father. This is obviously very high level and sensitive information but is part of Russia and its government’s support for Mr. Trump—helped along by Aras and Emin.” Trump Jr. responded enthusiastically, writing “I love it.” (Trump Jr. later said he was disappointed with the material on Clinton that Veselnitskaya ultimately presented.) The House intelligence committee interviewed Goldstone Monday and Trump Jr. earlier this month.

Veselnitskaya has acknowledged meeting Chaika prior to the Trump Tower gathering. During this meeting, she says she passed on negative information concerning Bill Browder, an investor who has been the Magnitsky Act’s leading proponent. Veselnitskaya told the Senate judiciary committee last month that Trump Jr. asked her for documents implicating Clinton in wrongdoing. She told Bloomberg that Trump Jr. also pledged that his father would consider repealing the Magnitsky Act if he won the presidency.