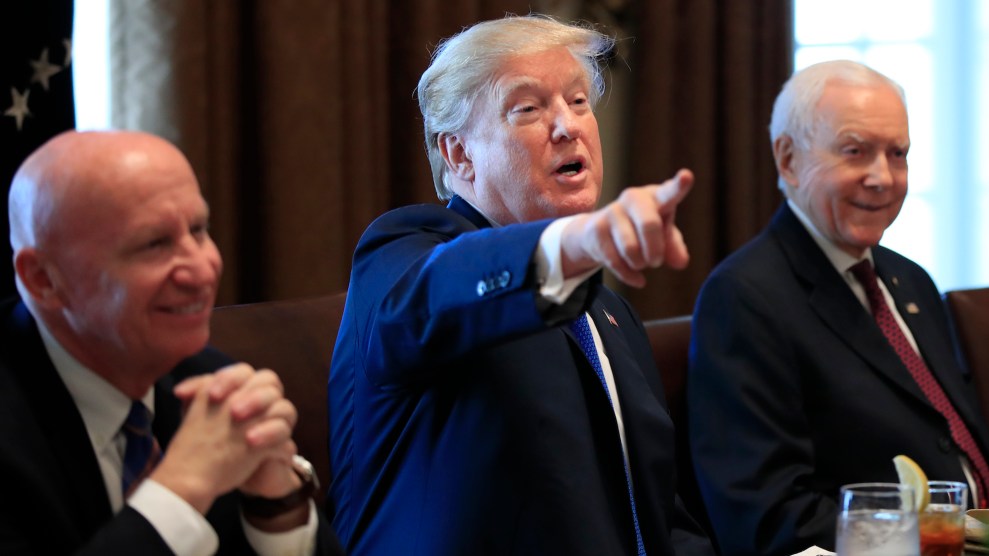 After decades of chastising the idle, Republicans are pushing a tax bill that specifically advantages rich people who don’t work. But they aren’t applying that standard for poor people. Once the tax bill passes, Republicans plan to make it easier for states to add work requirements for welfare recipients.

The Senate tax bill gives business owners nearly three times more benefits than workers with wages and salaries, according to a new analysis from the nonpartisan Tax Policy Center. Adam Looney, a senior fellow at the Brookings Institution, told The New York Times that if the bill becomes law it would be the first time that “wage earners were substantially penalized” by the tax code.

The diverging treatment comes from how the tax bill treats the 95 percent of businesses that are structured so that profits are taxed as individual income. Republicans portray these businesses, which are known as “pass-throughs,” as “ma and pa bakeries and family-owned salons.” In reality, most pass-through income goes to people in the top 1 percent—including the Trump family.

The House tax bill cuts the top income tax rate for pass-throughs from 39.6 percent to 25 percent, which would cost taxpayers nearly $600 billion over 10 years. About 86 percent of small business owners would not benefit because all of their income is already in the 25 percent tax bracket or lower. Republicans’ much-touted ma and pa shops usually don’t earn make enough to be in the top tax brackets, which kick in at $153,000 of taxable income for couples.

The most explicit benefits for the passively rich come from Republicans’ attempt to prevent people from turning themselves into a one-person business. To do that, the House bill makes professionals like lawyers ineligible for the pass-through benefit, while those who actively run an eligible business pay a reduced rate. Pass-through owners only automatically pay the 25 percent rate when someone else runs their business. In other words, the wealthiest Americans are rewarded for not working.

Daniel Shaviro, a tax law professor at New York University, labels it the “New Plutocratic Industrial Policy,” adding that it’s the the worst federal income tax proposal he’s ever seen. Shaviro tells Mother Jones that the Senate tax bill is “slightly less plutocratic” because it allows business owners in all tax brackets to deduct a share of their pass-through income. Nevertheless, he says the policy works great for an heir on “the international ski circuit.”

Howard Gleckman, a senior fellow at the Tax Policy Center, writes that the Senate bill still “violates a basic rule of good tax policy: that taxpayers with similar situations should be treated similarly.” He explains that it would lead to plumbers who work for a company paying higher taxes than those who set themselves up as an LLC, even though they both do the same work.

When it comes to low-income Americans, Republicans are increasingly pushing for them to work more. They hope to reduce government spending by overhauling federal safety-net programs—from welfare to Medicaid, and perhaps even Medicare, which Donald Trump repeatedly promised not to cut during the presidential campaign. House Republicans’ budget plan for 2018 called for cutting Medicare funding by almost $50 billion per year. Last week, House Speaker Paul Ryan (R-Wis.) told a Colorado radio station that “it’s the health care entitlements that are the big drivers of our debt,” adding that he’s having some success bringing Trump around to his point of view.

Ryan also argued that we have to address the fact that “we have a welfare system that’s basically trapping people in poverty and effectively paying people not to work.” The centerpiece of upcoming reform proposals will likely be stricter requirements for receiving benefits. A handful of states are trying to impose work requirements on Medicaid recipients, which the Trump administration has suggested it will support. A study published in the Journal of the American Medical Association on Monday found that the vast majority of people in Michigan covered by Obamacare’s Medicaid expansion are already working, retired, or unable to work. About a quarter are currently “out of work.” But, as Vox explains, there are reasons why many don’t have jobs; two-thirds say they have a chronic illness, and more than a third say they’ve been diagnosed with a mental illness. Medicaid work requirements could cause them to lose health insurance they clearly need.

Wisconsin Gov. Scott Walker said last week that he is moving forward with a plan to make some food stamp recipients take drug tests. The Department of Agriculture announced one day later that it will work with states to “promote self-sufficiency” through the food stamp program, potentially through stronger work requirements. Agriculture Sec. Sonny Perdue said in a press release that the program “was not intended to be a permanent lifestyle.”

The White House, meanwhile, is preparing an executive order that will likely force a broad review of virtually all anti-poverty programs—including food stamps and assistance for veterans. The president is expected to sign the executive order as soon as January, according to Politico. Rep. Kevin Brady (R-Texas) has said welfare reform will be the focus of next year’s budget.

As my colleague Stephanie Mencimer wrote in October, there’s much less welfare left to reform.

After President Bill Clinton and Republicans in Congress ended welfare as we knew it in 1996, transforming the entitlement program into a block grant called Temporary Assistance for Needy Families (TANF), the number of poor people receiving federal cash assistance plummeted, along with the monthly benefits. The budget for the program has remained unchanged at $16 billion since 1996; inflation has reduced its actual value by a third since then.

The share of families below the poverty line that receive welfare benefits has dropped from 68 percent in 1996 to 23 percent in 2016, according to the left-leaning Center on Budget and Policy Priorities. Work requirements have played a major role in driving that decline, and the subsequent increase in families facing severe poverty.

That drop hasn’t deterred Trump. “Does anybody want welfare reform?” he asked at a recent tax rally in Missouri. “I know people, they work three jobs and they live next to somebody who doesn’t work at all,” Trump said. “And the person who’s not working at all and has no intention of working at all is making more money and doing better than the person that’s working his and her ass off.”