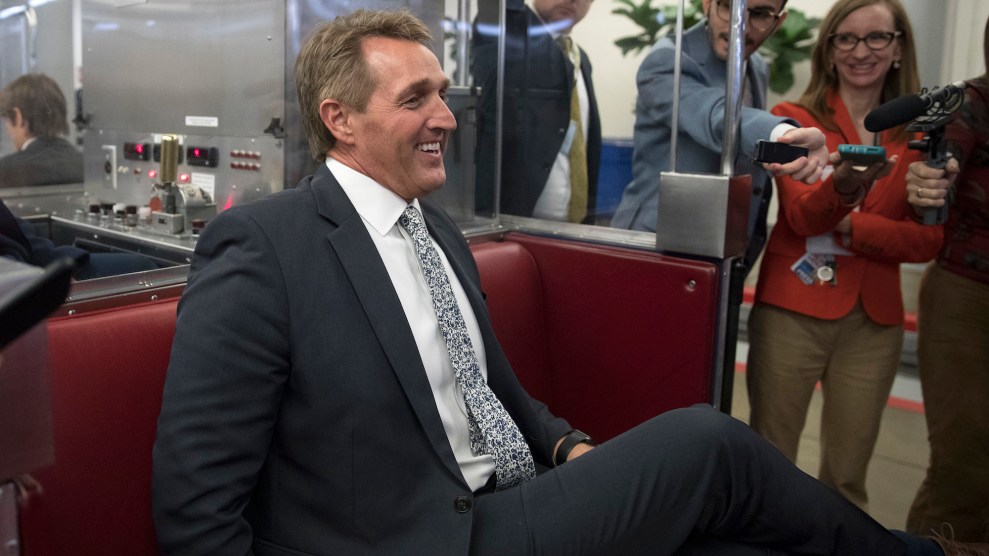 Sen. Jeff Flake (R-Ariz.) boards the subway at the Capitol on Thursday.Carolyn Kaster/AP

Midday Friday, Sen. Jeff Flake (R-Ariz.) appeared to give Republicans the 50th vote needed to pass their tax bill later today. Sens. Ron Johnson (R-Wis.) and Steve Daines (R-Mt.) are also on board after securing a bigger tax cut for businesses known as “pass-throughs.” Nearly 70 percent of pass-through income go to the top 1 percent of Americans.

The three senators’ support means that Republicans should be able to pass the bill without Sens. Susan Collins (R-Me.) and Bob Corker (R-Tenn.)—the last two Republicans holdouts. Collins has not yet committed to voting for the bill, but said on Friday that she was encouraged after winning a concession on deductions for state and local property taxes. Corker is not happy that the bill adds about $1 trillion in deficit spending over the next 10 years, and it’s still not clear how he’ll vote.

Majority Leader Mitch McConnell (R-Ky.) now says “We have the votes.” If Collins votes for the bill, Republicans would have at least 51 votes. If Collins and Corker vote against, Vice President Mike Pence could be called in to break a 50-50 tie vote in favor of Republicans.

Flake says part of the reason he is on board is that he has secured a “firm commitment” from Senate leaders to address the status Deferred Action for Childhood Arrival (DACA), a 2012 executive action that has protected roughly 800,000 young immigrants, known as “Dreamers,” from deportation.

Moments after Flakes’s announcement, Marc Short, the White House’s congressional liaison, said the Trump administration is “excited to be part of the conversation” on DACA. When asked if DACA would be addressed this year, he said the administration wants to get taxes done first, and PBS reports that Short said that there is no commitment on the substance of any DACA deal. That said, Short says the administration will be “happy to include” Flake.