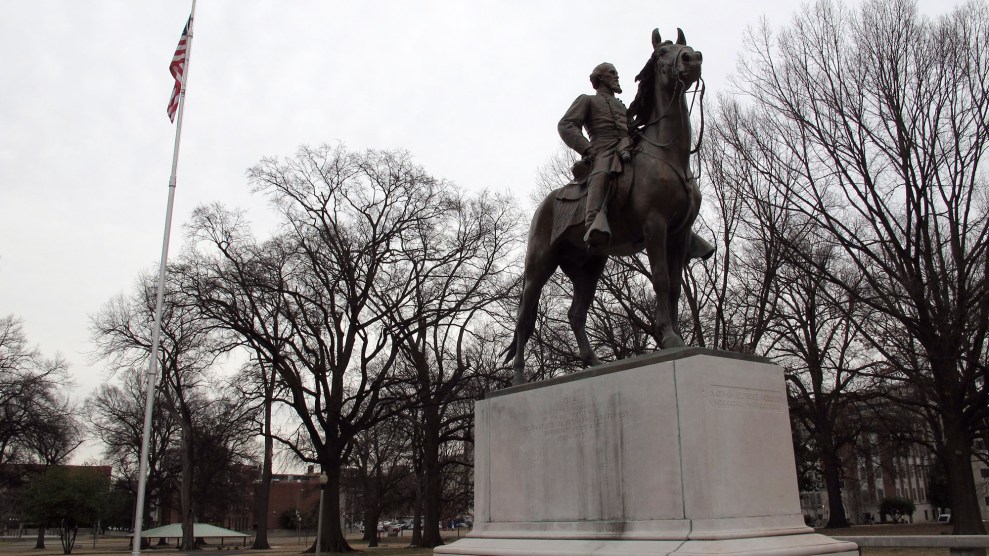 The statue of Nathan Bedford Forrest that used to stand in a Memphis park.Adrian Sainz/AP

After more than two years of fighting with the state of Tennessee, the Memphis City Council cast a unanimous vote on Wednesday night to remove two Confederate statues in city parks.

That same night, the statues came down.

As I reported in October, the city has been working to remove statues of Ku Klux Klan Grand Wizard Nathan Bedford Forrest and former Confederate President Jefferson Davis from two of its public parks for more than two years but has been overruled by the state repeatedly because of a law called the Tennessee Heritage Protection Act. That 2013 law gives the Tennessee Historical Commission the power to essentially veto requests to remove historic landmarks, such as state memorials to the Confederacy.

To circumvent the law, the City Council sold the two parks to a nonprofit, Memphis Greenspace, for $1,000 each. The nonprofit, which is owned by Shelby County Commissioner Van D. Turner Jr., appears to have been created for this purpose—it filed its incorporation papers in October. In September, the City Council had passed a law that allows parks to be sold for less than their market value.

According to the mayor’s office, the statue of Forrest came down at 9:01 p.m. local time—a nod to the city’s area code. The citizen effort to remove the two statues is known as Take ‘Em Down 901. A crowd chanted, “The people united will never be defeated.” The statue of Davis came down around 10:45 p.m., to the sound of locals singing “Hit the Road, Jack” and cheering, the New York Times reported.

Memphis citizens had been pushing to have the statues taken down before April 4, 2018—the 50th anniversary of Martin Luther King Jr.’s assassination in the city.