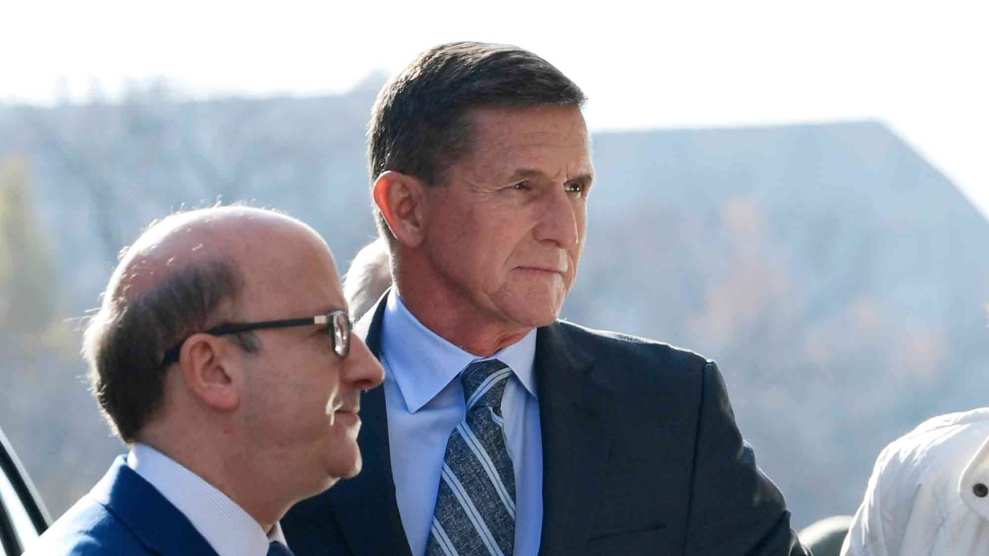 On Friday morning, special counsel Robert Mueller announced that he had filed a criminal charge against Michael Flynn, President Donald Trump’s short-lived national security adviser (who had led the “lock her up” cheers at the last Republican convention), on two counts of lying to the FBI, and soon after that Flynn pleaded guilty in a federal court in Washington as part of a cooperation deal with Mueller. This means that both Trump’s top campaign official, Paul Manafort, and his top national security campaign aide now stand accused of criminal activity.

Mueller released a two-page “information” document detailing the two counts. The first was no shocker: that Flynn had lied to FBI agents about a conversation he had with Sergey Kislyak, the Russian ambassador to the United States, in December 2016, during the presidential transition. Flynn told the agents that he had not asked Kislyak to restrain Russia’s response to sanctions President Barack Obama was imposing on Moscow for its underhanded meddling in the 2016 campaign. He also told the agents that he did not recall that Kislyak had said that Moscow would indeed moderate its response as a result of his request. But according to Mueller, Flynn had made the request and knew Moscow had done what he asked.

It has been previously reported that there was evidence—most likely intelligence intercepts—suggesting Flynn had lied about this interaction with Kislyak. On the day of that conversation, when it appeared Russia would indeed not be responding harshly to the Obama sanctions, Trump tweeted, “Great move on delay (by V. Putin)—I always knew he was very smart.”

The other count expands the story. It notes that on December 22, 2016, Flynn had asked Kislyak to delay or vote against a UN Security Council resolution condemning Israel’s construction of settlements in disputed territories, but that Flynn denied doing so when interviewed by the FBI. Israel was fighting hard against the resolution and requested that the Obama administration veto the measure. At the time, Trump publicly sided with the Israeli government. The resolution was approved on December 23, with the United States abstaining.

Israeli officials, it was known, had reached out to Trump transition team officials prior to the vote in an effort to delay the vote or block the resolution. Those Trump officials included Jared Kushner, Trump’s son-in-law, and Stephen Bannon, then Trump’s chief strategist. Mueller’s indictment discloses that Flynn was part of this endeavor and took concrete steps to thwart the foreign policy of the Obama administration in its final month. (Two weeks ago, the Wall Street Journal revealed that Mueller was investigating Kushner’s conversation with Israeli officials about this matter. The newspaper noted that a 1799 law called the Logan Act prohibits Americans from communicating with foreign officials to influence an overseas government’s actions related to a conflict with the United States. No one has ever been successfully prosecuted under this law.)

This part of the indictment shows that prior to Trump’s inauguration, Flynn went beyond attempting to establish a modus vivendi with Moscow. He was secretly asking Kislyak for a favor. (Moscow did not oblige him in this instance.)

That is quite a picture. On October 7, 2016, the US intelligence community released a statement declaring that Russia was behind the hack-and-dump operation that targeted Democrats in order to influence the 2016 presidential campaign. (That statement also suggested that Russia had explored penetrating US vote-counting systems.) About two months earlier, Trump and Flynn had received an intelligence briefing that included information about Russia’s clandestine efforts to subvert the election. Yet during the transition, Flynn, as Trump’s representative, was covertly trying to enlist Moscow’s assistance to undermine existing US policy.

For Moscow, this request—and Flynn’s subsequent plea for a light response to Obama’s sanctions—certainly could be read as an encouraging sign and a signal that Trump was not upset about Vladimir Putin’s intervention in the campaign. Flynn was sending a clear message to Putin’s man in Washington that he and Trump were more interested in partnering with Russia than in holding it accountable—or preventing Putin from future attacks on elections in the United States or elsewhere.

That might not have been illegal. But as bad as it is to lie to the FBI, countenancing Russia’s assault on American democracy is a far graver offense.