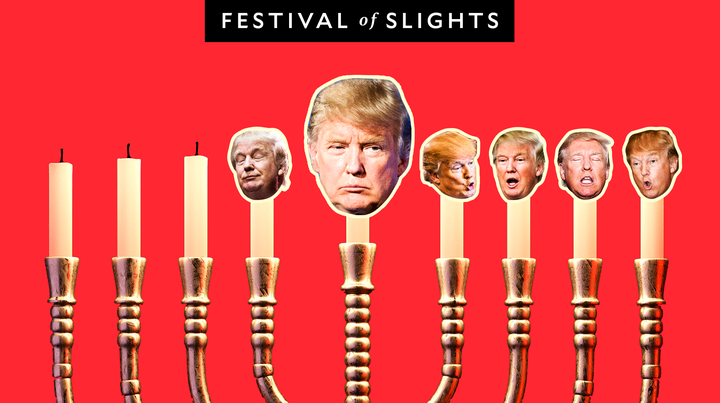 On the eve of the 2016 election, both Democratic candidate Hillary Clinton and Republican candidate Donald Trump released their “closing argument” ads.

Clinton’s was a direct-to-camera testimonial about how she wanted to “build a stronger and fairer America.”

Trump’s closing ad, on the other hand, was about…all the conniving Jews who run Wall Street, global finance, and most of what burdens the lives of regular Americans.

“The establishment has trillions of dollars at stake in this election,” Trump says. “For those who control the levers of power in Washington and for the global special interests, they partner with these people that don’t have your good in mind.”

The screen flashes images of noted Jewish financial puppet-masters George Soros and Janet Yellen before finally getting to Clinton—the Christian he was actually running against.

But that is not the end of the Jews on parade. Trump continues, “It’s a global power structure that is responsible for the economic decisions that have robbed our working class, stripped our country of its wealth and put that money into the pockets of a handful of large corporations and political entities.”

Our thoughts on the #Trump closing ad. pic.twitter.com/pPUmkY6qdD

The Trump campaign was quick to claim injured innocence, denying the ad had anything to do with Jews.

“The ADL should focus on real anti-Semitism and hatred, and not try to find any where none exist,” wrote the campaign’s Jason Greenblatt in a statement to CBS News. “I am offended and concerned that an institution such as the ADL would involve itself in partisan politics instead of focusing on its important mission.”

But it wasn’t just the ADL who considered the ad to be anti-Semitic. Here’s Daniel Marans writing for the Huffington Post:

Splicing the remarks together with images of Soros and Yellen, however, heightens this anti-Semitic effect. The combined use of the troubling rhetoric and images of those individuals resembles more explicitly anti-Semitic narratives throughout modern history. The Protocols of the Elders of Zion, a late 19th-century publication likely commissioned by the Tsarist Russian government, helped spread the conspiracy theory that a Jewish-run cabal of global financial elites dictated world affairs. Some version of this theory continues to inspire anti-Semites.

This is an anti-Semitic ad every bit as much as the infamous Jesse Helms ‘white hands’ ad or the Willie Horton ad were anti-African-American racist ads. Which is to say, really anti-Semitic. You could even argue that it’s more so, given certain linguistic similarities with anti-Semitic propaganda from the 1930s. But it’s not a contest. This is an ad intended to appeal to anti-Semites and spread anti-Semitic ideas. That’s the only standard that really matters.

This is intentional and by design. It is no accident.

But the Trump campaign insisted this was not so, with campaign spokesman Jason Greenblatt telling CBS News:

Mr. Trump’s message and all of the behavior that I have witnessed over the two decades that I have known him have consistently been pro-Jewish and pro-Israel and accusations otherwise are completely off-base. The suggestion that the ad is anything else is completely false and uncalled for.

Many Trump supporters unaffiliated with the campaign joined the chorus. One interviewed by the Huffington Post speculated that the Trump speech on which the ad was based had been written by a Jewish adviser, declaring “Trump has certainly not run an anti-Semitic or anti-Zionist campaign.”

“That said,” the supporter continued, “any serious person, of the Right or Left, who honestly examines the financial and geopolitical power structure will, sooner or later, encounter the reality of Jewish power—and the Jewish identity of so many making up this structure.”

A little over two months later, Donald Trump was inaugurated president and in the protests that ensued that same supporter, white nationalist Richard Spencer, gained worldwide fame as “the Nazi who got punched.”

I made one of those Richard Spencer videos. pic.twitter.com/ToudvGAPhW