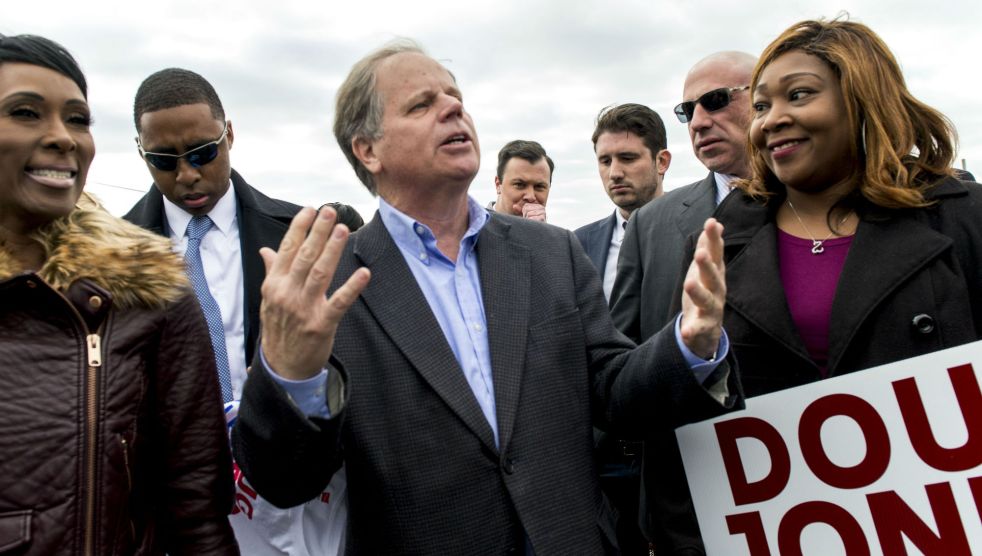 Democrat Doug Jones pulled off the upset of the year in Alabama’s special Senate election on Tuesday. But don’t expect to see him in the US Senate anytime soon.

First, the state of Alabama has to certify the election results, which could take several weeks. Senate Majority Leader Mitch McConnell (R-Ky.) told reporters this week that Sen. Luther Strange, the Alabama Republican currently in the seat, would remain there until the end of this year’s session, which could stretch until Christmas. (Strange, who was appointed to the seat after Jeff Sessions left to become attorney general, lost to Republican nominee Roy Moore in a primary this fall.)

What this means is that it’s highly unlikely Jones, whose election narrows the GOP majority to 51-49 in the Senate, will get to Congress before Republicans ram through their slapdash tax legislation. Democrats say Jones should be seated as soon as possible. “I call on Senate Majority Leader Mitch McConnell to listen to the people of Alabama and seat @GDouglasJones without any delay,” Sen. Elizabeth Warren (D-Mass.) tweeted Tuesday night.

Republicans, save for McConnell, have been silent on whether to seat Jones before the tax bill gets passed. But here’s the rub: When it was a Republican senator-elect waiting to be seated, and the consequential legislation under consideration in the Senate was Obamacare, conservatives howled over the delay in seating their new senator.

Look no further than Jay Sekulow, who now serves as one of President Donald Trump’s private attorneys. Writing a mere week after Massachusetts Republican Scott Brown’s stunning victory in the January 2010 special election to fill the late Ted Kennedy’s seat, Sekulow said it was “outrageous” that Brown had not yet been seated and allowed to participate in the health care debate:

Here’s the troubling reality: It’s been nearly one week now since Scott Brown was elected to the U.S. Senate by the voters of Massachusetts. And, Senator-elect Brown has not yet been seated. He is not yet a member of the U.S. Senate and can’t participate on the work currently underway in the Senate itself.

In my view this is an unacceptable delay tactic on the part of the Senate leadership a tactic that disenfranchises the voters of Massachusetts who sent a strong message in the election of last week.

Theres absolutely no reason to wait to seat Senator-elect Brown and with each passing day he is prevented from participating in the legislative process. This delay tactic along with reports that top Democrats continue to plot passage of health care reform show that its business as usual in Washington ignoring the will of Massachusetts voters and moving forward with a disturbing health care plan that America simply does not want.

No word yet on whether Sekulow supports Jones’ immediate seating in time to weigh in on the GOP tax bill now barreling toward passage.

Democrats, for their part, showed some restraint when it came to Brown, whom Trump named ambassador to New Zealand and Samoa this year. Then-Majority Leader Harry Reid said after Brown’s victory that the Senate wouldn’t proceed further on health care until Brown had taken his seat. “We’re going to wait until the new senator arrives,” Reid said, “before we do anything more on health care.”

Reid’s comments owed more to the political shockwaves caused by Brown’s election than any courtesy on Reid’s part. That said, it doesn’t look as though McConnell will extend the same modicum of courtesy to Jones.