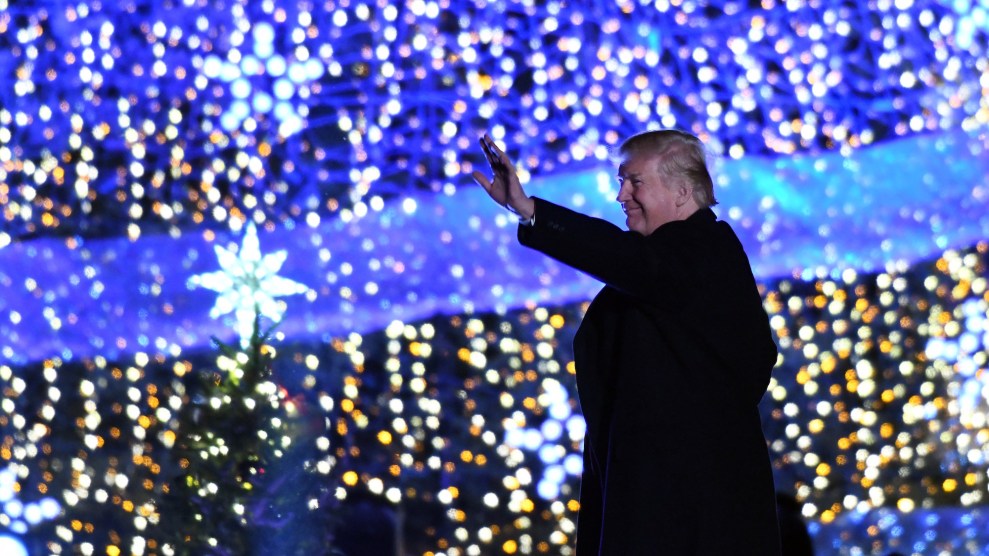 In a commencement speech years ago, author David Foster Wallace told this story: Two young fish are swimming along, and they pass an older fish swimming the other way. The older fish says, “Morning, boys, how’s the water?” The two young fish swim on for a while. Then one looks at the other and says, “What the hell is water?” Wallace noted the point of the story was that “the most obvious, ubiquitous, important realities are often the ones that are the hardest to see and talk about.” And that may describe American politics at the moment. President Donald Trump has brought about a profound crisis that is undermining the nation’s democratic system, and it is so pervasive and encompassing that it is not being fully acknowledged. It is the water.

The crisis is not rooted in Trump’s advocacy of conservative policies—the Muslim ban, tax breaks for the wealthy, hollowing out the State Department, killing climate change action. Nor is it triggered by his rude and classless behavior, as he spends long hours watching cable news, consuming Diet Coke, and rushing to Twitter to attend to petty grievances, instead of working diligently to advance the interests of the citizenry. The country can survive bad policies and an immature and erratic commander in chief (unless, of course, his recklessness leads to nuclear war). What the United States faces this holiday season is an unparalleled, widespread, Trump-inspired assault on the principles, norms, and purpose of democratic governance.

Creeping authoritarianism, creeping autocracy, creeping kleptocracy—call it what you want. But the creep has turned into a sprint. The offenses to good government and fundamental values are happening each day, often several times a day—and in such a fusillade that there is often not enough time to ponder the horrendous implications of each one. And not enough space to consider the fundamental deterioration under way. Another aquatic metaphor: We are too busy being slammed by what’s coming out of the fire hose to see the water damage that is being done.

In recent days—like any set of recent days—the outrages have been many. During a phone call with Vladimir Putin, Trump, according to a White House “readout,” thanked the Russian leader “for acknowledging America’s strong economic performance in his annual press conference.” And they discussed working together to “resolve the very dangerous situation in North Korea.” Apparently they spoke not a word about Russia’s attack on the United States during the 2016 campaign. Which seems to be the pattern. Since Trump took office, there has not been a single sign he has pressed Putin regarding Moscow’s operation to subvert American democracy. And as a much-noticed Washington Post piece pointed out, Trump has throughout the last year adamantly refused to accept the intelligence community’s assessment that Russia engaged in information warfare to help him win the presidency—and has taken no measures to prevent a rerun. So here we have an American president abdicating—out of pique—his most fundamental obligation: to protect the nation from foreign attack. And his party colleagues barely bat an eye at Trump’s negligence.

If a dogcatcher refused to catch dogs, he would be deemed unfit for the position. But Trump has abdicated the top responsibility of the commander in chief, and this does not scandalize the congressional majority. The Constitution awards power to the president so he can safeguard the nation. Trump uses this power to safeguard his own power.

Trump’s reckless disregard for norms and rules has been embraced by his champions and foot soldiers. Claiming to be a law-and-order sort of guy, he has viciously attacked law enforcement that might affect him and his cronies. Angered by the ongoing FBI investigation of the Trump-Russia scandal, he claimed the bureau is “in tatters.” And Fox News, a for-profit state news organ, dutifully puts on air a conservative activist who compares the current FBI to the KGB and essentially calls for the entire bureau to be shut down. (About a year ago, Trump equated the US intelligence community with Nazi Germany.) Others on and off Fox cheer for Trump to become a strongman leader who readily dispatches his perceived enemies. Though Michael Flynn has pleaded guilty to lying to the FBI, Trump’s minions still rally to the cry of “Lock Her Up” and demonstrate their belief that extremism in the name of defending Trump is no vice. It’s not just party over country; it’s Trump over party over country.

Trump and his comrades regularly assault the institutions of government that can impose a check on a president. Trump dismissed FBI chief James Comey in an attempt to protect himself. And Trump’s congressional allies in the past weeks have intensified their criticisms of special counsel Robert Mueller, devoting far more vitriol to his investigation than to Putin’s secret war on a US election. The same folks who were fine with over a dozen Benghazi inquiries now look to undermine a duly authorized probe—led by a Republican!—that threatens to reveal truths inconvenient for the president. And they are eager to shutter or distract the congressional investigations that are supposed to deliver to the public the truth about the 2016 campaign. These GOPers are joining Trump in embracing political power instead of principle and, like the president, making it easier for a foreign foe to assault the United States and then escape consequences. This is a violation of their oath of office, and they don’t care.

Meanwhile, special interests run amok on Capitol Hill, writing a tax bill that is jammed through Congress without true and serious deliberation. There is a recklessness driving this process that is encouraged by Trump. Debate, discourse, expertise—none of it matters. All that counts is raw power. There is no respect for orderly and thoughtful consideration. Citizen participation is of no significance. The rich win in this huge, bottom-to-top wealth transfer, as corporate lobbyists wield more influence than economic experts and members of the minority party. The tax bill will directly reward legislators pushing for it—and Trump and his family. (A reminder: Trump still has not followed a decades-old practice of presidential candidates and presidents releasing their tax returns.) And Ivanka Trump complains that the Democrats just don’t have the guts to join in the pillaging. This is absolute and raw class warfare. And as tax breaks are awarded to the well-heeled, the Children’s Health Insurance Program withers and millions of young Americans lose access to medical care. Arrogance is in the air. The driving message: We can do this…because we can.

There is much else going on that tears at the fabric of decent and honest government. Ethics guidelines are routinely and casually flouted by Trump officials (and relatives). The message is clear: rules are for others. Inexperienced people are placed in important jobs (and judgeships), and entire departments are hollowed out. Agencies are instructed to ignore science and facts—meaning, reality. The goal is obvious: diminish the reputation of government and its ability to serve the public. The swamp has grown deeper and wider.

The Christmas lights are shining, but these are dark days. Trump’s list of legislative accomplishments is short. His coattails are also short at the moment. But his malicious soul has spread through the executive branch he commands, infected the judicial branch he fills, and captured the party that controls the legislative branch. And this soul does not recognize the fundamental values that are supposed to guide the government: accountability and public interest. His basic view is evident: l’état, c’est Trump. And too many people in his party have accepted this and enabled him.

If Trump tries to fire Mueller or orders a reckless attack on North Korea, it will be obvious that a crisis is at hand. But a (relatively) quiet crisis has taken hold: Trump and his comrades are seeking to empower themselves and supplanting national priorities with self-serving and self-enriching ones, while delegitimizing those components of government they cannot use for their own ends or that would check their own prerogatives. This corrosion is happening bit by bit every day—as the flashpoint outrages (that is, Trump’s tweets) come and go at hyper-speed and suck up our collective attention. David Foster Wallace’s fish may not be able to tell they are swimming within water. But if that water becomes polluted and depleted of oxygen, at some point they damn well will notice. Trump has poisoned the civic sphere of America, and this crisis will continue to deepen until his contagion is widely viewed as what it is: a threat to the nation.