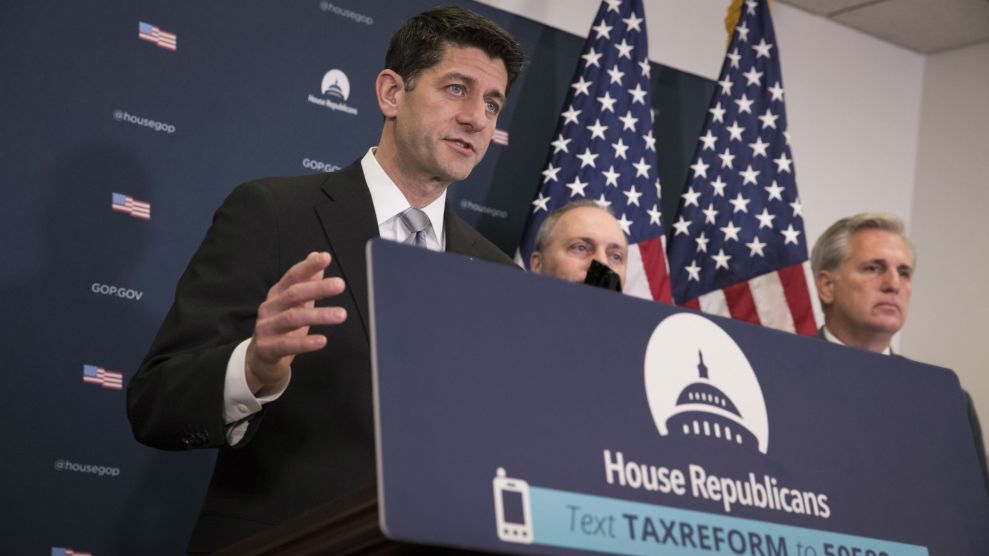 Let’s get one thing out of the way: Very few Americans want or even understand the sweeping tax bill Republicans are right now conspiring to ram through Congress.

The bill has never polled particularly well and it’s not getting better (perhaps because the bill’s biggest beneficiaries appear to be the very wealthiest Americans and faceless multinational corporations.) Just shy of 3 in 10 Americans said they supported the legislation in a new poll by Quinnipiac University. Gallup recently found the same anemic level of support. After crunching historic polling data, FiveThirtyEight concluded the GOP’s bête noire bill ranks as the least popular piece of major tax legislation to move through Congress in the last 35 years.

Yet Republican leaders in Washington show no sign of slowing down. Not even sloppily drafted bill language or glaring mistakes in the text have gotten in the way of Speaker Paul Ryan’s and Senate Majority Leader Mitch McConnell’s mad dash to ram the bill through. Senate Democrats learned about the GOP’s last-minute amendments to the bill not from their own colleagues, but from a lobbyist. They received the final 479-page bill, complete with handwritten changes in the margins, only hours before voting on it—that’s how backward the process has been in the chamber that likes to call itself the world’s greatest deliberative body.

What explains the Republican Party’s reckless rush to pass this bill?

It boils down to two words: Citizens United.

Citizens United is of course the 2010 Supreme Court decision that said it was unconstitutional to ban corporations and labor unions from spending unlimited amounts of money in elections. That decision and several subsequent court rulings have unleashed a tidal wave of campaign spending by outside players like super-PACs and dark-money nonprofits. When I say that Citizens United explains the GOP’s tax-bill frenzy, I really mean the big-money political climate that Citizens United helped create and, broadly speaking, embodies.

The funders behind today’s super-PACs and dark-money groups—think the Koch brothers and the Mercers on the right, mogul Haim Saban and financier-activist Tom Steyer on the left—now exert tremendous influence over our political system. They’ve shifted the center of gravity toward outside institutions and away from the Democratic and Republican parties. “The consequence of the Citizens United decision is it has created a market for political spending that is outside a candidate or party structure and made American politics more extreme,” says Steve Schmidt, a Republican consultant and pundit who advised Sen. John McCain on his 2008 presidential campaign. “That big money is enforcing discipline on a single-issue basis.”

When a donor such as casino mogul Sheldon Adelson can cut a $20 million check that reshapes a primary race, it follows that elected officials are responsive to the demands and ideas of those deep-pocketed funders. In this case, as the end of 2017 approached, Republican donors were fuming at the inability of the Republican-led Congress to get anything done. Those donors were vowing to sit on their checkbooks until lawmakers notched a victory, like the new tax bill.

Dan Eberhart, a prominent GOP donor and fundraiser who runs an oil drilling services company, echoed Miller’s frustration. “I don’t know why donors should give to the NRSC until tax reform is passed,” he told Mother Jones. “Thanks for [Supreme Court Justice Neil] Gorsuch, but you haven’t otherwise used the majority.” You can easily see the thinly veiled threat in this statement made by another major GOP funder, Dan Deason, about the pending tax bill. “If they get this done—especially if it has the repeal mandate on [the Affordable Care Act]—then yeah, we’ll be very supportive of incumbent senators,” Deason told Fortune.

In the Citizens United era, lawmakers on both sides of the aisle are well attuned to these kinds of threats. Eberhart said he got phone calls from four different Republican senators after he went public with his criticisms of the GOP-led Congress. But you don’t have to go on Eberhart’s word alone: Republican lawmakers themselves have fretted publicly about what their donors will think if they fail to pass a major piece of legislation this year like the tax bill.

Last month, Rep. Chris Collins (R-N.Y.) told the Hill: “My donors are basically saying, ‘Get it done or don’t ever call me again.'”

Sen. Lindsey Graham (R-S.C.) laid out a dire scenario if the tax bill failed: “The party fractures, most incumbents in 2018 will get a severe primary challenge, a lot of them will probably lose, the base will fracture, the financial contributions will stop, other than that it’ll be fine!”

Norm Ornstein, an expert on US politics and Congress at the American Enterprise Institute, says that how the tax bill was written and how it has moved through Congress is a testament to the influence of the donor class. Ornstein points to goodies like tax breaks for hedge fund managers and lower rates for pass-through corporations as clear evidence that the tax bill was written with the intent of winning over wealthy contributors. He describes the bill as “a great big wet kiss—and in this case, not one that was uninvited—to big donors.”

Schmidt, the Republican consultant, says the clout of donors has warped the legislative process to the point that Republicans are eager to champion a piece of legislation with dismal public support because it meets the demand of their wealthiest donors and fundraisers. “There’s not even a pretext anymore about trying to make legislation popular,” he says.

Of course, Citizens United and the clout of big donors isn’t the only driving force behind the GOP tax bill. You have to factor in the Republican Party’s unyielding belief in supply-side or “trickle down” economics (despite all evidence to the contrary). There’s also the Trojan horse theory—that Republicans want to use the trillion-dollar deficit created by the tax bill as an excuse to shrink Social Security, Medicare, and Medicaid, a scenario already outlined by several GOP lawmakers.

But when you look at both the substance of the tax bill and the unprecedented way in which Republican leaders have gone about ramming through legislation with the potential to reshape large swaths of the American economy, it’s hard not to see the influence of our free-for-all campaign money system, says Norm Ornstein.

“The rush to do this bill, the unwillingness to reach out to Democrats who were eager to help with the bill, and the way in which they did this,” Ornstein says, “cutting corners in the process, completely ignoring all experts including the Congress’ own Joint Tax Committee—all of that speaks to something that mollifies the donors.”