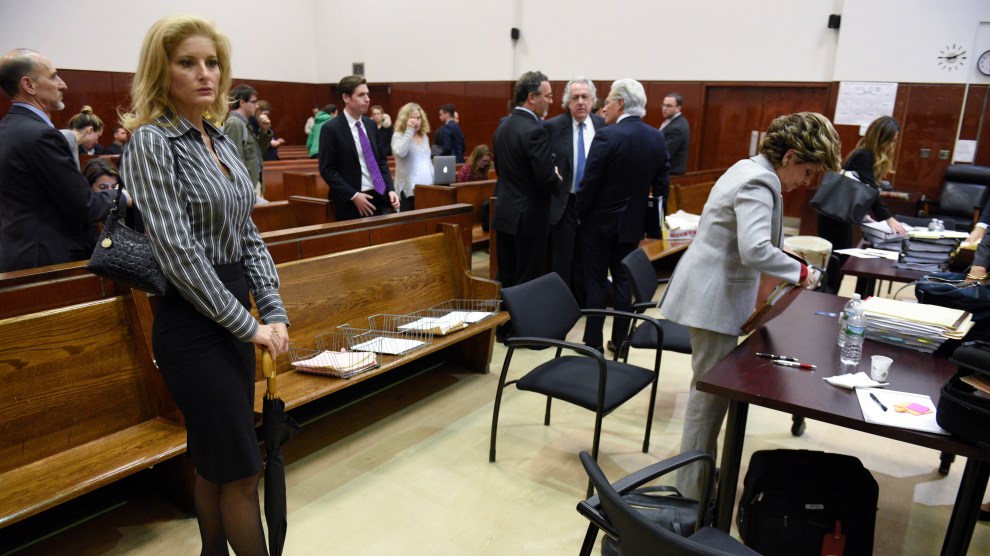 Can the president be sued? It’s a question that the Supreme Court answered 20 years ago with a resounding yes, in a 9-0 decision allowing Paula Jones to move forward with her sexual harassment lawsuit against President Bill Clinton. But President Donald Trump is currently trying to duck a lawsuit brought by Summer Zervos, a former Apprentice contestant who last year accused Trump of sexual misconduct. She alleged that Trump had kissed her on the mouth in New York, against her will, and that he kissed and groped her in a California hotel room during a business meeting in 2007.

Zervos filed a defamation suit against Trump after he publicly ridiculed her sexual misconduct allegations and suggested she’d made up her story. Trump’s lawyer has argued in legal filings and in a hearing last week that the president is immune to such lawsuits. But thanks to the husband of presidential adviser Kellyanne Conway, Trump is likely to lose that argument.

Here’s why, as we explained last year:

In 1994, Jones—who was among a group of Bill Clinton accusers Trump assembled at a press conference before the second presidential debate—sued then-President Clinton for sexual harassment. Ann Coulter, a major supporter of Trump’s presidential bid, was reportedly the ghostwriter of Jones’ legal complaint. Clinton tried to fend off the suit by asserting presidential immunity, which protects the president from lawsuits over conduct while in office. But Jones argued that her case involved actions that had occurred before Clinton took office. Jones’ lawsuit resulted in a 1997 Supreme Court decision in her favor that now ensures that all the civil suits currently pending against Trump—and any that may yet be filed concerning his business or private life—can go forward while he’s in office. Because of this ruling, Trump can be forced to testify, produce evidence, submit to depositions, and ultimately pay judgments in cases he loses.

Jones’ Supreme Court victory was due in part to the work of George Conway III, a Republican lawyer who is married to Trump’s campaign manager, Kellyanne Conway. When Jones’ case first became public in May 1994, Conway was a 30-something lawyer at the law firm Wachtell, Lipton, Rosen & Katz and a member of the Federalist Society, a conservative legal group. Conway penned an op-ed in the Los Angeles Times arguing that Clinton was relying on dubious legal arguments. “In a case involving his private conduct, a President should be treated like any private citizen,” he wrote. “The rule of law requires no more—and no less.”

In 1996, the 8th Circuit Court of Appeals ruled that the case should move forward, saying that it could find no “case in which any public official ever has been granted any immunity from suit for his unofficial acts.” Clinton appealed the decision, asking the Supreme Court to delay the trial until after he left office. Conway wrote the Supreme Court brief for Jones. In a unanimous decision written by liberal Justice John Paul Stevens, the court agreed with Conway, and the Jones case proceeded. Clinton was subsequently forced to submit to hours of depositions in the case—a first for a sitting president. Jones ultimately settled with Clinton for $850,000.

The Zervos case is different from Clinton v. Jones, which the Supreme Court decided in 1997 in Jones’ favor, in one small way: It’s pending in New York state court rather than federal court, where the Jones case was filed. Trump’s lawyer, Marc Kasowitz, has seized on this fact as the reason that Trump can’t be sued. He claims that the Supremacy Clause of the Constitution prevents the state court from having jurisdiction over the president that Trump is thus immune from Zervos’ suit. He told Judge Jennifer Schecter in a hearing last week on Trump’s motion to dismiss that a “state court can’t exercise any control over the president under any circumstances.”

But lawyers who supported Jones’ successful argument in the Supreme Court say that’s nonsense. Stephen Burbank, a University of Pennsylvania law professor, was one of three law professors who filed a brief on Jones’ behalf in the 1990s and have now filed a similar one in the Zervos case. He and his colleagues argue that the core issue is the same regardless of which court the civil suit is filed in: that no man is above the law.

As with Clinton’s alleged harassment of Jones, Trump’s alleged groping of Zervos occurred before he was president, so it’s not covered by laws that immunize the office of the president against suits over official acts. State courts, the law professors say, are just as capable of managing the civil suit as federal courts. The law professors’ brief argues that if Congress wanted to immunize the president from civil suits such as Zervos’, it could, but it’s declined to do so, even after the impeachment spectacle that followed Clinton v. Jones. The lack of congressional action suggests that the idea that the president is still accountable for his actions prior to taking office is a bipartisan one.

The professor argue in their brief that the only real issue before Judge Schecter, who’s currently considering Trump’s request to dismiss the case, is whether Zervos’ suit would require the state court to exercise too much control over the president, such as by demanding his presence at certain times, in a way that would violate the Constitution. Trump’s lawyers have insisted that the president is too important—more important even than Clinton was—and too busy to be bothered with what they see as a frivolous and politically motivated suit. In a motion to dismiss, Trump’s lawyers write, “the public and governmental concerns occupying the President’s time are far greater here than they were in Clinton v. Jones.”

But that case could again hurt his argument. After all, Clinton was deposed in the Jones case and the world did not come to an end. Trump’s four-hour-a-day TV-watching habit and regular weekends of golf also undermine his assertion that he’s too busy to respond to the suit. Burbank says accommodations could be made to ensure that the litigation is not too onerous for Trump. Indeed, Mariann Wang, Zervos’ attorney, told Schecter in a hearing last week that her client would be flexible. “We can take a deposition down to Mar-a-Lago in between him going to play golf,” she said.

Of course, because the case could establish a legal precedent, it can’t really be decided on the basis of Trump’s golfing schedule. “The law presumably should be predicated on a normal president,” Burbank says. Ultimately, it’s likely to be heard once again by the Supreme Court, after making its way through various appeals in New York. The high court’s makeup has changed since 1997, so there’s no telling how it might rule, but for Trump it might not matter much. By the time the Supreme Court could resolve the case, “any claim of immunity may have gone away because he may be out of office,” Burbank says, and the suit could proceed accordingly.