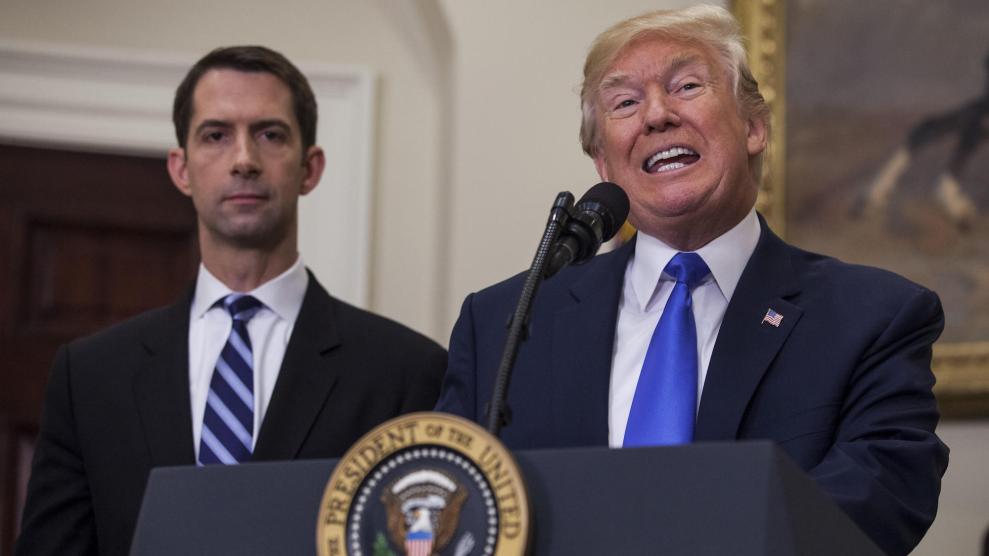 The White House is considering replacing Secretary of State Rex Tillerson with Central Intelligence Agency Director Mike Pompeo and giving Pompeo’s job to Sen. Tom Cotton, an Arkansas Republican, the New York Times reports. In Cotton, who reportedly wants the CIA job, President Donald Trump would install at the intelligence agency one of the most vocal supporters of his efforts to dismiss the Trump campaign’s suspected collaboration with the Kremlin in an effort to interfere in the 2016 election.

Trump has frequently clashed with the intelligence community, which concluded that Russia was behind various efforts to meddle in the election. The president has dismissed these findings and continually cast doubt on Russian involvement. Cotton has repeatedly leapt to defend Trump administration officials over their contacts with Russians.

After the Washington Post reported in March that Attorney General Sessions had made false statements under oath in testifying that he had had no contacts with Russian officials during the presidential campaign, Cotton took aim at Democrats who criticized Sessions. He pretended that Democrats had faulted Sessions for holding the meetings rather than for offering inaccurate testimony. “There’s no scandal in a senator meeting an ambassador, which happens all the time,” Cotton said. “I’m disappointed the Democrats are distorting the facts to impugn Attorney General Sessions’s character.”

When news emerged that Trump’s son-in-law and senior aide Jared Kushner had met secretly with Russian Ambassador Sergey Kislyak during the presidential transition and attempted to set up a backchannel to communicate with the Kremlin, Cotton defended Kushner. “That is a very normal activity during any kind of transition,” Cotton told CNN in April, ignoring Kushner’s failure to disclose the meeting and other contacts with Russian officials in his application for a security clearance. “Ambassadors and foreign ministers and heads of states from across the world, of course, are reaching out to try to a contact a president-elect and his close advisers.”

Cotton broadened his defense to cover undisclosed meetings involving other Trump aides, such as former National Security Adviser Michael Flynn, who was fired for lying about his contacts with Kislyak. “The simple fact that Trump advisers were meeting with foreign officials during the transition does not to me raise any concern whatsoever, whether they’re Russian or Chinese or from any other country,” Cotton said.

Russians emissaries who communicated with the Trump campaign and transition officials consistently advocated for the repeal of sanctions imposed by President Barack Obama. Trump has unsuccessfully pushed to roll back those sanctions on Russia and has frequently called for improving relations with Moscow.

Cotton has repeatedly leapt to defend Trump administration officials over their contacts with Russians.

But Cotton has pushed the notion that Trump is tougher on Russia than Obama was. “President Trump has appointed members to his Cabinet, and they’ve made deliberate statements that have been tougher on Russia than anything President Obama ever did,” Cotton said in March on Fox News. Cotton argued that Obama’s efforts to curtail growth in defense spending, his nuclear deal with Iran, and his administration’s regulation of oil and gas development amounted to a “pro-Russia” policy. “That’s not Donald Trump’s policy,” Cotton said.

In the same interview, Cotton disputed a New York Times report that Trump associates were being investigated for repeated and extensive contacts with Russian intelligence officials. “You should not trust media sources or media reports based on anonymous sources,” Cotton said. The Times report has been largely validated by subsequent developments, including the guilty plea of Trump campaign aide George Papadopoulos, congressional testimony of campaign adviser Carter Page, and revelations that former Trump campaign chairman Paul Manafort had maintained communications with a Russian oligarch close to Russian President Vladimir Putin.

Cotton has also disputed evidence of Trump’s efforts to derail the FBI’s investigation into his aides. Cotton dismissed memos by fired FBI Director James Comey, which described Trump’s pressure on Comey to stop investigating Flynn, as unreliable. “The accounts of these memos he allegedly wrote would be at least triple hearsay: what Donald Trump said, according to Jim Comey, according to someone who saw the memo, according to the New York Times reporter who had it read to him, didn’t even read it,” Cotton said on the Hugh Hewitt Show.

Cotton has even suggested that the so-called Steele dossier, a set of memos by a former British intelligence agent detailing Russian efforts to obtain influence over Trump and his associates, could have been funded by “Russian intelligence.” Fusion GPS, the firm that hired Steele to research Trump’s Russia ties, was paid by a conservative publication and later by Hillary Clinton’s campaign for the research. The company had previously worked for a law firm that represented a holding company owned by a Russian billionaire. Cotton’s conflation of the firm’s clients was part of an effort by Trump backers to confuse the origin of Steele’s findings, which the FBI and former Obama administration officials reportedly found mostly credible.

Rejection of the intelligence community’s conclusions might be standard operating procedure for Trump partisans. It would take on a different significance coming from the head of the CIA.