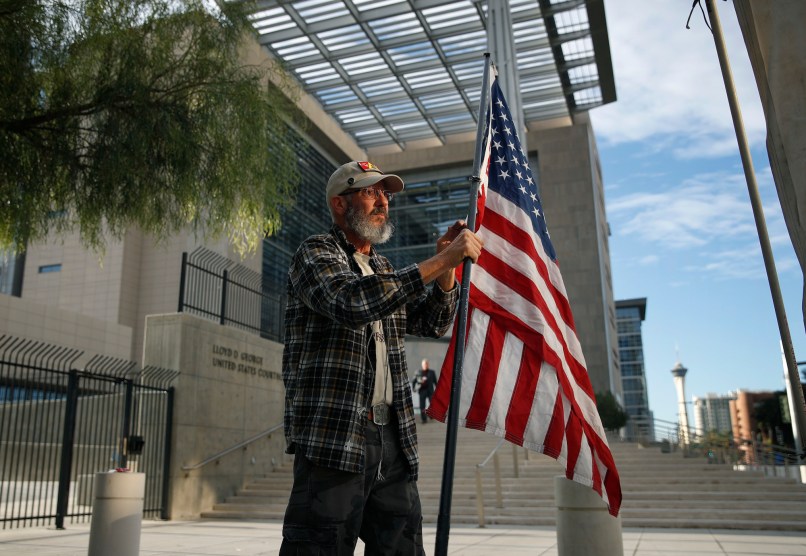 Nevada rancher Cliven Bundy and his supporters have long alleged that the federal government has committed serious misconduct in its prosecution of them over their 2014 armed standoff with federal officers attempting to impound Bundy’s cattle. On Tuesday, they made some headway with that argument in court, succeeding in once again delaying their trial on federal conspiracy and weapons charges over allegations that prosecutors have withheld critical evidence in the case.

Opening statements in the federal criminal trial of Bundy, two of his sons, and a Montana militia coordinator named Ryan Payne were supposed to kick off Tuesday morning, after months of delay. But the trial has been pushed back to next week, after lawyers for the defense asked the judge to dismiss the case, alleging that prosecutors have refused to turn over evidence from a surveillance camera that was trained on the Bundy ranch during the standoff.

Although preliminary proceedings in the Bundy case have been going on for months, the existence of the surveillance camera wasn’t disclosed until an evidentiary hearing on Friday, thanks to questioning from an unlikely source: Bundy’s son Ryan, who is representing himself. Prosecutors are required to turn over evidence that might help the defense. Failing to do so is a serious violation of court rules. If a judge finds that such a violation would have significantly altered the course of the trial, she can take a range of actions, from suppressing the evidence to dismissing the case—which is what Cliven Bundy’s lawyer has asked for.

Ryan Bundy first raised the issue of surveillance camera footage near the ranch back in August, in a motion requesting that the judge compel the government to “produce discovery regarding photographic and laser equipment used to surveil the Bundy home and American People who peaceably asembled [sic], between March 26, 2014 and April 12, 2014.”

The motion included an affidavit filed by Ryan Bundy alleging that he’d seen “a mysterious device” on the hill overlooking the Bundy home. He wrote:

Ryan Bundy was hit by a car at the age of seven and has severe nerve damage to the left side of his face that affects his speech. But he clearly and compellingly told the judge Tuesday that, rather than produce the materials he’d requested, prosecutors had “mocked” him in responding to his motion. And indeed they did, even making fun of his spelling mistakes.

Acting US Attorney Steve Myhre wrote that Bundy’s motion “appears to be little more than a fantastical fishing expedition for evidence justifying attacking law enforcement officers because he did not like the way they dressed while enforcing court orders. In essence, his motion is another attempt at jury nullification.”

A magistrate judge denied Bundy’s motion on the grounds that he hadn’t followed procedural rules, and Bundy failed to appeal the decision. Dressed smartly in a three-piece suit (unlike his father and brother Ammon, who showed up in court in red prison jumpsuits), he explained on Tuesday that he had great difficult representing himself from a jail cell, where he doesn’t have the same resources as a lawyer. “I can’t keep up with the back and forth,” he lamented.

But Bundy is now getting the last laugh. As it turns out, he was right about the existence of the surveillance camera. Last Friday, during an evidentiary hearing, he questioned National Park Service ranger Mary Hinson about it, and she confirmed for the first time that the FBI had indeed set up such a camera aimed the Bundy ranch. She’d watched footage from it on a TV screen inside the Bureau of Land Management’s command center for about four days, she said. She didn’t know whether the footage was recorded or simply disappeared as the live feed moved forward. That question, over the possible existence of a recording, is what’s now holding up the opening statements in the trial.

Cliven Bundy’s attorney, Bret Whipple, told the judge Tuesday that the case should not go forward until the recording issue is resolved. “I cannot be effective if there is live-feed video of the Bundy ranch and I don’t have it,” he told Chief US District Court Judge Gloria Navarro.

In response, Myrhe insisted that the government had turned over all video footage that the defense was legally entitled to and that he did not believe there was a recording of the surveillance of the Bundy residence. He said the camera in question was knocked over and broken shortly after it was installed. Brenda Weskler, the federal public defender representing defendant Ryan Payne, objected, noting, “We have hundreds of hours of cows being recorded.” She was skeptical that the government wouldn’t have kept video surveillance of the Bundy house.

The Bundys have been trying for more than a year to get Navarro kicked off their case, alleging among other things that she’s biased against Cliven Bundy and was appointed by President Barack Obama, who they argue believes Bundy and his supporters are “domestic terrorists.” But on Tuesday, Navarro was sympathetic to the defense’s arguments about the surveillance camera. If the video exists and “has potentially useful information, the defense is entitled to it,” she said. “I’m not convinced it doesn’t exist.” Myhre protested that the video wouldn’t have any value as evidence in the case “or we would be using it ourselves.” To which Navarro quipped, “Unless it’s exculpatory.”

In a striking victory for the Bundys, Navarro sent the jury home for the week and has given the government until Wednesday afternoon to come up with proof that the video doesn’t exist. She’ll hold a hearing on the evidence at that time. She told the assembled lawyers that the issue hadn’t been settled in a way that would allow her to “make a decision I can sleep with.”