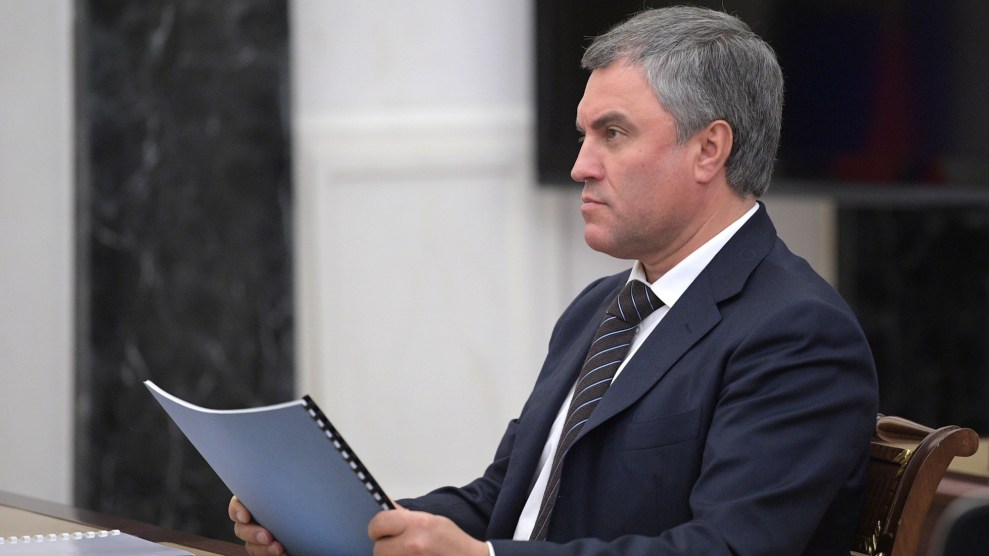 Vyacheslav Volodin, the chairman of Russia’s State Duma, said Russian legislators will amend a law related to foreign agents to include foreign media. Volodin, a former Putin aide, said the Duma could adopt the new legislation as soon as next week, according to news reports. “Since such decisions are being made in the United States in relation to our television companies, it is right for us to respond to these actions,” Volodin said, according to Radio Free Europe/Radio Liberty.

RT, formerly Russia Today, said Thursday in a statement posted on its website that the DOJ threatened to freeze its bank accounts and arrest its top US executive if it fails to register by Monday under Foreign Agents Registration Act (FARA), a law that requires representatives of foreign governments to disclose information, such as employees’ contacts with government officials and political donations, in publicly available filings to the department.

The FBI has reportedly investigated whether RT and Sputnik, another Russian state-backed news organization that operates in the United States, function as propaganda arms for the Kremlin. A US intelligence community report on Moscow’s interference in the 2016 presidential race concluded that Sputnik and RT were part of a Russian intelligence operation aimed at helping Donald Trump win the presidency. Spreading foreign governments’ views is legal, but the DOJ appears to believe that RT’s subservience to Russia requires it to register under FARA as a foreign agent working for the primary benefit of a foreign government. Most FARA filers are lobbyists or public relations firms working in the United States on behalf of other countries or foreign political parties. No other news organizations are registered under FARA.

RT’s editor-in-chief, Margarita Simonyan, said the organization will register but that it will also challenge the requirement in court. “We believe that the demand does not only go against the law, and we will prove it in court—the demand is discriminative, it contradicts both the democracy and freedom of speech principles,” Simonyan said. “It deprives us of fair competition with other international channels, which are not registered as foreign agents.”