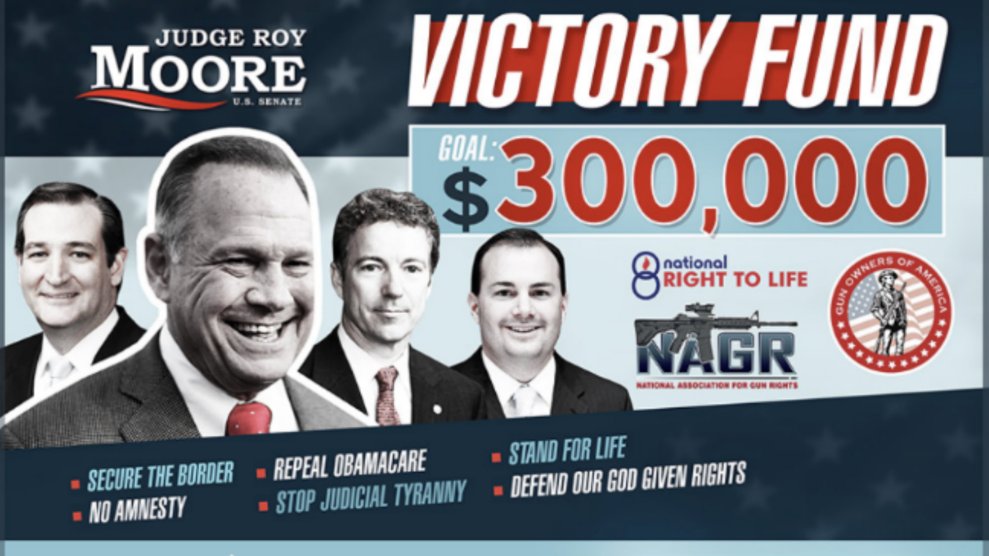 What does a political candidate do when a national newspaper publishes a story alleging that he initiated a sexual encounter with a 14-year old girl? In the case of Alabama Republican Senate candidate Roy Moore, the answer is: quickly send out a fundraising email touting endorsements from prominent Senate GOPers—even if one of those senators is now saying Moore may have to exit the race.

Less than two hours after the Washington Post published a major investigation reporting that Moore had pursued teenagers and sexually molested one under-age girl, his campaign zapped out a fundraising email that showcased endorsements from three senators whom conservatives tend to adore: Ted Cruz of Texas, Rand Paul of Kentucky, and Mike Lee of Utah.

“As you know, Rand Paul, Ted Cruz and Mike Lee all endorsed my campaign for U.S. Senate,” Moore wrote. “If I’m elected to Washington, I’ll join them on the frontlines of the fight to Drain the Swamp.” The email featured a graphic of all three hovering behind a grinning Moore.

But on Thursday afternoon, Lee was one of a growing number of Senate Republicans calling for Moore to step aside, if the allegations were true.

Sen. Mike Lee, one of very few Rs who endorsed Moore after the primary win: “If these allegations are true, Judge Moore should resign.”

Cruz endorsed Moore last month and declared that the former judge, a champion of the religious right, would “proudly defend Alabama values.” After the Post story hit, Cruz did not respond to a reporter asking about the allegations.

Sen. Ted Cruz, who also endorsed Moore, didn't respond to questions about the WaPo story as he walked into the Senate chamber.

Perhaps the email was already scheduled to go out this afternoon. But the timing raised the possibility that Moore was trying to make the best of these endorsements while he still could—that is, before these endorsers jump his scandal-struck ship.