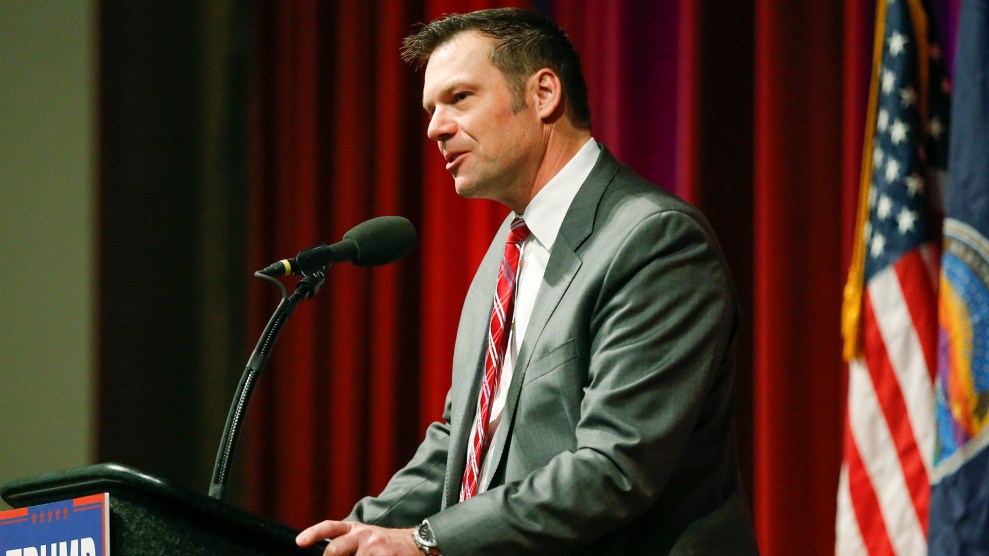 Kris Kobach speaks at a rally for Donald Trump in Wichita, Kansas, on March 5, 2016. Fernando Salazar/The Wichita Eagle via AP

Donald Trump Jr. may be under fire for seeking damaging information on Hillary Clinton from Russian sources and coordinating with WikiLeaks, but the Trump brand remains relatively strong in Kansas. And so on Tuesday, he’s heading there to lend his clout to a fundraiser for Republican gubernatorial candidate Kris Kobach.

It makes sense that Trump Jr. would seek to help Kobach, who is Kansas’ current secretary of state but is best known as the vice chair of President Donald Trump’s election integrity commission. During his controversial tenure in that role, he has made clear that he wants to replicate voting restrictions he’s implemented in Kansas on a national scale. But as Kobach turns his focus back to Kansas, a look at his track record there highlights a problem with his push to use his statewide achievements as a model: They’re in complete turmoil. One has been struck down in court, another has yielded almost no results, and a third has been wildly inaccurate and raised major security concerns.

In 2013, Kansas implemented a law drafted by Kobach requiring people to show a birth certificate, passport, or naturalization papers to register to vote. The proof-of-citizenship law prevented 1 in 7 new voters from registering, nearly half of whom were under 30. A federal appeals court blocked a key part of the law last year after the ACLU challenged it, ruling that “there was an almost certain risk that thousands of otherwise qualified Kansans would be unable to vote in November.” After the election, Kobach drafted legislation that he shared with the Trump administration to allow states to require proof of citizenship for registration. He was later sanctioned by a federal court for telling the court that “no such document exists.”

Kobach has said that such laws were necessary because in Kansas “the illegal registration of alien voters has become pervasive,” and in 2015 he became the only secretary of state in the country with the power to personally prosecute voter fraud cases. Since then, Kobach’s office has convicted just nine people for illegal voting, out of 1.8 million registered voters in the state. Only one of them was a non-citizen. The other eight were citizens who voted in two different states, and most of them were over 60 years old, owned property in both places, and were confused about voting requirements.

To hunt for double voting, Kobach’s office administers the Interstate Voter Registration Crosscheck Program, which is used by 30 states to compare their voter rolls to flag any voters who are registered in multiple states and might be voting illegally. Kobach has cited the program as a model for Trump’s fraud commission. Crosscheck “illustrates how a successful multistate effort can be in enhancing the integrity of our elections and in keeping our voter rolls accurate,” he said at the first meeting of the commission in July.

But Crosscheck has been found to produce false matches 99 percent of the time. Academics from universities including Stanford, Harvard, Yale, and the University of Pennsylvania who studied Crosscheck found that purging the voter rolls based on the program “would eliminate more than 300 registrations used to cast a seemingly legitimate vote for every double vote prevented.” Because the program searches for double voting using only voters’ first and last names and dates of birth, it generates thousands of false matches, which make double voting seem far more common than it is and can cause people to be incorrectly taken off voter rolls and even wrongly prosecuted for illegal voting.

In addition to the program’s inaccuracy, Crosscheck has serious security flaws. It could easily be hacked because states are uploading voter data using a non-secure server, and election officials are exchanging the usernames and passwords to access the server over unsecured emails. “It’s completely vulnerable and wide open,” one security expert told me last month.

Trump’s election integrity commission has generated controversy from its inception, particularly after it requested extensive personal data on registered voters from every state. It is now the subject of 15 lawsuits, including one from a Democratic member of the commission, for allegedly violating a wide range of privacy and transparency laws.

Kansas is holding its election for governor next fall, and Kobach is seen as the front-runner for the Republican nomination. In addition to his work to tighten voting restrictions, Kobach made a national name for himself by drafting hard-line legislation to crack down on illegal immigration that was adopted by Arizona and Alabama.

Kobach befriended Trump through Trump Jr., whom he had met through a mutual friend. One year ago, Kobach met with the president-elect at his golf club in New Jersey, and they discussed “the problem of noncitizens voting illegally in US elections,” Kobach said in a court deposition. A week later, Trump tweeted that he would have won the popular vote if not for “the millions of people who voted illegally.” Trump then named Kobach vice chair of his voter fraud commission. A year later, neither Kobach nor Trump has produced any evidence to support Trump’s claim of widespread illegal voting.