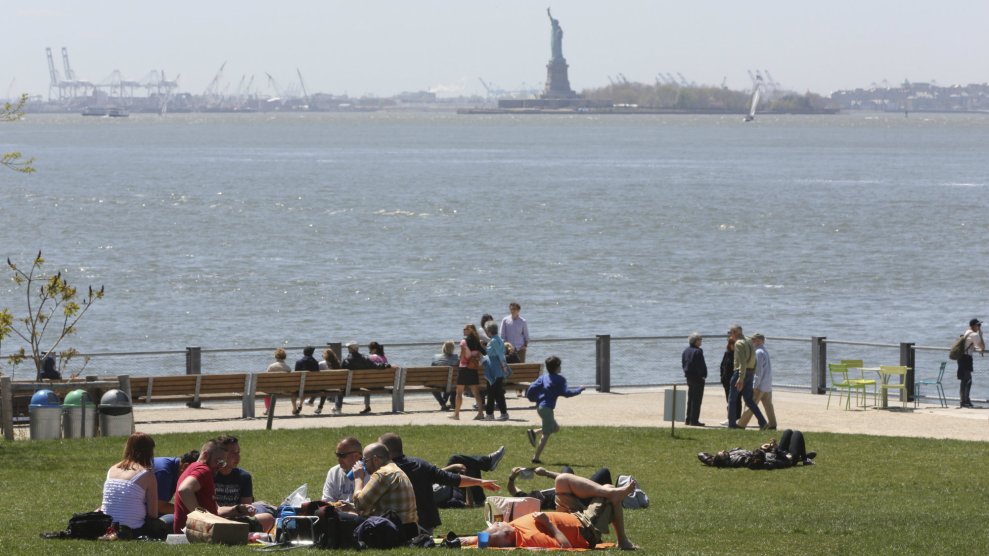 New York City’s parks are green oases amid glass, concrete, and steel. But though they feel transportive, they’re often not far away from the city’s edge—and particularly those parts of the city’s silhouette that are bordered by waves. Roughly half of the land managed by the NYC Parks Department is directly on the water. That proximity to the shoreline makes these blissful parcels especially vulnerable to flooding, storm surges, and other consequences of wild weather.

When Hurricane Sandy made disastrous landfall five years ago, the storm swamped 5,700 acres of the city’s parkland and spawned $800 million in damages. Is a city built on the shore destined to be full of soggy recreation spaces?

The Parks Department doesn’t think so. In a new set of guidelines, the agency is codifying best practices for designing landscapes to handle future onslaughts—which experts anticipate continuing to slam into the city.

The new guidelines, which are more blueprints than prescriptions, range from design suggestions to horticultural recommendations for beaches, boardwalks, playgrounds, esplanades, and more—all with the goal of buoying local ecosystems, warding off storm damage, and promoting resiliency. They’re both big-picture and nitty-gritty, said Sarah Neilson, the chief of policy and long-range planning at NYC Parks.

Some of the suggestions consider the very beginning of a park’s life, including where to situate it in the first place, and accounting for flood zones and potential inundations and erosion. (They get granular pretty quickly—one recommendation advocates for trough-style drinking fountains, which sidestep the problem of debris clogging the drain.) Once a park has already been constructed, the authors suggest that designers take a look at naturally resilient solutions to keep it healthy, such as wetlands and replenished dunes.

These sorts of solutions can confer major boons, said Nate Woiwode, North America Risk Reduction and Resilience Project Manager at The Nature Conservancy. One of Woiwode’s projects is the Naturally Resilient Communities initiative, which brings together a toolkit of strategies communities can use to improve their ability to weather storms without leaning so heavily on traditional gray infrastructure. Installing a feature such as a dune or marsh, he added, “is an investment in infrastructure much like a road or seawall.” Though Woiwode stressed that these types of projects “shine brightest” during smaller-scale, frequent events like nuisance flooding, he added that Sandy was an inflection point in terms of shifting public opinion about how helpful they can be. Wetlands and other nature-based infrastructure defanged Sandy’s bite by up to $625 million in the Northeast, according to a paper published this summer in Scientific Reports.

The shore was swamped by three feet of water twice during the storm. In some ways, the damage “was a blessing in a catastrophe.”

For Brooklyn Bridge Park, which was still under construction when Sandy swept the city, the storm was a test of the resiliency measures that had already been integrated into the design—and it offered guidance about what needed to be tinkered with. BBP, which operates as a private organization independent of the parks system, runs along the edge of the East River. The shore was swamped by three feet of water twice during the storm. In some ways, the damage “was a blessing in a catastrophe,” said Rebecca McMackin, the park’s director of horticulture. “We were able to learn a lot about park construction, planting, and best management practices for an event like that.”

Some of the design elements already in place from the get-go helped mitigate damage. Like other parks built atop piers, BBP’s shoreline initially retained historic bulkheads. When water crests into these walls with a lot of force, there’s little chance to soften the impact. When construction began on the park, large portions of these blockheads were in poor condition, said David Lowin, the park’s executive vice president. Instead of rebuilding them, the design team Michael Van Valkenburgh Associates installed a stone edge along much of the park to soften the blow. “As the waves hit it, it breaks up the force of the waves, and it does a lot less damage,” McMackin said. Bulkheads have also been ripped out at Bushwick Inlet Park, where the grounds are 85 percent permeable open space. Instead of clutching water, the riprap design also fosters drainage—as do boat launch ramps that invited water to swirl back out to the river, and salt marshes with cordgrass that absorb excess water and can “hold their own” without drowning in the downpour, BBP’s McMackin said. “The storm was a good case study for us in whether this really worked,” Lowin said. “And the answer we observed was that it absolutely did.”

The storm also nudged the designers to make some pivots, many of which are echoed in the NYC Parks’ guidelines. BBP is limited by the weight-bearing capacity of the piers, but wherever possible, the designers had raised the grade of the landscape, often using a material similar to Styrofoam to build up slopes without tacking on a lot of weight. It wasn’t quite enough. The designers put most of the root balls of the trees above the water level associated with 100-year-storms. Then Sandy bit harder than forecasters had predicted. Now, newly planted trees are elevated even higher—and they’re often different species than the ones that didn’t weather the storm so well.

London plane trees, ubiquitous across the boroughs, floundered in the barrage of salt water. As part of the Consortium of Coastal Parks, 15 public parks and gardens in the region—including the Parks Department—McMackin and her collaborators worked to compile a list of plants that proved to be able to handle the inundation. This information is helping to guide the planting scheme for the High Line’s next phase, which will be at ground-level, McMackin said.

Other suggestions include ideas for easily retrofitting parks, such as by swapping out playground structures with ones made from saltwater-resistant plastic, or replacing gravel walkways with pavers that are less likely to be flung around by water. These changes can be made in the course of regular upgrades, Neilson said, instead of whole-hog. Parks can also toy around with the idea of rolling out amenities that are easy to pack away as a storm approaches. The idea is to bake resilience thinking into the DNA of park design, she said, “without sacrificing a really quality park experience.”