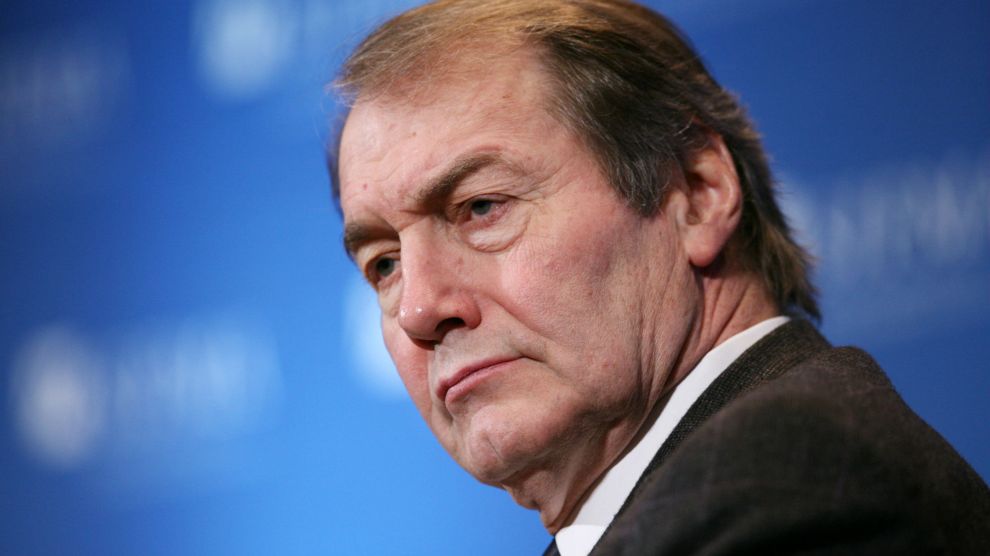 Update 6:10 p.m. EST: Charlie Rose has been suspended from his hosting duties on “CBS This Morning,” and PBS says it will immediately halt distribution of Rose’s program in response to the Washington Post report, according to the Associated Press.

“PBS was shocked to learn today of these deeply disturbing allegations,” PBS said in a statement. “PBS does not fund this nightly program or supervise its production, but we expect our producers to provide a workplace where people feel safe and are treated with dignity and respect.”

Longtime news anchor and television host Charlie Rose has been accused of sexual harassment by eight women, according to a new investigation by the Washington Post—the latest in a litany of sexual harassment allegations against men in the media and entertainment industries. The women had been employees at or had been interested in working on the Charlie Rose show; they described incidents from the late 1990s to 2011.

Most of the women said Rose alternated between fury and flattery in his interactions with them. Five described Rose putting his hand on their legs, sometimes their upper thigh, in what they perceived as a test to gauge their reactions. Two said that while they were working for Rose at his residences or were traveling with him on business, he emerged from the shower and walked naked in front of them. One said he groped her buttocks at a staff party.

Reah Bravo, one of Rose’s associate producers and a former intern on the show, said Rose made multiple unwanted sexual advances towards her. “It has taken 10 years and a fierce moment of cultural reckoning for me to understand these moments for what they were. He was a sexual predator, and I was his victim,” she said.

“It is essential that these women know I hear them and that I deeply apologize for my inappropriate behavior. I am greatly embarrassed,” Rose said in a statement to the Post. “I have behaved insensitively at times, and I accept responsibility for that, though I do not believe that all of these allegations are accurate. I always felt that I was pursuing shared feelings, even though I now realize I was mistaken. I have learned a great deal as a result of these events, and I hope others will too.”

“All of us, including me, are coming to a newer and deeper recognition of the pain caused by conduct in the past, and have come to a profound new respect for women and their lives.”