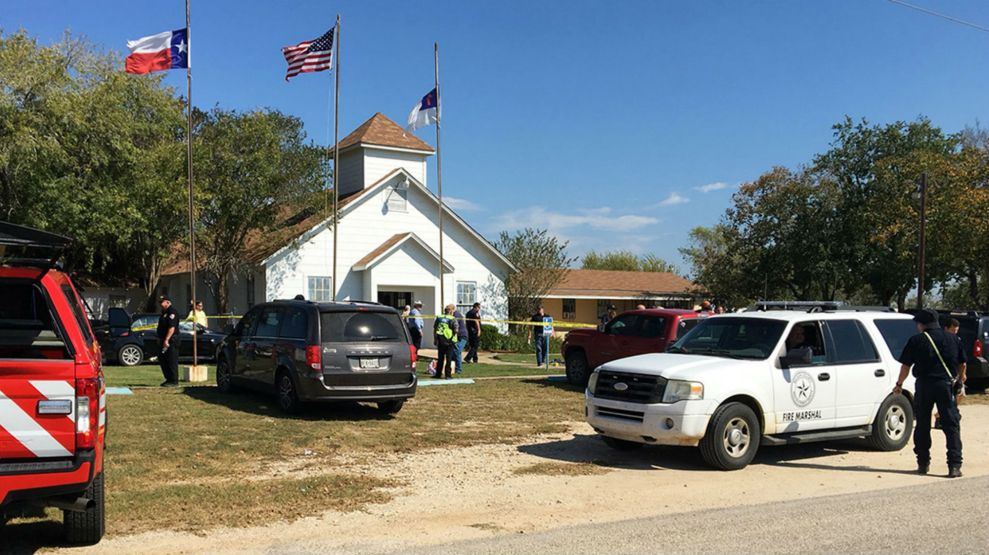 Emergency responders in front of a church in Sutherland Springs, Texas. KSAT/AP

A shooting at a church in Sutherland Springs, Texas, on Sunday morning left more than 20 people dead and 20 more wounded, though figures are yet to be confirmed, according to the Associated Press.  The gunman is also reportedly dead.

The gunman opened fire at around 11:30 a.m at First Baptist Church, and police and FBI have now secured the scene, KSAT 12, a local news station, reports. Relatives and friends of the victims remained near the church to hear news of their loved ones, according to a KSAT reporter on the scene.

Families in tears wait to see if their family and friends are safe. Praying for the safety of all those involved. pic.twitter.com/yjzK7lZJ1S

“My heart is broken,” Wilson County Commissioner Albert Gamez Jr. told CNN. “We never think where it can happen, and it does happen. It doesn’t matter where you’re at. In a small community, real quiet and everything, and look at this, what can happen.”

President Trump, who is on a tour of Asia, responded to the shooting in a tweet, noting that he is monitoring the situation form Japan. “May God be w/ the people of Sutherland Springs, Texas,” he wrote.

“Our prayers are with all who were harmed by this evil act,” Texas Gov. Greg Abbott tweeted. “Our thanks to law enforcement for their response.”

This is a breaking news story. We will update this as more information becomes available.