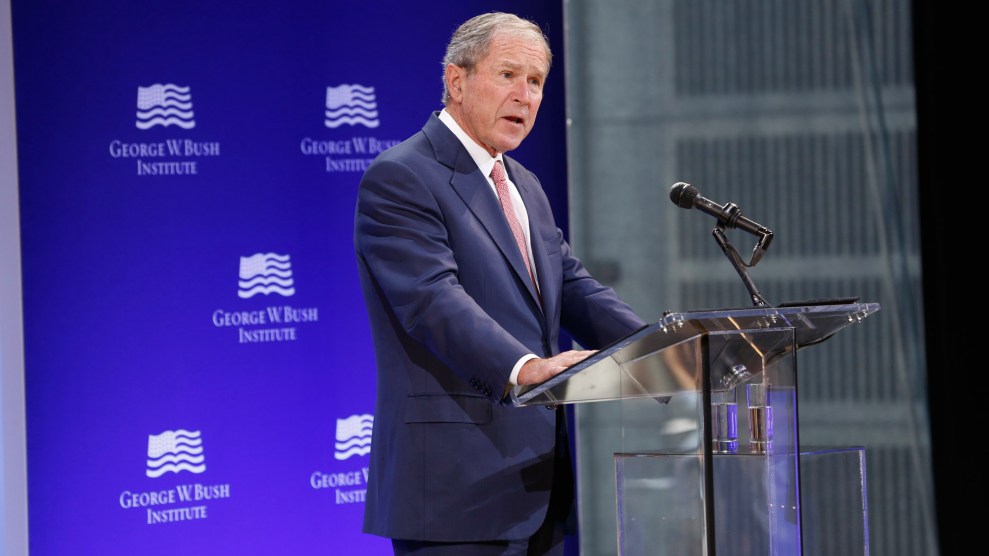 At a speech on Thursday, former president George W. Bush condemned the bigotry and nativism that he says are currently underpinning modern American politics. While he didn’t mention the current president’s name, there was little doubt about who he was denouncing for threatening American values.

“The American dream of upward mobility seems out of reach for some who feel left behind in a changing economy. Discontent deepened and sharpened partisan conflicts,” Bush told an audience at a George W. Bush Institute event in New York. “Bigotry seems emboldened. Our politics seems more vulnerable to conspiracy theories and outright fabrication.”

Bush added that he saw a decline in support for democracy thanks to a “combination of weariness, frayed tempers, and forgetfulness.” “We’ve seen nationalism distorted into nativism, forgotten the dynamism that immigration has always brought to America,” he said. “We see a fading confidence in the value of free markets and international trade, forgetting that conflict, instability, and poverty follow in the wake of protectionism. We’ve seen the return of isolationist sentiments, forgetting that American security is directly threatened by the chaos and despair of distant places.”

Bush, who has largely stepped away from politics since the end of his term, also warned that the attacks on US democracy from foreign actors, alluding to Russia’s interference in the 2016 election, requires securing and protecting “our electoral system from subversion”—another subtle rebuke of President Trump, who still openly questions the consensus that Russia meddled in the election.

“[W]e know that when we lose sight of our ideals, it is not democracy that has failed,” Bush said. “It is the failure of those charged with preserving and protecting democracy.”

George W. Bush: “Bigotry or white supremacy in any form is blasphemy against the American creed.” pic.twitter.com/ZmDDUbjNLT

When asked for his thoughts on Bush’s speech, Trump claimed, “I didn’t see it,” according to a pool report.

Watch the full speech below: