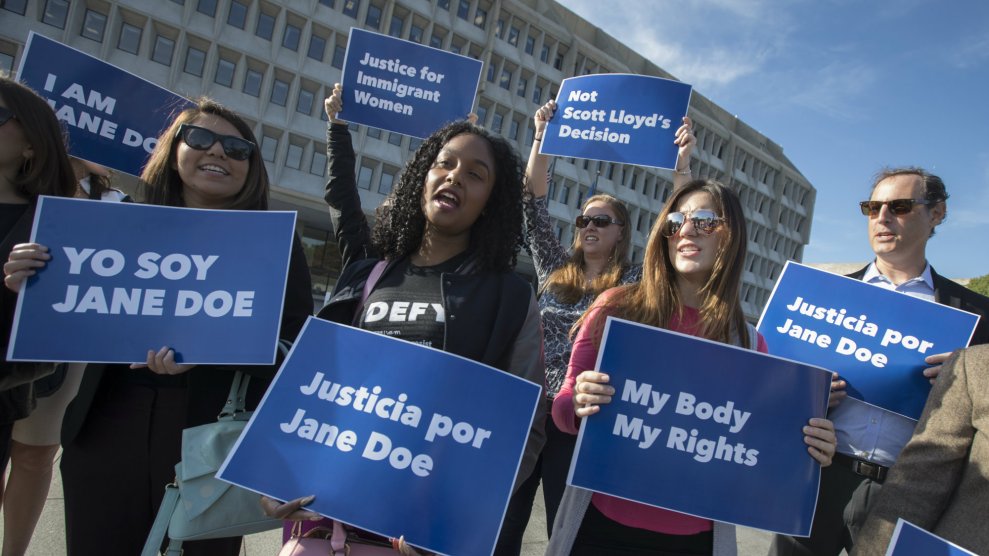 Activists with Planned Parenthood demonstrate in support of a pregnant 17-year-old seeking an abortion who's being held in a Texas facility for unaccompanied immigrant children.J. Scott Applewhite/AP

The undocumented minor who’s been fighting for her constitutional right to an abortion finally underwent the procedure on Wednesday morning after the government tried to stop her for more than a month. This comes after an appeals court ordered the Trump administration yesterday to allow the teen, who’s been referred to as Jane Doe and is being held in a federal refugee shelter in Texas, to get the procedure.

“I was placed in a shelter for children,” Doe wrote in a statement released today. “It was there that I was told I was pregnant. I knew immediately what was best for me then, as I do now—that I’m not ready to be a parent.”

Even after she obtained private funding, transportation, and a court order, the federal Office of Refugee Resettlement for weeks refused to allow Doe to leave the shelter for her abortion. Texas has a ban on abortion after 20 weeks of pregnancy, and Doe was about 16 weeks along by the time she was able to get the procedure.

In court, lawyers for the Justice Department had argued that her confinement to the shelter didn’t constitute a substantial obstacle to obtaining an abortion because she was free to return to her home country for the procedure.

“Justice prevailed today for Jane Doe,” Brigitte Amiri, a senior staff attorney with the ACLU’s Reproductive Freedom Project who worked on the case, said in a statement. “But make no mistake about it, the Administration’s efforts to interfere in women’s decisions won’t stop with Jane. With this case we have seen the astounding lengths this administration will go to block women from abortion care.”