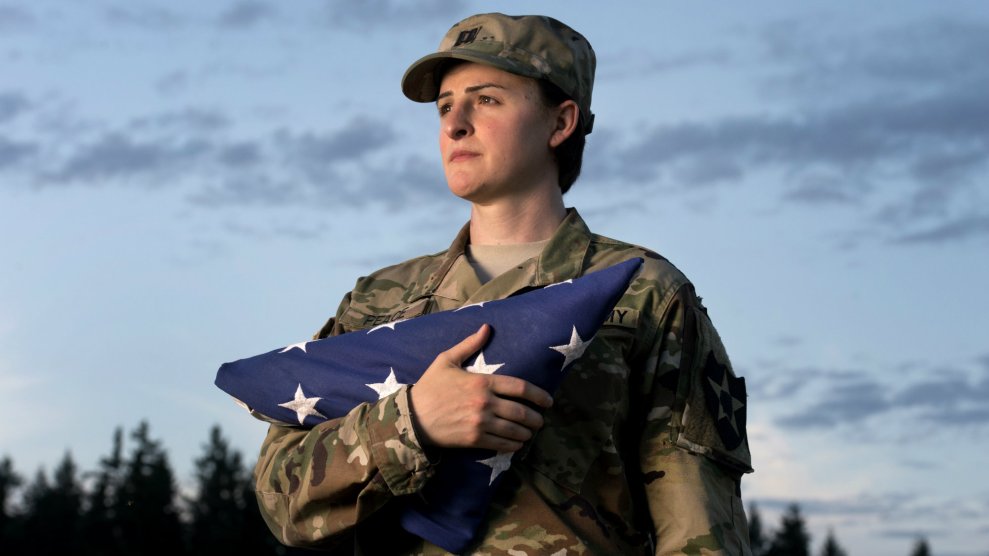 Army Capt. Jennifer Peace enlisted in 2005 and has been vocal in opposing the administration's ban on transgender service members. Drew Perine/AP

The Department of Justice on Wednesday asked a federal court to dismiss a lawsuit challenging President Donald Trump’s ban on transgender troops in the military. The suit, filed by the National Center for Lesbian Rights and GLBTQ Legal Advocates & Defenders, is one of several lawsuits challenging the new policy.

In it’s motion to dismiss, the DOJ argues the plaintiffs—which include five unnamed service members and two people planning for careers in the military— have not been harmed and therefore do not have standing to sue. The government argues the “allegations are obviously speculative and do not support standing at this stage,” pointing out that Secretary of Defense James Mattis is currently developing a plan for implementing the ban and that transgender people who are already serving can remain in the military for now. (The military is already rejecting new recruits who are transgender).

“Right now I’m in a limbo; if the policy isn’t stopped, I won’t be able to go back to the academy and graduate from the academy,”

The legal team challenging the ban rejects this argument, pointing to Regan Kibby, a 20-year-old midshipman at the US Naval Academy. Upon graduation, Kibby would be commissioned as an officer in the Navy if it weren’t for the transgender ban. “Right now I’m in a limbo; if the policy isn’t stopped, I won’t be able to go back to the academy and graduate from the academy,” Kibby tells Mother Jones. “A ban on enlistment is the same thing as a ban from graduating from a service academy.”

Shannon Minter, the legal director of NCLR, explains one of the plaintiffs in the service is already being sidelined and denied opportunities. “Naturally, this is going to happen when commanders know that any transgender service member is going to be ineligible to remain in the military,” says Minter. “You’re not going to invest in that person. you’re not going to send them for training, you’re not going to give them increased responsibilities. You’re going to prepare for their imminent separation.”

The lawsuit against Trump and other government officials in charge of implementing the ban alleges that transgender service members are being denied medical care. The DOJ filing disputes this, saying none of the plaintiffs “have been denied transition-related medical care” and that the current temporary rules prohibit denying such care. But Minter counters that he believes one of his clients is in fact being denied such treatment. “We’re trying to get to the bottom of that ourselves,” Minter says. “What is absolutely certain is surgeries that were scheduled for one of our plaintiffs were cancelled. Then he was told it was back on. Then he was told again no it’s not back on.”

Minter characterizes the DOJ filing as “evasive,” saying that it doesn’t try to defend the ban based on its merits and simply claims the military should have the authority to implement such a plan. The administration argues it has substantial leeway because courts “have upheld exclusionary policies in the military while at the same time invalidating similar policies in the civilian sphere.”

“They don’t even attempt to argue that there is actually any good reason to treat transgender people differently,” Minter says. “That is actually quite remarkable and very telling. Presumably, if they had some good reason to do that they would be telling us in the court what it is .”

NCLR and GLAD have until October 16 to file a response. Then the court will set a hearing date and rule on the matter. Minter says the case is on an “expedited schedule,” and a ruling could come as early as the end of the month.