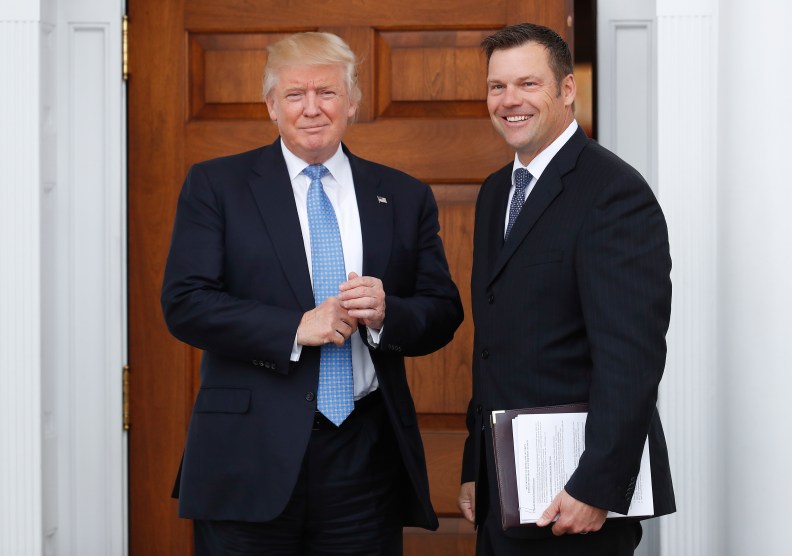 Kansas Secretary of State Kris Kobach, the vice chair of President Donald Trump’s election integrity commission, urged the Trump administration to weaken a key federal voting law, according to documents released by a federal court on Thursday. Kobach called for amending the 1993 National Voter Registration Act, which requires states to offer voter registration at the DMV and other federal agencies, to allow states to require proof of citizenship in order to register—a requirement that has blocked tens of thousands from the polls in Kansas.

On November 20, 2016, Kobach met with Trump at the president-elect’s golf club in Bedminster, New Jersey. Kobach was a top adviser to Trump on immigration and voting issues and at the time was under consideration to lead the Department of Homeland Security. As he greeted Trump, Kobach was photographed holding a white paper outlining the “Kobach Strategic Plan for the Next 365 Days.”

Though partially obscured, the document revealed a wish-list of radical policies for the Trump era that included “extreme vetting” and tracking of “all aliens from high-risk areas,” reducing the “intake of Syrian refugees to zero,” deporting a “record number of criminal aliens in the first year,” and the “rapid build” of a wall along the US-Mexico border.

At the bottom of the document was a section called “Stop Aliens From Voting,” where Kobach said he wanted to “Draft Amendment to National Voter Registration Act to promote proof-of-citizenship requirements.” On Thursday, in response to a lawsuit from the ACLU, a federal court ordered Kobach to release the document to the public, along with a draft of his proposed amendment. Those documents show how Kobach would alter one of the country’s most important voting rights laws by adding a new requirement that would make it much more difficult for Americans to register. (Kobach wrote to Trump’s transition team the day after the election and made the same policy recommendation.)

Kobach’s proposal is modeled after a law in Kansas requiring citizenship documents to register to vote, such as a birth certificate, a passport, or naturalization papers. Since the law went into effect in 2013, one in seven Kansans trying to register has been prevented from doing so. Nearly half of those 30,000 people have been under the age of 30. A federal appeals court blocked a key part of the law last year, ruling that “there was an almost certain risk that thousands of otherwise qualified Kansans would be unable to vote in November.” Kobach has appealed that ruling.

Kobach said the law was necessary because “the illegal registration of alien voters has become pervasive,” although as secretary of state he’s prosecuted only two non-citizens in Kansas for voting illegally, out of 1.8 million registered voters. (Kobach also defended Trump’s debunked claim that 3 to 5 million people voted illegally in the November presidential election.)

Kobach fought relentlessly to shield the document he shared with Trump from the public. In April, federal magistrate judge James O’Hara rebuked Kobach for telling the court that “no such document exists” concerning how he’d alter the National Voter Registration Act. Two months later, O’Hara sanctioned Kobach and fined him $1,000 for “deceptive conduct and lack of candor.” When Kobach appealed, another federal judge upheld the sanction and said Kobach had “a pattern” of “misleading the court.”

Though Vice President Mike Pence, who chairs the election commission, said the panel had “no preconceived notions,” the release of Kobach’s secret documents lends credence to fears by voting rights advocates that Kobach will use his position to exaggerate the threat of voter fraud in order to pursue policies that make it harder to vote.