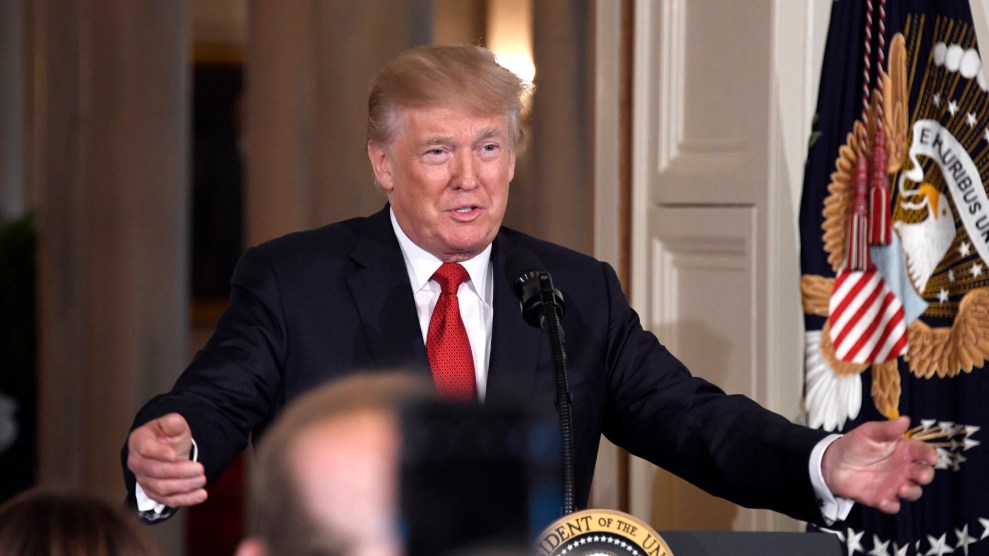 Frustrated by Congress’ inability to pass a bill to repeal the Affordable Care Act, President Donald Trump has decided that the next best thing is to tank the country’s health care system, even if that raises premiums and leaves parts of the country without any insurance plans on the individual market.

The White House announced on Thursday night that it will cut off government payments to health insurance companies for something called cost-sharing reductions (or CSRs). This part of the Affordable Care Act mandates that insurance companies offer lower out-of-pocket costs, such as deductibles and copays, to millions of low-income Americans, and promises to reimburse the companies. With Trump’s action, insurance companies will still be required to offer the cheaper plans dictated by the CSR system, but they won’t get the promised government funds to offset those costs. That’ll cause premiums to skyrocket for middle-class families and could prompt many insurers to quit selling plans on the Obamacare exchanges.

In August, the Congressional Budget Office examined what would happen if Trump cut off CSR payments and concluded that premiums would increase by 20 percent. But that wouldn’t price too many people out of buying insurance, the CBO found, since the vast majority of people buying insurance on Obamacare’s markets receive subsidies insulating them from those price shocks. (Households earning more than 400 percent of the poverty line don’t receive those subsidies, so many middle-class families will bear the full brunt of the premium increases.) But Trump’s move will cost the federal government, the CBO determined, by forcing it to spend more on subsidies to keep premiums affordable for lower-income households. It will add $6 billion to the deficit in 2018 and more in the future, adding up to $194 billion in extra government spending if CSR payments are shut off through 2026.

Since Trump has been threatening this action all year, many insurance companies already priced this possibility into their 2018 rates. But companies that didn’t might now pull out of selling insurance in Obamacare’s marketplaces, just weeks before open enrollment for those plans starts in November. The CBO estimated that 5 percent of the US population could end up living in a place with no insurance companies on the individual market.

There is a legitimate debate about the legality of paying CSRs. Any plain reading of the law shows that Congress wrote it intending for CSRs to be paid, but the people who wrote the bill might have skipped an important technical step in affirming that. (The details are complex; for more, read this great Vox explainer.) But in typical fashion, Trump sidestepped his White House’s more evenhanded press releases about legal concerns and offered his true views in a tweet on Friday morning:

The Democrats ObamaCare is imploding. Massive subsidy payments to their pet insurance companies has stopped. Dems should call me to fix!

The president’s scheme to blame Democrats for future Obamacare problems likely won’t work. Poll after poll has shown that the president and Republicans will be held accountable if the health insurance markets crater under his watch. And the underlying facts back that up. Obamacare certainly had issues before Trump became president, but it was mostly working. Premiums were stabilizing. Insurers were making profits on their plans sold on the individual market. 2018 was on track to have zero parts of the country where no insurers were selling plans. Yes, the sticker price for premiums in certain parts of the country was too high, making coverage expensive for many middle-class families. But the law wasn’t about to enter a death spiral, since most people who buy insurance through Obamacare’s markets qualify for government subsidies, which cap their premium payments as a percentage of their income.

If the stability of the law’s markets starts to change next year, voters will have one person to blame, and it’s not the ex-president the law is nicknamed for. Since taking office, Trump has systematically whittled away at the Affordable Care Act. He’s scaled back efforts to encourage people to sign up for insurance and cut the number of weeks for open enrollment in half, and he signed an executive order earlier Thursday that could allow healthy people to buy skimpier coverage and drive up costs for sicker people. At each step, Trump has made it clear that he’s made these decisions not based on principles of how health care should work in the country, but instead because he wants to see the law fail so he can blame it on Democrats. The president has shown little concern that his grandstanding cause millions of people to lose health insurance.