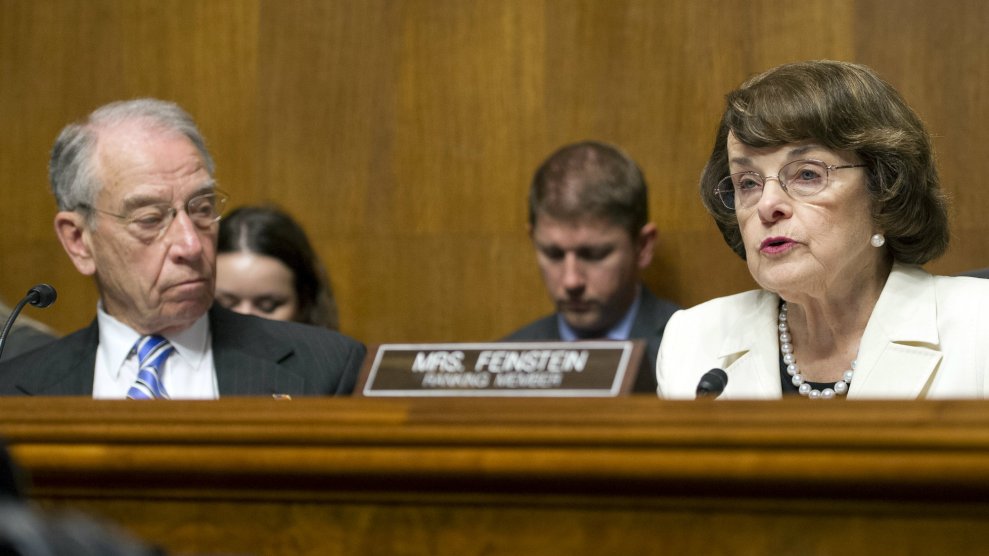 Sen. Chuck Grassley and Dianne Feinstein at a May 10, 2017 Judiciary Committee hearing.Ron Sachs/CNP via ZUMA Wire

The committee’s once bipartisan investigation into whether President Donald Trump obstructed justice or his campaign colluded with Russia has hit a partisan wall, with Republicans and Democrats saying they will now conduct their own probes. “We made the decision to go and carry it out ourselves,” Feinstein told Mother Jones on Tuesday. “They can go ahead and do whatever it is they wanted to do.” A Grassley spokesman also said the chairman had decided to proceed with a Republican-only investigation.

Judiciary’s Russia investigation is the latest congressional probe to stall out over GOP efforts to pursue matters Democrats see as gambits to distract or provide cover for the Trump administration. The partisan sparring within the committees looking into various aspects of the Russia scandal has caused concern among Democrats and other observers that Republicans will fail to complete rigorous probes but will still declare their investigations did not find significant collusion between the Trump campaign and Russia.

Feinstein this summer agreed to allow Grassley, an Iowa Republican, to pursue tangential probes that appeared aimed at appeasing conservatives wary of investigations of a Republican president. This summer Feinstein signed onto letters Grassley sent seeking information from former Attorney General Loretta Lynch regarding her role in the Justice Department’s investigation of Hillary Clinton’s use of private email. But Feinstein said Tuesday that their agreement broke down in recent weeks as Republicans insisted on focusing on inquiries into matters such as the sale of a uranium company to Russians while Clinton was secretary of state, and allegations that the Justice Department soft-pedaled its Clinton probe. “The interests are different. We want to do different things than they want to do,” Feinstein said. “Their staff appears to want to take this into a different venue, and that’s Hillary Clinton, and it’s Loretta Lynch. We think it’s collusion and obstruction of justice.”

Grassley last Wednesday sent 14 inquiry letters on matters related to the Russia scandal. The panel previously interviewed Donald Trump Jr. and has sought an interview with Paul Manafort, Trump’s former campaign chairman, about the June 9 Trump Tower meeting where Trump Jr. hoped to receive damaging information on Clinton from the Russian government. Grassley’s Wednesday letters include requests for interviews or information from the other participants in the meeting, including Jared Kushner, Trump’s son-in-law, and Russian lawyer Natalia Veselnitskaya. Grassley on Wednesday also sent a letter seeking an interview with Lynch and another demanding information from Dan Richman, a law professor and friend of James Comey who shared with the New York Times memos that the former FBI director wrote about his interactions with Trump prior to his firing. He sent other letters seeking information from current and former Justice Department officials regarding the Clinton email probe as well as Comey’s firing. Other letters went to various people with a role in the Obama administration’s 2010 approval of the sale of a mining company that gave the Russians control of 20 percent of American uranium reserves.

Taylor Foy, a spokesman for Judiciary Committee Republicans, said via email that Grassley sent the letters after discussing them with Feinstein “to avoid further delay in reaching an agreement to co-sign them.” Feinstein told Mother Jones that claim is false. “They sent them without me,” she said. “We were told after the fact.” Feinstein said that Democrats “are proceeding ahead” with their own letters, focusing particularly on obstruction of justice. Feinstein faulted Judiciary Committee staff for pushing Grassley in a partisan direction. She said her relationship with the Iowa Republican is good, but the senators agreed in a recent meeting to pursue their own investigative tracks.

The breakdown on the Judiciary Committee comes as Republicans on three House committees have also taken up investigative topics that Democrats and other critics see as tangents aimed at drawing attention away from the Trump administration’s ties to Russia. On Tuesday, House Intelligence Committee Chairman Devin Nunes (R-Calif.) announced a joint probe by his panel and the House Oversight and Government Reform Committee into the uranium deal that Grassley is also looking into. At a news conference, Nunes grew testy as multiple reporters asked him how his role in the probe jibes with his pledge earlier this year to step aside from his panel’s investigation into Russian interference. Nunes’ decision to step aside came after he was forced to admit he had secretly briefed the White House on findings. He said Tuesday that he has not talked to the White House about the uranium matter but will do so “if appropriate.” The House Oversight committee and House Judiciary Committee on Tuesday announced a separate probe into the Justice Department’s handling of its inquiry into Clinton’s email practices.

Democrats derided these investigations as a Republican smokescreen. “These investigations were initiated on a partisan basis, and will shed no light on Russia’s interference in the 2016 election, but then again they are not intended to do so,” House Intelligence Committee ranking member Rep. Adam B. Schiff (D-Calif.) said in a statement.

The partisan brinkmanship that has all but derailed the Russia investigations launched by the Senate Judiciary Committee and House Intelligence Committee leaves the Senate Intelligence Committee panel the lone panel where both parties appear committed to carrying out a bipartisan inquiry. But even that committee’s chairman, Sen. Richard Burr (R-N.C.), has hesitated to defy Trump. At a news conference this month, he refused to endorse the conclusion by US intelligence agencies that Russia interfered in the 2016 election to help Trump win election.