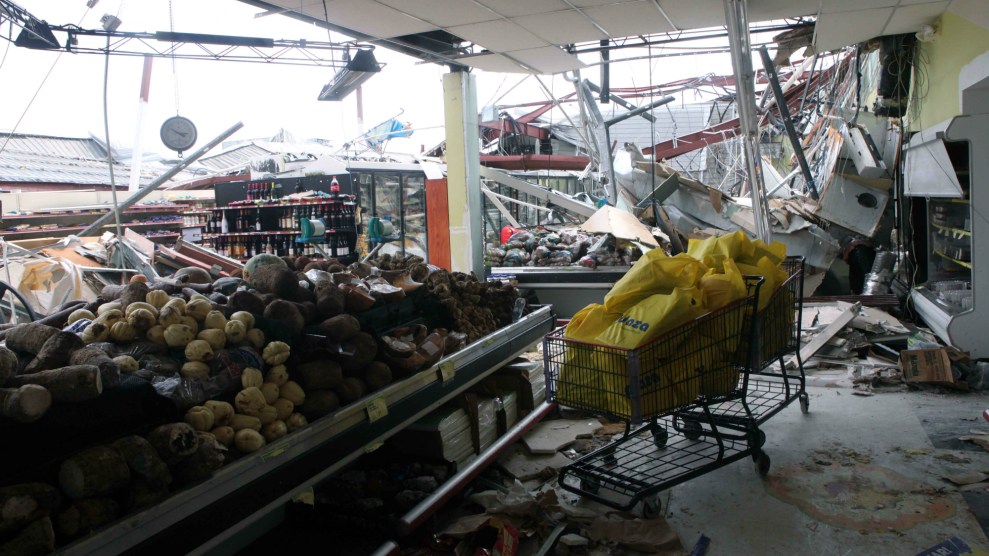 Erik Rivera was supposed to be at work at 6 a.m. on Wednesday, September 20. Like most other people on the island, he knew the storm was coming but he didn’t want to risk his job at the Plaza tu Supermercado, a large grocery store on Calle 3 in Guayama, a town on the southeastern coast of Puerto Rico.

“The night before, my boss called me and told me to stay put,” the 24-year-old with short-cropped dark brown hair tells me on Thursday when we meet at the entrance to the store. “The storm was too dangerous.”

By the time Rivera and other employees were able to return several days later, the store as it once stood was gone. “The word on the street is that somebody broke a window on the night of the storm to get inside and steal merchandise,” he says. “Then the roof got ripped off.”

As the roof of the grocery store, one of the largest in the area and part of a large chain on the island, was getting taken away by the hurricane, the store’s steel frame twisted under the force of the wind, leaving the metal structure partially collapsed in some places. Now, the food that was left sits rotting on the shelves, a perfect breeding ground for the hordes of flies and mosquitos that have occupied the shell of the store. Bees—which have been hit incredibly hard on the island since Hurricane Maria, due to the island’s decimated agriculture sector—swarm anything even remotely sweet. Colorfully decorated cakes are growing moldy in clear refrigerators that haven’t had power in more than two weeks. Jars of mayonnaise have fallen to the floor and broken, and the creamy goop has congealed with soiled cardboard and other debris to form a curdled chunky mess that gives off the odor of death and has become home for mice and other vermin. In some places, the debris—boxes and jars of food, glass, shelving material—is several feet deep, and each squishy step on it pushes out dozens of the omnipresent flies, mosquitos, and bees.

According to the latest government estimates, more than 73 percent of the island’s grocery stores have reopened. But many people have reported that even the open stores are limiting what can be bought and the quantity, and many lack the fresh food options found in a regular grocery store. In some places, shoppers are forced to line up and enter the store in small groups.

Standing at what was once the entrance of Plaza tu Supermercado, Rivera says it has had to hire armed guards at night to prevent further theft. He tells me that prior to Maria, the store employed about 150 people. Half of them have since been relocated to other stores that are in better condition but at reduced hours; the rest are currently without work. The store location had administrative offices on the second floor, and there was a Somos Cash n’ Carry right next door. Both are destroyed.

On the day I was there, Rivera and several other men, former employees of the store, were helping the manager retrieve as many important papers as they could from what was left of the upstairs administrative offices.

“It’s really bad,” Rivera says, rubbing his hands over his face, trying to process it all.

Hurricane Maria made landfall about an hour east of this town of about 42,000—known for the major power plant on its edge and as a major agricultural player—making it perilously close to where the heaviest winds of the storm’s eye first lashed the island. Electric poles, made of wood, metal, and concrete, are down all over town. In some places, the electric poles have fallen on top of houses, wires and all. Over at the town’s emergency operations center, we find agent Walter Garcia, the senior state police official on duty. He tells us the entire town was hit hard; it is still without electricity or reliable communications networks, the open remaining grocery stores are limiting what residents can buy, and 800 to 1,000 refugees from the town and the surrounding area are jammed into shelters in schools, which have become smelly and unhygienic.

“People here need water and food,” he tells us. “The food we have from the military is not enough for the people, and neither is the water. We’re living day by day.”

Down the street from the grocery store, Eduardo Meléndez, a local photojournalist I’m traveling with, and I run into Geraldo Ríos, part owner of a bar called Patios y Tapas.

“Our business was new,” he tells us dejectedly, surveying the decimated shell of his business. His bar is also partially missing its roof. “We remodeled everything. And now we’ve lost everything.”

Across the street, Ríos points to a factory he says used to produce plastic containers before the storm. He tells us it was running 24 hours per day. “Now, nothing,” he says. The gray factory with blue trim has lost at least half of it’s metal siding, which has, in some places, been peeled back like opening a can.

Back at the store, I talk with Rivera about how bad everything looks right now, how people—his friends and colleagues—lost their jobs, and what’s going to happen now. Another man with a hardhat and worn hands from digging through debris overhears us talking.

“It will be OK,” he says, without giving his name. “God does not make weak things.”