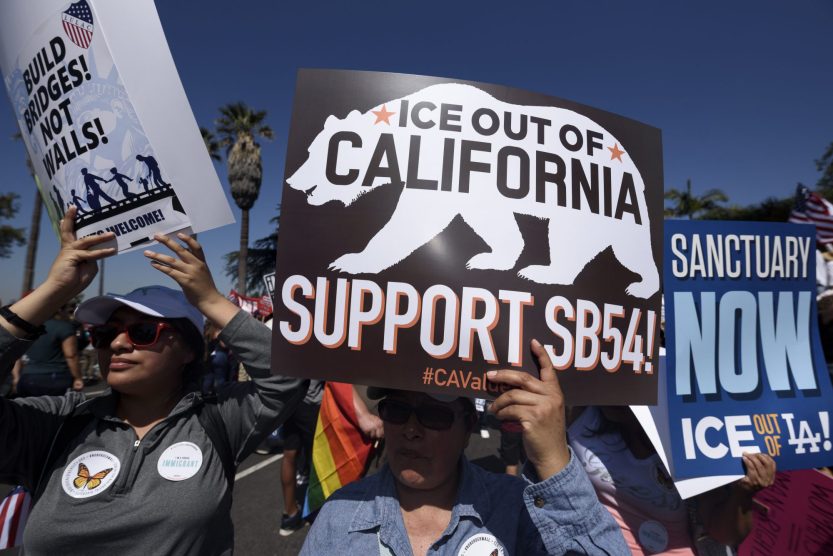 In response to the bill California Governor Jerry Brown signed Thursday that officially made California a “sanctuary state,” Immigration and Customs Enforcement (ICE) has issued a chilling statement threatening massive arrest operations and the possibility of moving those arrested to detention facilities outside of the state.

The state, according to a Pew estimate, houses the largest population of undocumented immigrants in the US. Their status has been threatened amid an ongoing federal crackdown on illegal immigration, carried out on the ground by ICE. The California Values Act, Senate Bill 54, will now ban nearly all communication and cooperation between local authorities and ICE when it goes into effect in January 2018, essentially removing any support ICE previously had from local and state law enforcement.

“ICE will have no choice but to conduct at-large arrests in local neighborhoods and at worksites, which will inevitably result in additional collateral arrests,” a statement from ICE Acting Director Tom Homan, released on Friday, reads. “ICE will also likely have to detain individuals arrested in California in detention facilities outside of the state, far from any family they may have in California.”

It’s likely that Brown expected a response like this, as he released a statement yesterday upon signing the bill that stresses that the legislation does not prohibit ICE from, well, anything. “This bill does not prevent or prohibit [ICE] or the Department of Homeland Security from doing their work in any way. They are free to use their own considerable resources to enforce federal immigration law in California,” he wrote. “[T]his bill strikes a balance that will protect public safety, while bringing a measure of comfort to those families who are now living in fear every day.”

At least for now, the state and ICE seem to be in a standoff.

“Despite the severe challenges that this law creates for ICE, we remain committed to our public safety mission,” Homan says in the statement, “and we will continue to do our sworn duty to seek out dangerous criminal aliens and other immigration violators.”